The Essential A&E Picks for December 21-27 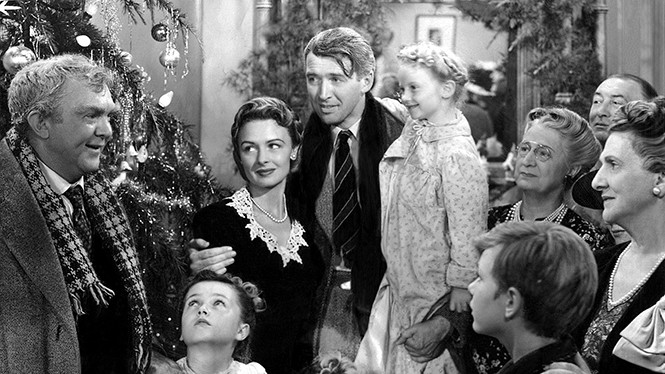 THURSDAY 12/21
It's a Wonderful Life
Every year, many Americans celebrate the holiday season by enjoying the 1946 Frank Capra classicIt's a Wonderful Life. And every year, local free screenings are an opportunity to be reminded—or to learn for the first time—that most of what you think you know about this movie as cheesy holiday Americana is false.

While plenty of folks remember the story's happy ending, with George Bailey (James Stewart) running through the snowy streets of Bedford Falls wishing "merry Christmas, everybody," and his daughter blankly reading her line about angels getting their wings when a bell rings, there's plenty of uncomfortable material bubbling beneath its surface. Most obviously, it's the story of a divine suicide intervention, as the guardian-angel-in-training Clarence (Henry Travers) attempts to show a despondent George, whose world is falling apart around him, that his life has value.

Beyond that, however, Capra and his writers craft a story that's far from a simplistic celebration of small-town America. George's domesticity and eventual role running the building and loan are part of a war he's fighting within himself over his big dreams for going out into the world; his conflicted not-quite-a-proposal to Mary (Donna Reed) is one of strangest such scenes in movie history. There's nothing easy about the way Capra presents the tension between individual desires and a sense of communal responsibility. During a Christmas season at the end of a particularly rough year, where pulling together is practically a moral necessity, maybe that's one of the most wonderful ideas we can explore. (Scott Renshaw)

FRIDAY 12/22
Harry Potter musical performances
In the 20 years since J.K. Rowling'sHarry Potter and the Sorcerer's Stonefirst hit bookstore shelves, the wonderful wizarding world has transcended its status as a modern children's classic into something of a nontraditional holiday staple. From the Harry Potter movie marathons airing throughout December to the local Christmas in the Wizarding World interactive exhibition and store at the Shops at South Town in Sandy, there's no shortage of magic in December. And if you're interested in live performances inspired by that world, there are other Utah offerings as well

For those wanting a less by-the-book take on the Harry Potter universe, Ogden's Ziegfeld Theater presents its now-annual performance of A Fairly Potter Christmas Carol. Concluding the company's 2017 season, the musical lovingly satirizes the witches and wizards, while also throwing in elements from other holiday classics such as A Christmas Carol and How the Grinch Stole Christmas.

If you want to sit back and watch the films in style, the Utah Symphony has the perfect program the weekend leading up to Christmas Eve. As part of their Film In Concert Series, the symphony performs John Williams' score to Harry Potter and the Chamber of Secrets while the film itself plays on a giant screen for the audience to enjoy. (Kylee Ehmann)

SATURDAY 12/23
Viva La Diva's Jolly Holiday with the StarZ
This Christmas weekend you'll find a little bit of everything at Viva La Diva's holiday show. Step through the time capsule with this island of larger-than-life-sized misfit toys as Bette Midler, Dolly Parton, Mary Poppins, the Grinch and the best Bloody Mary in town share the roof for a night of music, pop culture and live comedy.

A resounding crowd favorite the Viva La Diva celebrity impersonation show and its creator, Jason CoZmo, recently nabbed a small arsenal of QSaltLake's Fabby Awards. Every show is unique, and you never know when you might find yourself a part of the performance, so guests are encouraged to dress in their most inspired holiday outfits.

For CoZmo, the breadth of the show's audience reach and involvement is one of the most rewarding aspects of the inclusive stage production. According to the actor and activist, the show is purposefully designed that way. "Our demographic is everyone ... it's like Disneyland!" he says. "There's something for the whole family to relate to and enjoy."

CoZmo knows what he's talking about, since he started his performing career at Disneyland, but thanks to Viva La Diva there's a new happiest place on Earth right in the heart of Strange Lake City. So whether you're young (but not too young), old, liberal, conservative, gay, straight or anywhere in-between, you're welcome at Viva La Diva because life is a spectrum—and we're all misfits here. (Samantha Herzog)

SUNDAY 12/24
Snowbird Christmas Parade
Aside from great ski terrain, Snowbird Ski Resort is also a source of regular entertainment, including everything from live music to large-scale festivals like the annual Oktoberfest. And one exciting upcoming event is the annual Christmas Eve parade and fireworks show.

The tradition begins at approximately 6 p.m. on Dec. 24 at the Plaza Deck. Keep warm near the celebratory bonfires and watch the hills light up as skiers descend during the torchlight parade, shortly followed by a bright fireworks display. Kids need not be left out of the celebration: As it turns out, Santa Claus doesn't just climb down chimneys—he rappels down them. To prove it, the Jolly One is scheduled to rappel from one of Snowbird's trams immediately after the parade.

In the midst of the Christmas excitement, there's also time to take a step back and contemplate a year hopefully well lived, with a candlelit service starting at 7 p.m. Reverend Greg Johnson of Standing Together gives a short sermon and musician Kevin Flynn performs.

Exact locations for the parade and fireworks are dependent on weather conditions. Plan to meet at the Plaza Deck, close to 5:30 p.m. to ensure parking availability. Be sure to check Snowbird's website for details as the day approaches. For the candlelight service, attendees are asked to congregate at Snowbird's Rendezvous restaurant. (Casey Koldewyn)