Pioneer Theatre Co.: Once On This Island, Jay Pharoah, The Bachelor Live

FRIDAY 2/21
Pioneer Theatre Co.: Once On This Island
On one level, the 1990 musical Once On This Island deals with challenging issues like the legacy of colonialism. Yet cast member Cicily Daniels believes that this tale of magic and myth allows for a joyful exploration of those themes: "I pretty much dare anybody to walk into the theater, and walk away not feeling more open and alive and connected to their own humanity."

Adapted by Lynn Ahrens and Stephen Flaherty (Ragtime) from a 1985 novel by Rosa Guy, it tells the story of Ti Moune, a Caribbean peasant girl who falls in love with Daniel, one of the mixed-race descendants of French colonists who live on the opposite side of her island. As stories of star-crossed lovers sometimes go, Ti Moune's love is complicated, including a promise to a god that she would trade her life for Daniel's.

The musical's framing device involves people relating Ti Moune's story to a little girl, and actor Daniels believes that meta-storytelling component makes the story richer. "I have a 2-year-old, and when you're telling a child a story, you try to make it bigger for her," she says. "That brings it to life for the whole audience."

That dynamic of sharing a myth with a child gives the powerful songs and narrative a real sense of purpose. "When you have to introduce the idea of death to a child, that's incredibly difficult," Daniels says. "But there's also a community that comes together in a moment of mourning. ... Lives are meaningful, and choices have impact beyond ourselves. That's something everybody wants to teach our children." (Scott Renshaw) 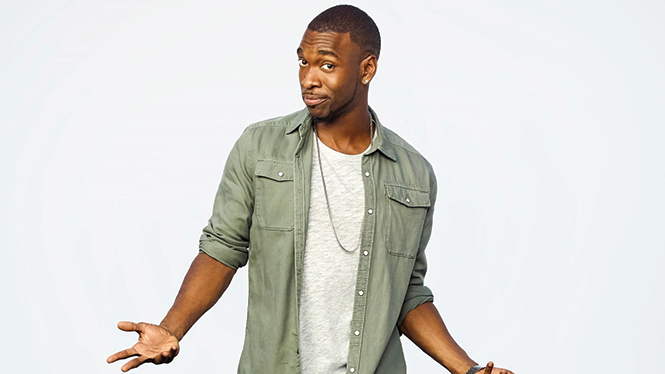 FRIDAY 2/21
Jay Pharoah
It's said that imitation is the most sincere form of flattery. If that's the case, Jay Pharoah has handed out plenty of compliments in his career. Known for his stellar impressions of Barack Obama, Denzel Washington, Kanye West, Will Smith, Jay Z and a host of others, he became a stand-out cast member during a six-year stint on Saturday Night Live from 2010-16.

Happily, Pharoah—born Jared Antonio Farrow—has been active ever since. He hosted the American Music Awards in 2016, appeared in a number of supporting film roles, and voiced animated characters on such series as Family Guy, Bojack Horseman and Robot Chicken, all of which allowed him to further share his varied vocal talents. And while he tried his hand at drama—successfully—in the Showtime drama White Famous and Steven Soderberg's psychological thriller Unsane, a visit to his website proclaims his primary credo: "I make people laugh."

That in itself is pretty profound considering that it often feels like there's little to laugh about these days. Fortunately, Pharaoh has plenty of experience, having performed professionally since he was 15. "When I got to the stage, it was like a release," Pharoah is quoted as saying on the website BrainyQuotes. "Because it was like, 'Oh, people like me. People like me. They're listening to what I have to say. They're not judging me on how I look; they're judging me on what I'm saying.' So to me, that's what's worth it, and that's what comedians have." (Lee Zimmerman)

FRIDAY 2/21
The Bachelor Live
Valentine's Day might have been last week, but that doesn't mean romance is dead. Bachelor Nation SLC, are you ready for the most dramatic live version of The Bachelor, yet? The Bachelor has been one of the most popular romantic franchises since its launch on ABC 18 years ago. This week, it brings series favorites Ben Higgins (Season 20) and Becca Kufrin (Season 22) to the Eccles Theatre to help one lucky local bachelor search for his chance at love.

Local ladies from the audience—who previously filled out an application online—will have the chance to be an onstage contestant, vying to win the bachelor's heart. And for those who aren't part of the live courtship activities, instead of merely vocalizing your opinion to the TV in your living room, you can finally have a say during the rose ceremony. Audience members who don't end up onstage can cheer on the participants, ask questions and even make suggestions. All the gossip, drama and romance fans love from the series will be live, up close and personal. The show includes games, challenges and get-to-know-you activities that lead up to multiple rose ceremonies.

The event's designated Salt Lake City bachelor, Crispin Calvert, is a self-proclaimed outdoor adventurer and firefighter who's excited about this unique experience to meet someone new. Contestants don't need to worry about purchasing a ticket, and VIP tickets are available for non-contestants. Come enjoy this one-night-only romantic whirlwind with your hometown. Who will get the final rose? (Kara Rhodes)

SATURDAY 2/22
Ballet West: Night of Shining Stars
In the lead-up to the final round of the Youth America Grand Prix, an international ballet competition that showcases some of the most promising dancers of the 2020 season, Ballet West hosts the Night of Shining Stars. Gracing the Capitol Theatre stage this weekend, the ballet luminaries of today will prepare to pass the torch to the stars of tomorrow.

This one-night-only event is headlined by dancers from American Ballet Theater, London's Royal Ballet, Ririe-Woodbury Dance Co. and Ballet West. In collaboration with Youth America Grand Prix, Night of Shining Stars is a national dance event that celebrates some of the most internationally-renowned dancers of our generation. Celebrated performers include Robbie Fairchild, Allison Walsh and Cesar Corrales. In a recent news release, Ballet West artistic director Adam Sklute said, "It is truly exciting to bring together this incredible and unprecedented collection of acclaimed artists under one roof, on one night."

Night of Shining Stars features dazzling performances from An American in Paris, Romeo and Juliet, The Greatest Showman, Now or Never, Ruth Ricordi Per Due and The Dream. "Events like Night of Shining Stars help expose our local audiences to some of the world's leading dancers that they might otherwise not have an opportunity to see," Sklute says via email. "It becomes a wonderful sharing event between companies and dancers. It's like hosting a grand dinner party!" (Ashley Stenger)