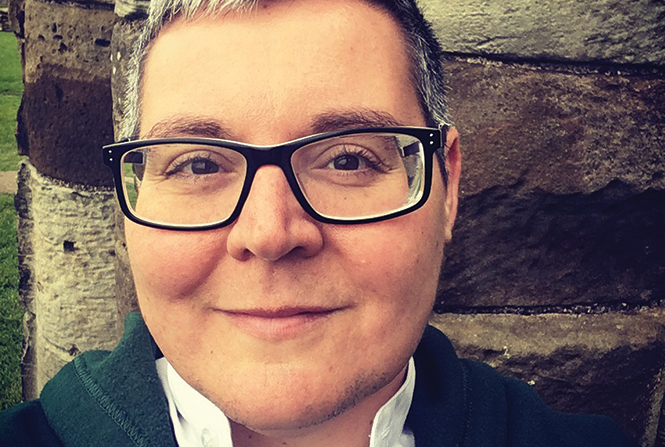 THURSDAY 2/27
Alex Iantaffi: Life Isn't Binary
We lead lives that leave little room for nuance. Things are either wrong or they're right, someone is good or they're bad, and we divide ourselves into "us" and "them."

But there is an alternative to this binary thinking that pervades nearly every aspect of our culture. Alex Iantaffi addresses the way non-binary thought can be expanded to create a healthier and more expansive worldview for everyone during a reading and discussion of their recent book Life Isn't Binary: On Being Both, Beyond, and In-Between.

The book, co-authored with Meg-John Barker, explores not only non-binary genders and sexualities, but also the ways in which binary thinking affects relationships, bodies, emotions and thinking. Iantaffi says binary paradigms dominate cultural conversations, even when reality is decidedly less clearcut. "Much of life happens in the muddy middle and, yes, this is often where we are the most uncomfortable, especially if we have not cultivated flexibility in our thinking," they say. "In a binary paradigm, there are fewer possibilities for all of us."

And Iantaffi means all of us. The book is intended for people of all genders and sexualities to enjoy and learn from. "I believe that much, if not all, binary thinking is deeply steeped in cultural trauma," they say. "If we are to heal, we need to address polarizations and divisions, which are fueled by binary thinking."

The reading is free and open to the public, but admission to the signing line requires purchase of a copy of the book from The King's English. (Kylee Ehmann)

"The experience of competing in Samba Queen is so wonderful that we wanted to be sure it was open to a larger community of samba dancers," says Indigo Cook, dancer and administrative assistant for Samba Fogo. "This year, we're also including a few other divisions to diversify the night and spice it up for the audience."

Celebrating traditions inspired by Rio de Janeiro's world-famous celebration, the evening raises money for educational programming provided by the nonprofit Samba Fogo, which aims to enrich the community with the culture of Afro-Brazilian music and dance. After performing a two-minute solo on stage with a live drumline, each contestant will be assessed a score based on dance ability, "Carnival Spirit" and ornate costuming, as judged by the audience and special guest Gia Bianca Stephens. In addition, the Samba Fogo band performs between competitors, and food and cash bar is available.

"We always approach the contest as a beautiful opportunity to come together as a community, while celebrating our personal beauty and power," Cook adds. "The experience, as both a contestant and audience member, is always so positive, filled with joy and fun, which matters much more than who wins at the end of the night." (Colette A. Finney)

WEDNESDAY 3/4
Jonathan Franzen: Utah Award in Environmental Humanities
Despite the reluctance of some to recognize the perils facing our environment, it's becoming clear that we can no longer ignore the threat climate change poses. The evidence is everywhere, from the increasing intensity of cataclysmic storms to the collapse of the glaciers. Given the resistance of certain politicians to take action—while often exacerbating the situation—it's important to recognize public figures who are willing to sound an alarm.

Writer and essayist Jonathan Franzen has positioned himself at the center of that effort, thanks to contributions outlining the intrinsic connection between the environment, nature's inhabitants and mankind itself. His novels—The Corrections,Freedom and his latest,The End of the End of the Earth—address the dangers inherent in ignoring this continuing crisis, and the implications that accompany any failure to address it.

It's appropriate then, that the University of Utah recognizes Franzen this year with its Award in Environmental Humanities. The honor celebrates essential leadership and expression, while carrying with it a $10,000 grant for those who take on the planet's environmental problems using tools of the humanities, such as creative expression, scholarly research, popular art forms and advocacy.

"We are especially excited to underline theimportant environmental contributions Franzen has made," Jeffrey McCarthy, director of the university's Environmental Humanities Program, said in a statement. "This award is the world's first prize in the field of environmental humanities. It celebrates our recipients while putting their goals in the spotlight." (Lee Zimmerman)

WEDNESDAY 3/4
Dear Evan Hansen
Periodically, a Broadway musical catches pop-culture lightning in a bottle, and transcends the usual limitations of the genre's audience: the grand theatricality of Les Misérables or Phantom of the Opera; the raucous comedy of Book of Mormon; the groundbreaking style of Hamilton. That kind of crossover appeal emerged for Dear Evan Hansen, the multi-Tony Award-winning 2016 show from the successful composing team of Benj Pasek and Justin Paul (La La Land, The Greatest Showman).

Like a lot of the most successful recent musicals, the subject matter itself doesn't immediately feel like the stuff of a hit. It centers on a troubled teenager named Evan Hansen (Stephen Christopher Anthony, pictured, in the touring production) whose therapist prescribes him the idea of writing letters to himself focusing on the positive things in each day. One of those letters takes a darker tone, and inadvertently ends up in the possession of a classmate named Connor who subsequently takes his own life. Evan becomes connected to Connor when it appears that the letter Evan wrote to himself is actually Connor's suicide note—and when Evan willingly amplifies the deception, it becomes part of a viral campaign that threatens to overwhelm Evan's life.

Filled with heartfelt songs like the anthemic "You Will Be Found," Dear Evan Hansen dives into the challenging issue of mental health struggles among youth with sensitivity and compassion. It's a story about how powerful the need for connection is—and a story like this can be its own way of connecting us to those whose voices we don't always hear. (Scott Renshaw)