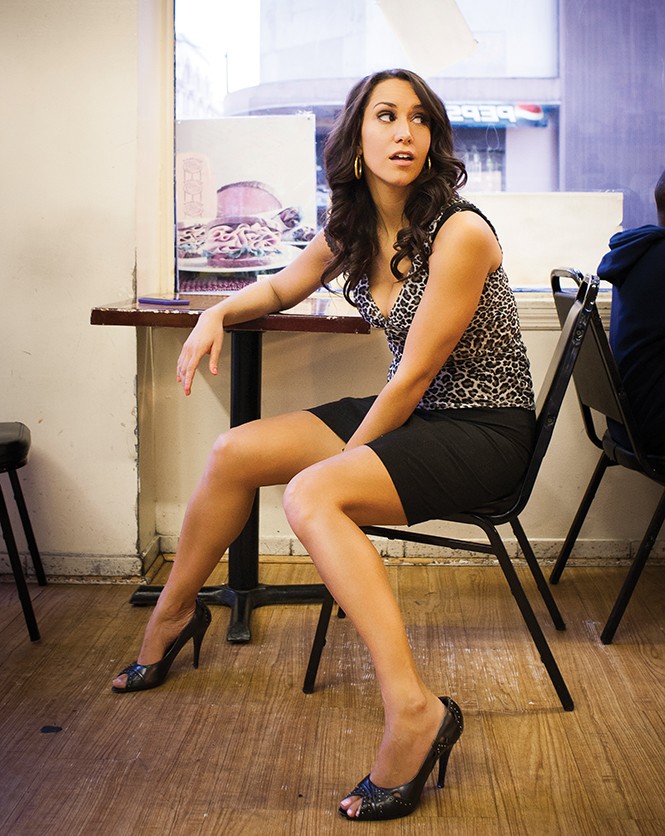 THURSDAY 1.12
Rachel Feinstein
There's plenty of competition in comedy realms these days, so it takes a special ability to not only survive, but also thrive. So credit Rachel Feinstein with a stand-up career that includes three specials on Comedy Central (the most recent being 2016's Only Whores Wear Purple), appearances on HBO and The View, voice-over work for the phenomenally successful Grand Theft Auto video games and the major motion picture Her Composition, in which she played herself.

"I just tell stories from my own life," Feinstein says of her performances. "I talk a lot about my personal life and my family. People and relationships, and uniquely humiliating situations throughout my day."

Being the daughter of a mother who was a social worker and a father who worked as a civil rights lawyer by day and a blues musician by night also provides Feinstein with ample material. Her topics vary—men and sex (separately and in tandem), everyday absurdities and life's inexplicable insanity. "There is plenty to mock in myself," she admits. "My life is weird, and I have weird interactions and wild failures."

Feinstein shares those narratives in an ever-shifting array of characters and dialects, with no subject taboo and no target unscathed. "I like peoples' voices and word choices and affectations, so I notice those things and talk about them on stage," she says. "And pain! Of course, despair is always funny, right?"

A dramatization of a real-life tragedy risks coming off as exploitative; a journalistic series of talking-head interviews with the principal players risks feeling musty and tedious. Director Keith Maitland came up with the radical notion of combining the two in a documentary with an uncommon sense of urgency, considering it's depicting an event that occurred 50 years ago.

The subject of Tower is the mass shooting that took place at the University of Texas on Aug. 1, 1966, when Charles Whitman took up a position in the university's iconic clock tower and begin firing at people below. Maitland's approach captures events almost in real time, using actors to re-create the experience of those involved in the incident while the actual survivors narrate in their own words. Those scenes are presented with an overlay of rotoscope-style animation, providing a surreal filter that actually makes those scenes feel more real. The stories that unfold offer lump-in-the-throat examples of heroism, both by civilians and—so welcome in an era when we hear so much about the worst examples—police officers. And in a particularly satisfying choice, Maitland never once attempts to bring in the point-of-view of Whitman himself, ensuring that this is a story about those whose lives he changed forever.

Maitland visits Salt Lake City this week to host a Q&A after the Utah Film Center's screening of this unique film. Get a chance to learn the behind-the-creation stories that resulted in one of 2016's best documentaries. (Scott Renshaw)

It's not often that a piece of media can effectively blend the vibrancy of a campy, queer musical and the drama of working-class communities dealing with the pressures of modernization. But with its poppy and warm tunes and kookily sincere plot, Kinky Boots brings the best of both to present a musical in a class of its own.

Based loosely on true events and the 2005 film of the same name, Kinky Boots centers on Charlie Price and his partnership with a drag queen and cabaret performer named Lola. Motivated by a desire to save the family business and a longing for acceptance, they work to shift production from men's dress shoes to produce custom footwear for drag queens. Propelled by the poppy, energetic music and lyrics by '80s pop star Cindy Lauper, the play shows them finding ways to re-energize their communities and push for a greater culture of tolerance.

Bruce Granath—vice president of marketing for Magicspace Entertainment, the local group responsible for Broadway productions in Utah—says Kinky Boots' success on the New York and international stages made it impossible not to include in the Eccles' inaugural season. "Kinky Boots will bring heart, humor and sparkle to the series and everyone who sees it," he says.

The captioned performance is on Jan. 21 at 2 p.m., and those interested should select seats on the Orchestra Right section of the main floor. (Kylee Ehmann)

WEDNESDAY 1.18
Ta-Nehisi Coates
Author Ta-Nahesi Coates is a sought-after speaker, well known for his incisive and insightful observations on the cultural issues in modern America, most specifically from the perspective of an African-American male. Born and raised in Baltimore, Coates developed a perspective that combines the day-to-day realities of urban life with the nuanced understanding that can come from higher education.

But, in fact, he didn't graduate from college; after studying at Howard University, he honed his journalistic skills on the job. After stints at Washington City Paper, Philadelphia Weekly, The Village Voice and Time, he landed a blog column for The Atlantic. He also writes as a guest columnist for The New York Times, The Washington Post, Washington Monthly and others.

Coates has a keen ability to distill complex concepts and ideas down to succinct phrases; in a 2012 essay titled "Fear of a Black President," he defined racism as "broad sympathy toward some and broader skepticism toward others." He also does not shy away from controversy when making his points; in his second book, 2015's Between the World and Me, Coates wrote, "To yell 'black-on-black crime' is to shoot a man and then shame him for bleeding."

Coates also authored 2008's The Beautiful Struggle and writes for the Marvel Comics series Black Panther. Today, he is a journalist-in-residence at Massachusetts Institute of Technology. (Bill Kopp)