The King's English Bookshop Virtual Author Events
Books were a lifeline for many during the most housebound days of the pandemic, and continue to be provide enlightenment and escape for everyone dealing with These Uncertain Times™. While The King's English Bookshop is still refraining from holding in-person author events, virtual "book tours" offer a chance to learn more about new offerings in both non-fiction and fiction.

On Thursday, July 9 at 6 p.m., author Stephanie Gorton discusses her new book Citizen Reporters: S.S. McClure, Ida Tarbell and the Magazine That Rewrote America. In conversation with Los Angeles Times correspondent Rone Tempest, Gorton talks about the rise and fall of McClure's magazine, the influential Gilded Age publication that took on the great monopolies of the early 20th century like Standard Oil—inspiring President Teddy Roosevelt's creation of the term "muckrakers"—even as it introduced American readers to fiction by authors like Sir Arthur Conan Doyle and Willa Cather. Register online at KingsEnglish.com to join exploring this fascinating profile of investigative journalists who changed an era.

On Friday, July 10 at 6 p.m., debut novelist Kimi Eisele presents The Lightest Object in the Universe, a unique tale that melds post-apocalyptic drama with epic romance. In a world where a devastating economic collapse has led to the complete disintegration of the electrical grid, Carson attempts to make his way across the country to find Beatrix, the woman he loves. The narrative follows both Carson's journey, as he encounters a changed and frightened America, and the attempt at a new kind of community Beatrix becomes part of, rising from the ashes of chaos. (Scott Renshaw) 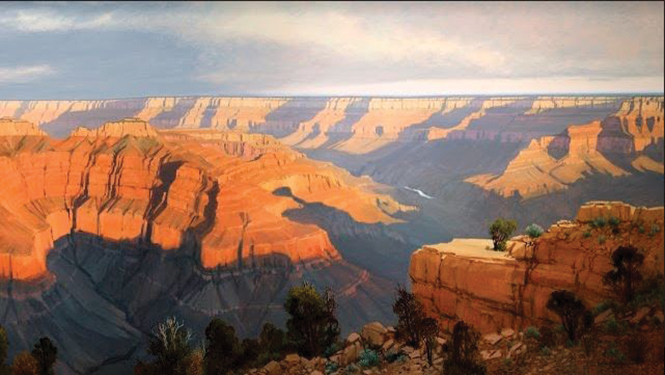 Southern Utah Museum of Art: Find the Distance: A Jimmie F. Jones Retrospective
During the pandemic, many people turned to nature as a place of solace and as a way to feel less confined. The natural beauty of Utah has inspired people for generations, including artists who fell in love with its landscapes. This summer, opening July 13, the Southern Utah Museum of Art (13 S. 300 West, Cedar City, suu.edu/suma) presents a retrospective of artist Jimmie F. Jones', showcasing work from both the museum's permanent collection and pieces loaned by private collectors.

The exhibition spans the entire breadth of Jones' life, going back as far as works on paper from his school days. The chronological presentation tracks through his Mexico period of the 1960s and 1970s, and into his subsequent focus on landscapes, most specifically those of Southern Utah and Northern Arizona (2009's "Point Sublime" is pictured), allowing for a comprehensive study of his artistic development. "Jimmie Jones literally grew up in the national parks of southern Utah and northern Arizona, but not until he started painting them in 1976 did he grow into a deep intimacy with the canyons and the plateaus of his native region," Jim Aton writes in his biography The Art and Life of Jimmie Jones: Landscape Artist of the Canyon Country. "His body of work stands as a testament to his profound love for his home landscape."

While the physical gallery is now open to the public, special programs are available in a virtual space, and there are special hours for at-risk groups 10 a.m.-11 a.m. Monday through Saturday. Contact the museum of any other questions about safety measures and policies. (SR)

Thanksgiving Point Outdoor Movie Series
While summer is typically associated with blockbuster movie season, 2020 has seen major new releases postponed while theaters only gradually begin the process of reopening. Some folks have gotten their fix through drive-in movies, but while pleasant weather allows, there's still the relatively safe option of enjoying movies under the stars in the fresh mountain air.

Tickets are $10 per person, or free to Thanksgiving Point members. The 50,000 square foot grass seating area for the screenings—bring your own blankets—allows for plenty of social distancing between families. While Thanksgiving Point does not require masks at all times, visitors are encouraged to do so, especially while entering and exiting the grounds. Visit thanksgivingpoint.org for additional information about the venue's safety measures, and get ready to experience the escapism of summer movies again. (SR)

Bengt Washburn
Over the course of a comedy career spanning more than 20 years, Bengt Washburn has had plenty of fun at the expense of his Latter-day Saint heritage. On stage, he has described the rules for being a good Mormon as including "no drinking, no smoking, no premarital sex and, of course, the most logical one: No coffee. Because think about it: No drinking, no smoking, no sex ... why stay awake? Why even bother getting out of bed, really?" And more generally: "One person doing something crazy, that's a nut. A bunch of people doing something crazy, that's a religion."

Those who have seen Washburn perform locally during previous visits—including his headline sets during the 2013 Utah Arts Festival—will know that his off-kilter sensibility is wonderfully self-deprecating, often focusing on his own relationships and his failure as an ideal physical specimen. In recent years, he's turned his comedic attention to the effects on his life of being married to an Air Force officer, requiring relocations around the world and immersion in foreign languages—or at least, attempts at immersion in foreign languages. "You're not immersed in people speaking German," he notes; "you're immersed in people speaking English with a German accent. So no progress with my German, but amazing progress with my German accent. I am not bilingual, but I can sound bilingual."