THURSDAY 7/19
SALT Contemporary Dance: Pan
SALT Contemporary Dance has carved out a unique local niche with its site-specific dance performances, but one locale from 2017 proved to be so special that they couldn't resist returning. Last summer's production of Pan—an inventive version of the Peter Pan story—comes back for two weekends on the shores of Utah Lake.

"This location was made for this show. It's so magical," says company artistic director Michelle Nielsen. "Everyone came away feeling that Peter Pan magic. It was the combination of being a few feet away from the performers, under the tiki torches, on the beach, with the Lost Boys in the trees, mermaids in the water."

SALT's interpretation of the beloved character combines familiar components from the original text as well as stage and screen interpretations, while adding depth to the character of Peter Pan himself. This narrative explores Peter's origins, including his own parentage, and the events that might have turned him into the little boy who never grew up. "I wanted to create a story that resonates with the magic of childhood," Nielsen says, "but also the reality of our family lives that are all complicated."

Mostly, however, it's a family-friendly opportunity to enjoy a performance on a beach, with an evening breeze, and an optional picnic dinner provided by Mo'Bettah Hawai'ian. Nielsen plans to take what the company learned from last year's show, and give it even more enchantment in this unique setting. "It was created in a studio then performed on the beach," she says. "Now that we've performed on the sand, we've sort of re-created it, to use that location even more." (Scott Renshaw) 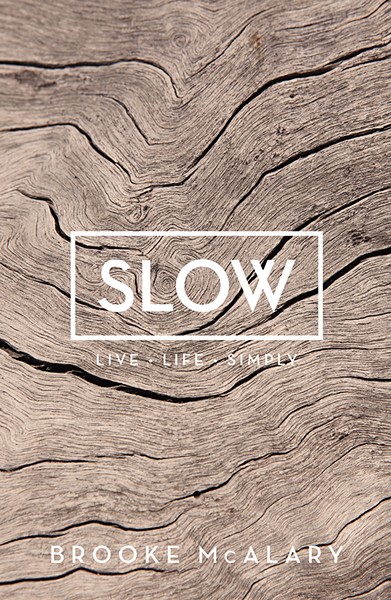 FRIDAY 7/20
Brooke McAlary in Conversation with Courtney Carver: Slow: Simple Living for a Frantic World
If you find that "mindfulness" has become a blasé buzzword and the minimalist lifestyle feels like an unrealistic platitude that fails to move you, then Brooke McAlary's latest book—Slow: Simple Living for a Frantic World—promises to deliver the real-world application you need to bring ease back into your life. McAlary supplements her written works with weekly lessons hosted on her podcast Slow Your Home, where she slings interviews, experiments and kernels of wisdom with her husband and co-host, Ben, to help you reclaim peace through humor and a more gentle pace.

This Sydney native is slowly winding her way through the U.S. this summer, and will find herself in conversation with Salt Lake City-based blogger Courtney Carver at The King's English Bookshop for a discussion about cultivating a personal philosophy of simplicity. "Carver is the blogger behind Be More with Less, a prominent minimalist blog where she writes about the benefits of decluttering and living simply," explains event marketing specialist for the Slow book tour Lizzie Lewandowski. "The common themes of their writing make Brooke and Courtney natural conversation partners. Folks attending the event can expect a warm, honest discussion of their minimalist lifestyles, the benefits and beauty of living purposefully and simple ways we can all enjoy those same benefits."

The Slow life is a day-by-day exploration of the balance between flexibility and perfection. Simplicity comes from well-placed priorities. You don't have to do everything to live a life of meaning—so slow down, stop the struggle and let yourself wobble a little. (Samantha Herzog)

SATURDAY 7/21
Niki de Saint Phalle: Freedom Would Be Mine
What does a woman's rage and joy look like when depicted by a female artist? What does political art look like when in the hands of a woman breaking away from social norms? Kimball Art Center's newest exhibit explores these questions and more through the work of the late French-American sculptor, painter and filmmaker Niki de Saint Phalle.

Saint Phalle catapulted her way into the art world in the 1960s with her "Shooting Paintings," paint-filled assemblages she shot with paint that made them "bleed." These marked the beginning of a long, intensely political career that explored feminism, anti-war activism, AIDS awareness and more.

Nancy Stoaks, curator for Kimball Art Center, says though Saint Phalle was prolific and one of the foremost artists of the 20th century, her work was and still is overlooked because of her gender. Her work, Stoaks says, took women's roles, their bodies, and their place in society seriously, ideas that still feel revolutionary today."Niki's rebellious work demonstrates how art can promote dialogue, questioning and change," Stoaks says.

If people are familiar with Saint Phalle's work at all, they probably think of herNanas, a French slang term that roughly translates to "babe." These large, vibrantly-colored sculptures depict the female form in a lively, voluptuous and loving way ("Jaune" is pictured). While it will have oneNanaon display, Stoaks says the exhibit will feature a variety of assemblages and paintings, from the beginnings of her career to works from the 1990s. (Kylee Ehmann)

TUESDAY 7/24
Native American Celebration in the Park Powwow & Festival
Despite the fractions and fissures that have divided the nation of late, the U.S. is still a land that basks in diversity, with individuals of all races and ethnicities playing a part in what makes this nation great.

Yet, at the core of it all, there are the First Nations who occupied this land long before settlers and explorers made their way west. Often displaced, their culture under siege, Native Americans seek to remind others of their rich identity, which continues to flourish even today. It's appropriate, then, that the annual event known as the NACIP Powwow & Festival continues to serve as a reminder of the remarkable heritage America's original residents—and those of Utah in particular—bring to this state, even as it celebrates Pioneer Day.

In retrospect, the importance of asserting that identity can't be overstated. Hollywood often portrayed Native Americans as bloodthirsty savages, whose only intent was to exact revenge on unwelcome intruders and murder the innocent. It's important, then, to learn about their contributions to this country and how their legacy adds to the rich fabric of this nation, and our state.

This year's NACIP celebration, its 24th annual intertribal gathering, offers an array of events for visitors of all ages. Music, storytelling and native dancers representing tribes from throughout the country will provide entertainment, with arts and crafts, interactive exhibits and food booths. A fireworks exhibition will take place at 10 p.m., capping a day of shared fun and festivities. (Lee Zimmerman)