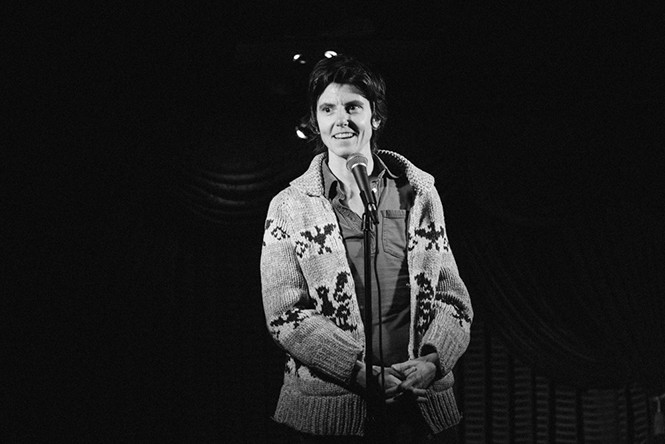 THURSDAY 6/21
Liberty, Laughs and Libations
What do you get when you combine a fundraiser for a local health organization, adult beverages and laugh-out-loud comedy, all in the month of June? Liberty, Laughs and Libations, where Planned Parenthood serves up an evening of signature cocktails, beer and cider, with jokes delivered by Emmy- and Grammy-nominated actor/comedian Tig Notaro.

"This is a new kind of event for us; we've never done something this big, or brought in a well-known name like Tig Notaro before," says Katrina Barker, communications and marketing coordinator for the Planned Parenthood Association of Utah.

An as-yet-unannounced musical act joins Notaro for the main event, with both performances included in the $50 ticket. An additional $25 gets you access to that aforementioned alcohol, in addition to desserts and live music by Pixie and the Partygrass Boys at a pre-show reception.

"It's going to be a fun party, so I recommend coming to the reception," Barker says, specifying that the event is perfect for "anyone who wants to laugh, have a good time and support Planned Parenthood."

On a more serious note, Barker explains, "All the money raised from this event will go directly to helping Planned Parenthood do political advocacy work here in Utah." Which is work, she says, "we can't do alone. We hope Utahns will come together for this fun night of laughs and libations to celebrate the important work Planned Parenthood does in Utah to help us all live our best lives." (Casey Koldewyn)

THURSDAY 6/21
Cirque Italia Water Circus
If you've seen one circus, haven't you seen them all? Not necessarily—and no matter how many you've seen, they never fail to dazzle and delight. Cirque Italia is no exception, and with their latest presentation, Water Circus, they've emerged as one of the most stunning circus spectaculars yet. Offering incredible pyrotechnics, aerial acrobatics, creative choreography, clowns, contortionists, jugglers, skaters, lasers and even delightful dinosaurs—but no captive animals—it's performed on a stage with a giant tank filled with 35,000 gallons of water. Featuring 30 talented international performers, it's one of two aquatic-themed productions the company brings annually to some 50 cities in the U.S. alone, entertaining nearly two million people along the way.

Founded in 2012 by Manuel Rebecchi, an Italian entrepreneur descended from a family of circus performers, Cirque Italia touts its transformative technology and what the promoters promise is high-end entertainment. The two-hour spectacle showcases performers from the United States, South America and Europe, in a Vegas-style show dropped right into Utah.

"Cirque Italia is such a unique experience," says Morgaine Rosenthal, a high-wire performer and operations assistant. "The wide variety of acts from all over the world, all under our beautiful blue-and-white big top and performing on our amazing water stage, creates a mesmerizing universe for each and every audience member. It's a magical setting that the whole family will enjoy." So take some time to feel like a kid again. (Lee Zimmerman)

FRIDAY 6/22
The Sklar Brothers
Stand-up comedy is hard enough; now imagine having to depend on someone else to share the timing so the jokes don't fall flat. Of course, if you're going to attempt such a thing with an on-stage partner, it helps if you have that "twin thing" going for you.

St. Louis natives Jason and Randy Sklar have spent nearly 25 years building a varied comedic career in which their shared goofiness is greater than the sum of their goofy parts. In acting gigs, they often share appearances, as they have on shows ranging from Grey's Anatomy to It's Always Sunny in Philadelphia to Better Call Saul. They have also woven their love of sports into many of their jobs, including regular guest-host spots on the nationally syndicated Jim Rome Show or their late, lamented ESPN series Cheap Seats, in which they provided Mystery Science Theater 3000-style commentary on vintage sports clips.

But they're still at their finest when sharing a stage, doing stand-up routines that make the most of their back-and-forth, "finish each other's sentences" banter. Their gift for playing off of each other is evident in a YouTube clip from Nerdist's "Set List," in which comics are required to improvise jokes based on topics provided on the spot. A prompt of "New STD Kickstarter" leads into a raucous routine. "The Kardashians are like America's herpes," Randy begins; "we have to lie to Europe about them." "And hope that Europe doesn't get the Kardashians. Because if they did, we'd be like, 'Shit, look at Canada, that wasn't us.'" (Scott Renshaw)

SATURDAY 6/23
WWE Live SummerSlam Heatwave Tour
It's easy to dismiss professional wrestling as low-brow entertainment. The over-the-top costumes, the cartoonish villainy and heroism, the fact that the fights and outcome are choreographed—it all adds up to baffle those unfamiliar with the culture of WWE.

So, what is it that draws thousands upon thousands of WWE fans to see big-budget performances like the WWE Live SummerSlam Heatwave Tour coming to West Valley City's Maverik Center? Well, it's likely the level of performance commitment required to blend reality and fiction inside and outside the ring—a process known in the professional wrestling world as "kayfabe." Or, as the philosopher Roland Barthes once put it, "Wrestling is not a sport, it is a spectacle, and it is no more ignoble to attend a wrestled performance of Suffering than a performance of the sorrows of Arnolphe or Andromaque."

This might be a bit melodramatic. But it does seem to get to the heart of what makes professional wrestling so popular, even when we know it's all an act.

Fans can see some of their favorite rivals battle it out, cheer the heroes and boo the heels in the Heatwave Tour. Featured in this year's performance are a slew of superstars, all from the WWE Raw programming, including former WWE Raw Women's Champion Alexa Bliss, the athletic and occasionally demon-possessed Finn Bálor and the villainous Roman Reigns (pictured). Doors open at6 p.m.and parking is $10 per vehicle. (Kylee Ehmann)