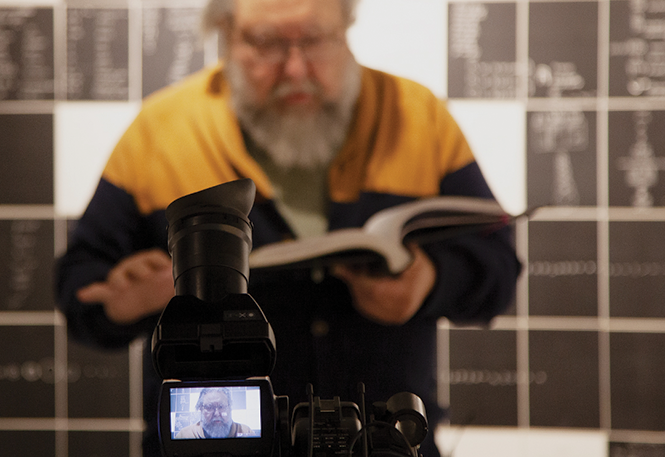 Baggage: Alex Caldiero in Retrospect @ UMOCA
Alex Caldiero ranks among Utah's most distinctive creative minds, with a career spanning 50 years as a writer, performer and multidisciplinary innovator—just don't call him an "artist." Caldiero prefers the term "maker," and a new exhibition at the Utah Museum of Contemporary Art (50 S. West Temple, utahmoca.org) explores the many things and ideas he has made.

Baggage: Alex Caldiero in Retrospect—currently running—digs through Caldiero's archives for a showcase of notebooks, drawings, sculptures, recordings of his live performances and more. The curators state that the exhibition was put together without an attempt to define chronology or any specific progression in Caldiero's career, using custom-made shelves and pedestals similar to those from Caldiero's own studio as a way to convey the range and scope of his work. In an opening event with the curators, Caldiero described the rush he felt from looking at items as they were unpacked: "I hadn't seen some of them in 30 years ... There was an energy, a rush."

In conjunction with the exhibition, UMOCA has published a book with the same title available in the museum's Art Shop. Like the exhibition itself, it's a distillation of what the curators describe as Caldiero's openness "to all policies, and possibilities, willing to flatten those alphabetic symbols into visual forms and abstract them, twist them, turn them upside down, to sample, overdub, and reveal them, destroy them, dematerialize them, and then make them whole." Visit the UMOCA website for a reserved time slot to visit, per the reopening guidelines. (Scott Renshaw) 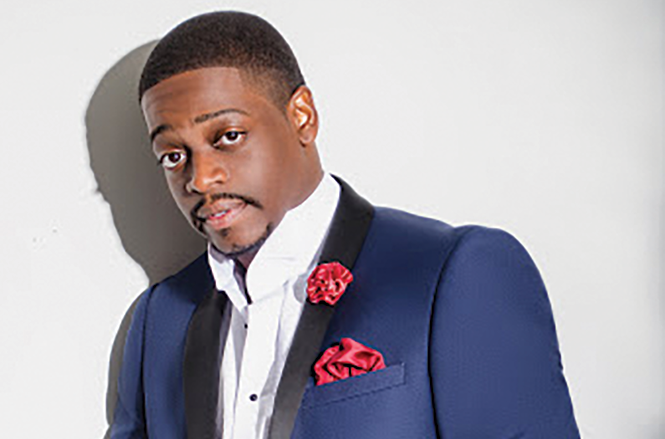 Shuler King @ Wiseguys
While many cities' comedy venues remained closed, plenty of comedians turned to virtual shows or other online ways of staying connected with their audiences. Shuler King put his phone's camera on his dashboard and became a prolific creator of YouTube video updates, commenting on ridiculous things he discovered on the Internet. And it's impossible to keep from laughing out loud when King lays into a guy using a self-serve car wash's power-sprayers to levitate himself into the air—not necessarily because it was dumb, but because "now I got to do it, because it looks fun as hell."

It's not surprising to find that King has an oddball sense of humor, since the South Carolina native proudly touts that when he's not on the road, he works as a licensed funeral director and embalmer at his family funeral business. "My family does not respect my achievements," King said recently while promoting a gig. "I just came back from Japan, I was feeling on top of the world. My dad said, 'You did Japan, huh? ... That's good ... go take the trash out.'" Maybe they did appreciate the viral fame King achieved in 2016, when he responded to the controversy over Melania Trump stealing a speech from Michelle Obama by taking it upon himself to craft a "new" speech for the soon-to-be First Lady.

Catch King at Wiseguys Gateway (194 S. 400 West, wiseguyscomedy.com) for a stop on his Laugh Your Mask Off tour, Thursday, March 11, 7 p.m. Tickets are $20; visit the website to purchase and for safety information. (SR)

The next selection in the month-long series is Ruth – Justice Ginsberg In Her Own Words, profiling the life and work of the groundbreaking attorney, civil-rights advocate and Supreme Court justice. Academy Award-winning director Freida Lee Mock focuses, as the title might suggest, on the public words of Justice Ginsberg, including lectures, interviews, visits with schoolchildren and her brilliant SCOTUS decisions. The live-stream screening takes place Tuesday, March 16 at 7 p.m., followed by a live Q&A with Mock, and a short on-demand viewing window through March 17.

Subsequent virtual screenings include Rebel Hearts (pictured), featured as part of the U.S. Documentary Competition in the 2021 Sundance Film Festival. Director Pedro Kos explores the fascinating story of the Sisters of the Immaculate Heart of Mary, Roman Catholic nuns in a Los Angeles-based convent who challenged Church authorities in the 1960s in the wake of the revolutionary Vatican II council. The screening takes place March 23, 7 p.m., and also features a post-film Q&A with the director. March 24 brings Picture a Scientist, from directors Ian Cheney and Sharon Shattuck, exploring the long history of under-representation of women—and particularly women of color—in STEM occupations.

Visit utahfilmcenter.org for information about additional upcoming screenings, and to register for reserved tickets to these events. (SR)

Southern Utah University virtual theater: The Matchmaker
As Plan-B Theatre Company is already showing with its current season (see City Weekly, Feb. 25), there are creative ways for theater artists to use a strictly auditory approach to storytelling while in-person performances remain limited by the pandemic. The theater department at Southern Utah University takes a page from Plan-B's long history of radio drama by presenting Thornton Wilder's 1954 play The Matchmaker on March 13, 16 and 19 at 7:30 p.m. virtually atgo.suu.edu/virtualtheater, with the March 13 performance airing live on SUU's Thunder 91.1 FM. Pre-registration at least 15 minutes before showtimes is recommended.

The narrative follows Dolly Levi, a widow who brokers marriages in turn-of-the-20th-century Yonkers, New York. Among her clients is local merchant Horace Vandergelder, who has contracted Dolly to find him a wife, except that Dolly has the idea that she herself would make the perfect match for him. What follows is a slapstick tale full of mistaken identities and other farcical situations.

According to the production's director, Richard Bugg, "In the great storytelling tradition of old-time radio, we are presenting this classic farce, which normally relies on a lot of visual humor. The listener's imagination, if triggered with the right aural clues, will create even more imaginative, engaging, and hilarious visuals in the mind." And cast member Savannah Selbach adds, "I have learned a lot about myself as an actor while working on this show. I am a very physical actor, and tend to rely on my face and body to do the work for me, so it is nice to push myself as a voice actor." (SR)