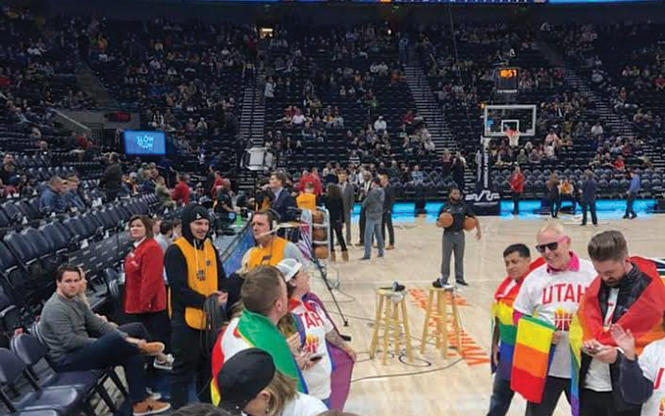 FRIDAY 3/13
Pride Night with Utah Jazz
The Utah Jazz are unfurling their Pride colors. On March 13, fans have a chance to support the local team even as the organization gives a shout-out to local organizations that support the state's LGBTQ citizens. Anyone who gets tired of supporting the Jazz by wearing only official team colors can come sporting a whole lot more—the closer to the whole spectrum of the rainbow, the better. It ought to make for great shots of the spectators in the arena.

This year's event is the second such collaboration between the team and Utah's LGBTQ+ community. "The Utah Pride Group Night with the Utah Jazz was born from the Utah Jazz reaching out to us back in 2019 with an idea of us joining them in partnership for one of their group nights," says Utah Pride Center marketing and media coordinator, Brim Custen. "The goal, overall, was visibility and highlighting how diversity exists in all communities." This year, among the organizations recognized will be the Utah Pride Center, Stonewall Sports and the Utah LGBTQ Chamber of Commerce.

Having rainbows prominently on display at an NBA game wasn't always possible in the past, but the change is pretty cool. This year, fans who purchased tickets before March 1 could commemorate the occasion with a cool T-shirt featuring the Jazz logo in Pride colors.

Come with flags, scarves and shirts ... all of it. You should eave flag sticks at home, per arena rules, but the flags will be on big display, and the more in the audience, the merrier. (Casey Koldewyn) 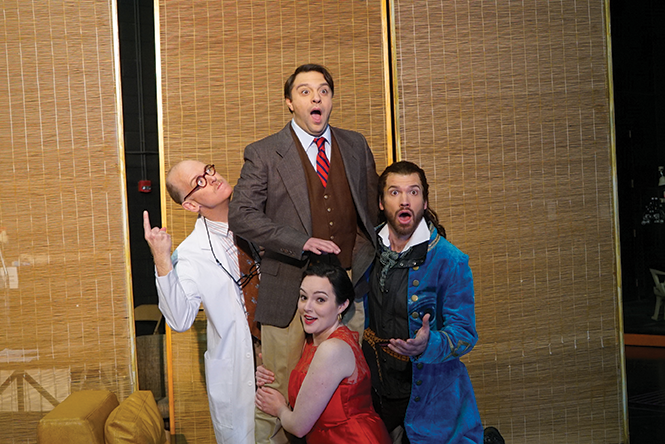 SATURDAY 3/14
Utah Opera: The Barber of Seville
The classics can be intimidating. Opera, ballet and symphony can seem to exist in a rarified world—highbrow entertainment that struggles to find wider appeal among the masses. Happily, Utah Opera has effectively countered that impression by offering productions that find a common connection through enlightenment, entertainment and an emphasis on a common humanity. That's been the company's mission for more than 40 years of both contemporary works and revered pieces boasting timeless appeal.

Gioachino Rossini's opera, The Barber of Seville, falls within the latter category. The tale of a barber (natch) named Figaro who's recruited by a wealthy count to help win the favors of the elusive heroine Rosina, it recounts an unlikely comedic courtship. It's a funny story that has universal appeal, one guaranteed to entice both dedicated opera lovers, as well as novices drawn to its hilarious premise. This plot line, after all, has sustained its humor and enticed its audiences for well over 300 years.

In a twist, however, Utah Opera reimagines the story by setting it in 1980sSpain. "It's Rossini as if it were a Pedro Almodóvar movie," Utah Opera stage director Jimmy Marcheso says via email. "It's a great jumping-off point for the irreverence of the piece ... We play the music of Rossini the way Almodóvar is able to play with time, melodrama, romance, camp and surrealism." And for this barber, there's no trim needed. (Lee Zimmerman)

SATURDAY 3/14
SLC St. Patrick's Day Parade and Siamsa
Time to dust off the emerald attire and hit the streets of Salt Lake City for a chance to spot a leprechaun at the 42nd annual St. Patrick's Day Parade and Siamsa celebration. Founded by the Hibernian Society of Utah, this popular occasion—held rain or shine—commemorates Irish history, culture and traditions. The procession includes community members, colorful floats and numerous bands.

"My favorite part of the parade is the energy," says Hibernian Society president Meghan Welsh-Gibson. "It could be snowing or raining sideways, but every year people show up in their best green attire with a smile on their face and a song in their heart, helping us bring the spirit of the Irish to Salt Lake City."

Welsh-Gibson—whose father John Welsh was a parade originator—notes that the event planning process began in September with a committee of eight "daring souls," all compelled to share their culture. "No matter the amount of stress and sleepless nights, the love and pride of our heritage is what drives us to continue this every year," Welsh-Gibson says. "And for me to carry on my father's legacy is a gift in itself."

The cavalcade starts at 200 South and 500 East, proceeds west on 200 South, and concludes at State Street. Immediately following is Siamsa (Sheem-suh)—Irish for "celebration"—at the Gallivan Center. Vendors will offer themed merchandise, food and beverages and activities for all ages, according to Welsh-Gibson—including authentic folk music for dancing a jig or two. (Colette A. Finney) 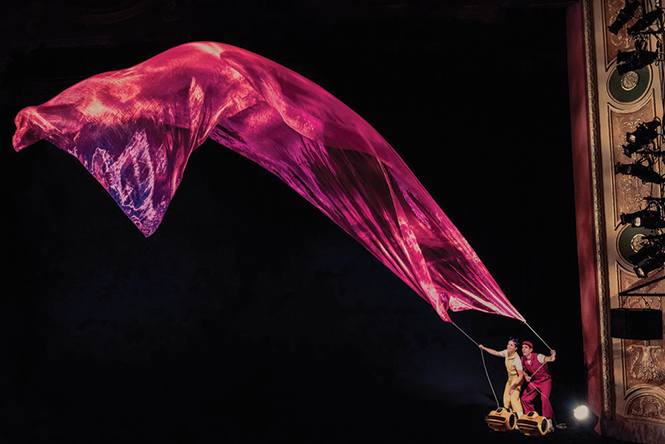 SATURDAY 3/14
Air Play
Since 2005, Acrobuffos have been making magic out thin air across seven shows, international circus festivals and 25 countries. If you asked Seth Bloom and Christina Gelsone about Acrobuffos's origin story, it would seem like something right out of an international romantic comedy. As stated on their website, "Bloom and Gelsone originally met at a circus in Afghanistan, became engaged while street performing in Scotland, married in China, and occasionally go home to New York City."

Air Play, Acrobuffos's most recent work, uses everyday objects such as umbrellas, balloons, and fabrics in order to create a stunning visual presentation that satisfies audiences of all ages. Touring the world since 2015, Air Play has been seen by more than 150,000 people in five continents across the globe.

The brainchild of kinetic sculptor Daniel Wurtzel and Acrobuffos, Air Play is an interactive poem that uses visual comedy, kinetic sculpture and circus antics to transform ordinary objects into ethereal beauty. The Sydney Morning Herald described the production as "a joy from start to finish, Air Play will entrance children, and will act as a great reset button for stressed adults."

At its heart, Air Play is a tribute to the beauty that is experimentation, simple movement and technology. "Air Play is a love letter to our childhood, our sisters and brother and we hope audiences connect to this story in their own lives," Bloom says. "We've brought Air Play ... around the world, it's truly a universal show. We hope Utah audiences laugh and are touched by the beauty in the show." (Ashley Stenger)