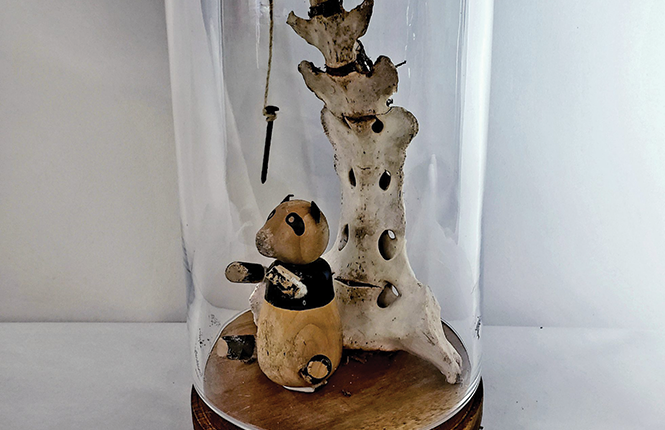 Chauncey Secrist / Nate Francis @ Finch Lane Gallery
It's hard to overstate the psychological impact of feeling like you don't belong. A sense of other-ness creeps into every aspect of your identity, especially when that other-ness is wrapped up in the moral judgment of the insiders. Two new exhibitions currently running at Finch Lane Gallery (54 Finch Lane, saltlakearts.org) explore that sense of being an outsider through two distinctive lenses.

In (un)Holy Relics, Chauncey Secrist's sculptural artifacts reveal the impact of growing up as a religious minority. The artist grew up in Sandy, Utah, raised in a largely atheist/agnostic family surrounded by Latter-day Saints neighbors. "Throughout my youth, I was excluded from the Boy Scouts, was told by other children's parents that their kids couldn't play with me because I was 'a bad influence,'" Secrist says in an artist statement. "What continues to bother me are comments suggesting that I cannot understand sacredness or reverence because I do not believe in a God." Using found materials ("(un)Holy Relic #4" is pictured), Secrist looks at a variety of ways in which something might be considered sacred.

Photographer and sculptural artist Nate Francis, deals with the experience of growing up gay in Utah in their exhibition In Place. "Coming out as queer after living as a member of the Mormon faith and serving a two-year mission ... was a wake-up call for myself, my family, and my friends," writes Francis. Through photo collage of the artist's body and Utah's landscapes, as well as objects found from these landscapes, Francis captures the relationship between identity and surroundings.
Both exhibitions run through April 23. (Scott Renshaw)

University of Utah Guest Writers Series: Mark Wunderlich
Technically speaking, National Poetry Month doesn't begin until April. That doesn't mean you need to wait a couple of weeks to appreciate the power of verse. This week, the University of Utah Guest Writers Series welcomes award-winning poet Mark Wunderlich for a reading and conversation about his work.

A Minnesota native, Wunderlich currently lives in New York and serves on the faculty of Bennington College in Vermont. His first poetry collection, 1999's The Anchorage, garnered the Lambda Literary Award; subsequent collections include 2004's Voluntary Servitude, 2014's The Earth Avails and the upcoming God of Nothingness.

While Wunderlich covers a range of subjects and styles—including a playful look at his own name in God of Nothingness—he notes a particular power in rhyming verse. "I can't think of any other part of writing poems that feels more magical to me than rhyming," Wunderlich tells the University of Arizona Poetry Center. "Rhymes make a poem incatatory, transform it into a kind of spell. The feeling of writing a poem and working into that moment when the poem begins to sing, when the gear of one word locks into the cog of the next, and the whole machine begins to turn—there are few experiences I love more than that, and the hope of inhabiting that state once again is what makes me keep returning to the page and to my desk."

The live, free virtual event takes place Thursday, March 18, 6 p.m. – 7 p.m. Registration is required at english.utah.edu, but for those unable to attend live, events are recorded and offered via the department's YouTube channel (SR)

PBS Utah: The Refugee Experience in Utah
As a territory and a state, Utah was founded on the experience of being a refugee—those fleeing persecution and the fear of violence, seeking a place where they could feel safe. More than 150 years later, what is it like for those who still turn to Utah as a refuge, this time from other cultures and countries, and do they feel welcome here?

PBS Utah, the Nora Eccles Harrison Museum of Art, the Inclusion Center at Utah State University, and the Cache Refugee and Immigrant Connectionpresent an interactive, multimedia presentation on The Refugee Experience in Utah. The conversation will incorporate literature, film and art, and attendees are encouraged to read Thi Bui's 2017 illustrated memoir The Best We Could Do ahead of time. The PBS Utah short documentary Finding Home: Utah's Refugee Story will be shown as part of the event, along with a presentation by artist Mario Uribe on his serigraph Toll Road (to Paradise), which explores the Mexican immigrant experience through road signs installed in Southern California to warn of the possibility of undocumented aliens crossing freeways.

Additional scheduled panelists include: Naja Pham Lockwood, philanthropist and executive producer of the Oscar-nominated Last Days in Vietnam; Peter Frost, LCSW, is the Director of Youth and Family Services for the Refugee and Immigrant Center - Asian Association of Utah; and Chad Pemberton, a Logan-based immigration attorney who currently also serves as the Utah Director for the United Food and Commercial Workers Union, Local 88 based in Phoenix.

Bill Engvall @ Tuacahn
For more than 35 years, Texas native Bill Engvall has built a comedy career based on a down-home, Everyman persona. It made him a perfect fit for the celebrated Blue Collar Comedy Tour with Jeff Foxworthy, Larry the Cable Guy and Ron White, a partnership that reached millions in the early 2000s via live performances, recordings and a documentary feature. His reach subsequently expanded into a short-lived TBS sitcom, and—since it's the law that comedians have one—a podcast, the now-defunct My Two Cents

His most recent comedy special, 2016's Just Sell Him for Parts, found him exploring some of the consequences of getting older, including a hospitalization for a knee replacement. But he has particular fun with one of his higher-profile gigs of the past several years: a stint on Dancing with the Stars in 2013, where he ultimately landed in fourth place. From his initial enthusiasm for his performance—"There's going to be Bill Engvall Dance Studios around the country!"—he's forced to deal with a rehearsal-related groin injury. "I heard a sound come from my crotch that was somewhere between a scream and a tear. ... Fellas, if you've never torn your groin, allow me: Go home tonight, take out your hunting knife, put it in a flame, let it get glowing red-hot, then just jab it in your crotch."

Engvall returns to Utah to play the outdoor amphitheater at Tuacahn (1100 Tuacahn Dr., Ivins, tuacahn.org) on Friday, March 19, at 7:30 p.m. Tickets are available at the Tuacahn website starting at $60, along with information on COVID safety protocols. (SR)