by Scott Renshaw and Enrique Limón

Madazon Can-Can
Clown/Burlesque Performer
"Ain't too much sadder than the tears of a clown," Smokey Robinson professed back in 1967. Still, Can-Can, a staple of stages across the city—from regular gigs at Prohibition to Jason CoZmo's Viva La Diva show—looks ahead.

This week, Can-Can was set to participate in Get You a Babe Who Can #DoBoth, a burlesque-meets-TedX event that got canceled along with the state's first-ever Burlesque Festival. In response to mass event cancellations, we opted to use this space to highlight four local art makers in the community.

For #DoBoth, Can-Can—who collaborated to bring the event to Salt Lake City after meeting co-organizer and fellow performer HoneyTree EvilEye at a national burlesque convention—longed to discuss clowning as a form of connection. Clowns have a historic legacy of being "truth-tellers"—a vital trait when addressing taboo subjects, Can-Can says.

"People do assume that I'm 100% family-friendly as a clown," they say, "but ... it has a bent about human sexuality. Everybody's like, 'We're terrified of clowns.' But we're also terrified of sex. Let's discuss these two things together."

Those familiar with Can-Can's work might have been among the lucky few who attended their one-person show, Genit-Hell Yeah, last fall at SLCC's Black Box Theatre. Starting with a self-birth—and employing miming, burlesque and drag—the interactive staging made good on its promise to "play with everything you knew about gender, sex and being human."

Elaborating on their burlesque side, Can-Can says the greatest hurdle fellow performers face in ever-puritanical Utah is misconceptions regarding the art's titillating nature. "This is also theater," they say. "This is also education; this is also political; this is expression; this is freedom."

Find Can-Can on social media, and while you're at it, order an original art print, personalized poem or custom set of pasties. (Enrique Limón/Scott Renshaw) 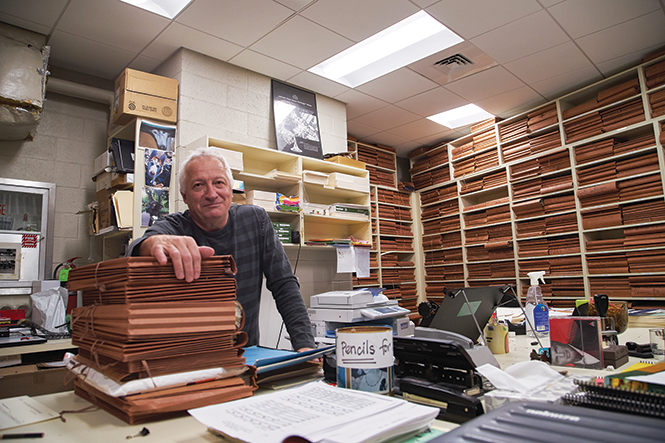 Clovis Lark
Symphony Librarian
Before every Utah Symphony performance, Lark places the score on the conductor's podium. The more fascinating part of his job is the process of determining specifically which score ends up on that podium.

The Midwest native spent time in culinary school and working in restaurants before returning to his interest in music with a job as librarian for the Indiana University Conservatory in 1992. The job involves multiple steps as the symphony plans performances several months down the road. Generally, the artistic director provides the basic program, and Lark begins the process of finding the needed scores for each scheduled piece, with many intermediary steps: Is the composer contemporary enough that the work is still under copyright, requiring payment of royalties? For pieces that are in the public domain, which of the many existing versions is best? If the symphony library does have a copy of a specific piece, is it even the version that the conductor wants to work from?

Once the desired version is obtained, Lark works with the conductor and concertmaster on specific notations for the performance of each part. "Just like a player getting their technique, intonation, everything spot-on," he says, "I'm doing this from the paper end before it even hits the stage."

"I knew somehow in the back of my head, someone had to do the work to get things on stage, but you never knew exactly what it was," he adds. "I discovered there was an area of this job which I cared a great deal about: Making a piece absolutely understandable and correct, which is a critical component of a great performance." (Scott Renshaw)

Kevin Alberts
Costume Designer
A native of suburban Detroit, Alberts—a full-time employee of the University of Utah's costume shop—recalls participating in the drama club in high school, but "I didn't know that being a costume designer was a job. I don't think I knew where costumes came from." It was only when he began working with a community theater that he started learning firsthand. "They needed someone to do costumes, and I went, 'Well, how hard can it be?'" Alberts says. "It was a little harder than I thought."

College study in theater led him to the University of Utah for grad school, where he eventually returned after stints working in Chicago and New York. In addition to working for Pioneer Theatre Co. and other Salt Lake City-based companies, he has designed for the Utah Shakespeare Festival since 2002.

The process of designing a show begins with meetings with a director, but the specifics of that process differ greatly depending on the collaborator, he notes. Every production is unique, with its own unique dynamics—for example, the challenge of keeping your own ideas fresh when you're working on a well-known show where there might have been hundreds of previous productions, or even a movie version.

"People ask, 'What's the hardest show, and what's the biggest show,' and they're not necessarily the same thing," Alberts says. "Les Misérables is probably the biggest thing we've ever done, but ... it's a whole bunch of dirty rags, so you're not overwhelmed by the size of it. Beauty and the Beast was the hardest thing we've ever done, because you have to make somebody be a teapot, and a clock, and a candlestick. It's all stuff we had never done, so the learning curve was tremendous." (Scott Renshaw)

Sarah Shippobotham
Dialect/Accent Coach
If you've attended a theatrical production in the Salt Lake Valley in the past 20 years that included an accent, you've probably heard Shippobotham's work. Since joining the University of Utah drama department in 1998, and subsequently spending more than 15 years as head of the Actor Training Program there, she has worked with actors on the finer points of convincing an audience that they're from somewhere else.

A native of Cardiff, Wales, who studied at the Central School of Speech and Drama, Shippobotham became particularly attuned to variations in regional speech after moving to England at the age of 11, then returning to visit Wales. "I have this vivid memory of going back to Cardiff after we left, and suddenly hearing everybody speaking differently," she says. "My ears just went, 'What?'"

For Shippobotham, teaching an accent begins with learning it herself—attempting to find authentic speakers of that accent, often via online clips, to observe how faces look when they speak and to learn what she calls the "mathematical changes"—variations on pronouncing specific vowels or consonants that might take the word "like" into the Cockney "loik" or Irish "lake."

But as an actor herself, Shippobotham also finds it important to teach not just a formula, but a way to make the accent a natural part of a performance. "The intangible part of dialect coaching is the tune and the rhythm," she says. "It becomes too paint-by-numbers if I say, 'You have to go up here and down here.' ... Does it feel authentic? Does it sound like you spoke like that before you hit the stage? Do you feel free to create in the accent, as opposed to I-have-to-get-it-right?" (Scott Renshaw)