SATURDAY 3/23
Men Are From Mars, Women Are From Venus—Live!
You don't have to be a rocket scientist or astronomer to realize that emotion and motivation at times place men and women in two distinctly different worlds. They don't travel in parallel orbits, either. In fact, the two worlds often collide.

That was the premise of John Gray's best-selling book, which tried to explain the sometimes conflicting psyches of males and females and how they affect relationships. Not surprisingly, those duelling sensibilities made great fodder for an off-Broadway play. A combination of a one-man monologue and not-so-standard stand-up, Men Are From Mars, Women Are From Venus elicits plenty of laughter from audiences that nod knowingly. They easily relate to this revelation on relationships, venting their emotions in the process.

The story is told from the viewpoint of a man (Ryan Drummond, pictured) who initially rejected the book's advice but changed his opinion after meeting its author. He then shares what he's learned through firsthand experience, offering advice of his own in intimate detail.

The play's success capitalizes on the popularity of Gray's book, which remained perched at the top of The New York Times' best-seller list for 121 weeks. The show has been described as "a great recipe for a night out: a little storytelling blended with some comedy and a dash of sage wisdom from the book."

MONDAY 3/25
Jason Alexander with UVU Symphony Orchestra
Whatever else is mentioned as far as Jason Alexander's multifaceted career is concerned, most people will associate him with his Seinfeld alter ego, the explosive yet befuddled George Costanza. As much as any of the other cast members on that iconic sitcom—Kramer, Ellen or even Jerry himself—the Costanza character gave that show its unpredictable appeal. For 10 years, his contributions to this "show about nothing" left an indelible impression; the list of honors and awards Alexander garnered, including Emmy nominations, nods from the Screen Actors Guild and American Comedy Awards, clearly confirm that standing.

Alexander later admitted that the cast voted to end the show in part because prolonging it might have doomed their destinies. "You play an iconic character on a TV series, your career is done," he told the Archive of American Television in a filmed interview. "Continuing it would become a self-defeating prophecy. We would have to contribute to our own eventual demise as actors." 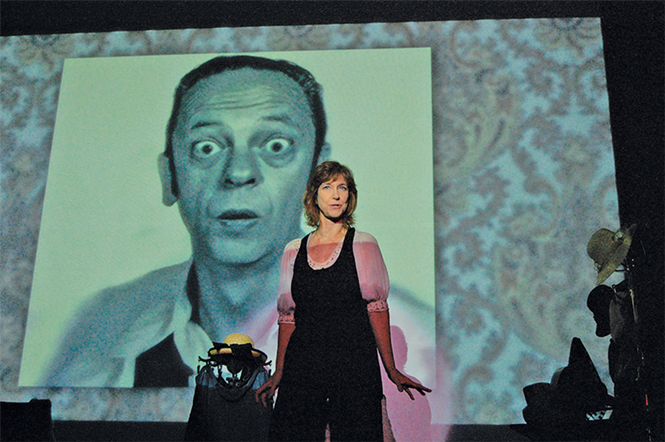 MONDAY 3/25
Karen Knotts: Tied Up in Knotts!
Despite the title's indecent implication, Tied up in Knotts! with comedian Karen Knotts is anything but scandalous. Running in theaters across the United States for more than 10 years, this one-woman comedy show is not only a loving tribute to the work and life of the star's father—actor Don Knotts—but also a family-friendly journey of laughter.

Growing up in Hollywood as the daughter of beloved actor Knotts, who is well-known as a comedian and an actor on The Andy Griffith Show, Karen has a rich vein of history to mine. With a loaded acting résumé that includes regional theater with her dad, roles on television and in movies and a popular stand-up routine, her engaging show has been hailed by L.A. Comedy Awards as the "Funniest One Woman Show."

Billed as "a daughter's tribute to a funny and terrific dad," Karen's show fuses a behind-the-scenes peek of life with her famous father with comedic bits for a show she describes as a "docu-comedy." Karen says, "When my father passed away in February 2006, I wanted to pay tribute to him in the way I knew him best: as an amazing, loving dad ... in Tied Up in Knotts!, I try to capture the essence of Don, the man, because I always thought he was the funniest when he was just being himself." Guests are treated to a live version of this father-daughter love story, with Karen's unique blend of improvisation, music and comedy creating appeal for an audience of all ages. (Colette A. Finney)
Karen Knotts: Tied up in Knotts! @ Covey Center, 425 W. Center St., Provo, 801-852-7007, March 25, 7 p.m., $15-$18, karenknotts.com

TUESDAY 3/26
Ally Condie: The Last Voyage of Poe Blythe
Local author Ally Condie's new young-adult novel, The Last Voyage of Poe Blythe, is an adventure story that goes beyond the confines of the genre by asking its readers to get comfortable with anger, pain and love. The book follows 17-year-old Poe Blythe as she captains a mining ship in search of gold, deals with a traitor in her midst and romance in the air, and struggles for vengeance against those who took everything from her years before.

Condie says that although Poe's desire for revenge powers much of the novel, that's not the only emotion she explores. "I'm interested in rage and revenge because I think the other side of the coin is love and loss. Sometimes the greatest things in our lives hurt so much to lose that we find anger a therapeutic focus," Condie says. "I wanted to explore that. What happens when you suffer inconceivable loss? What does grief look like? How do we keep living with it, and find hope? At its heart, this book is a love story."

Condie reads from the novel and signs copies pre-ordered from The King's English Bookshop. Orders can be placed by either calling the store or ordering online. The reading portion of the event is free and open to the public, sponsored by The King's English and hosted at the Provo City Library. Condie says that she has deep connections with these local literary mainstays, and she feels fortunate to receive their ongoing support for her books. (Kylee Ehmann)
Ally Condie: The Last Voyage of Poe Blythe @ Provo City Library, 550 N. University Ave., Provo, 801-484-9100, March 26, 7 p.m., free, kingsenglish.com