FRIDAY 3/6
Willam
Want to begin this weekend with sparkle, drama, music and pazazz? Catch Willam this week at The Complex for a night of drag, dancing and extreme fun.

Willam Belli—who prefers male pronouns, and has even courted controversy with comments about transgender pronoun use—has been seen acting and dancing, as well as singing, on RuPaul's Drag Race (Season 4), Nip/Tuck and A Star is Born. He is known to be a jack-of-all trades performer, with work that extends into recording music covers.

In addition to the clear love for being on stage, the legendary queen also has some hidden talents—there's a writer under all that makeup and glitter. In 2016, the performer published his first book, Suck Less: Where There's a Willam, There's a Way. The book highlights all of Willam's well-honed strategies to "suck less," both in and out of the drag world. And Willam's fingers extended into the business world, where he created a perfume called "Scented"—one that reportedly smells like "sandalwood and sex"—as well as a popular vlog on YouTube with almost a 1 million subscribers.

Among all of these projects, there's also his gig co-hosting a podcast along with Alaska Tunderfuck, where the two queens bash on each episode of RuPaul's Drag Race (go figure). Willam will appear alongside many other incredible drag performers and artists, including Ellissdee, Izzy Lovely, Anna L'Beads, Flora the Kween, Marrlo Suzzanne, Sarah Prollem and Jag. This event is hosted by Gia Bianca Stephens, with beats by DJ Justin Hollister. Doors open at 9 p.m. (Kara Rhodes)

FRIDAY 3/6
Tumbleweeds Film Festival
It's easy to fall into the trap of believing that kid-friendly filmmaking is the exclusive territory of Disney and whatever CGI animation studios make headway into the multiplex marketplace. There's an entire world of filmed entertainment for children and youth that isn't part of the Hollywood marketing machine—and if a film festival is about anything, it's about expanding that notion of the wide world of cinema beyond releases that have fast-food promotional tie-ins.

The Utah Film Center's annual Tumbleweeds Film Festival takes that notion even farther in 2020 by expanding its programming over two weekends. More than a dozen feature films represent documentary, animation and live-action drama, coming from countries like Kenya, Ethiopia, Germany and The Netherlands, including the 2020 Sundance Film Festival entry Binti. The festival even reaches out to larger potential audiences by presenting films like the Norwegian stop-motion animated Louis and Luca – Mission to the Moon (pictured) once with English-language dubbing, and once with Spanish-language dubbing.

Beyond the films themselves, Tumbleweeds continues to offer young people hands-on experience in how movies are made. Paid, reservation-required workshops introduce topics like makeup, sound effects and writing a music score; the free drop-in clubhouse includes virtual reality experiences, storyboarding and other artistic projects and installations. For any parent or caretaker wanting to give kids an early lesson in the great big world of movies, there's no better place. (Scott Renshaw) 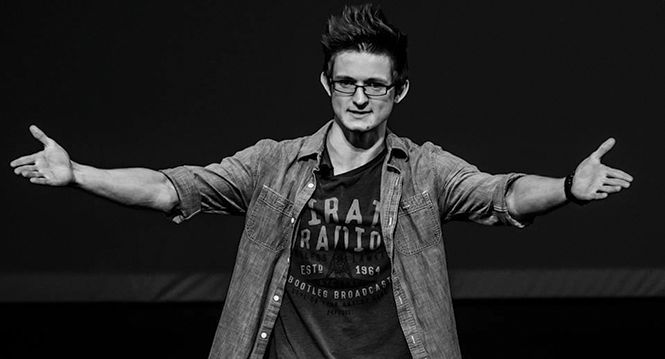 FRIDAY 3/6
Grant Freeman: An R-rated Magic Show
Through 10 years of performing as a comedian and magician, Grant Freeman has created his very own repertoire of debauchery for An R-Rated Magic Show. The self-proclaimed king of comedy magic, Freeman promises a fresh variation on the classical magician stereotype, putting a spin on skills he started acquiring in seventh grade. This is not your average kid-friendly magic show that involves stuffing rabbits into hats and pulling colored handkerchiefs out of wooden boxes. As stated on the event's official website, this will be the show that will have you asking two questions: "How the fuck?" and "What the fuck?"

"The days of magicians wearing top hats and coattails are long gone, but some of the old tricks are still worth doing," Freeman said to the Beaumont Enterprise in 2018. "In my show, I perform some tricks that are everything from 2,000 years old to completely new. But I make sure that each one is fresh, funny and amazing."

Through An R-Rated Magic Show, Freeman has the freedom and the platform to use raunchy tricks, wisecracks and buffoonery to turn a simple childhood dream into an adult reality. Once you sit down, you'll know that this is not your grandpa's magic show.

"I tried to create a show that I would want to see," Freeman said. "I love watching good magic tricks, so I put together the best tricks I could find. I love watching comedy, so I packed the show with as much of it as I could." (Ashley Stenger)

SATURDAY 3/7
Repertory Dance Theatre: Regalia
The combo of dinner and dancing has always been compelling, ever since the first caveman put on his finest loincloth, grabbed his missus, grilled up a mammoth-burger and celebrated with a prehistoric cha-cha.

Nowadays, it's about more than cavorting in a cave, as evidenced by Regalia, Repertory Dance Theatre's annual fundraising extravaganza. The night begins with adult beverages, tasty hors d'oeuvres and an array of auction items, followed by the formal entertainment: performance pieces from five renowned choreographers competing for the chance to create a new work for RDT's upcoming season. Attendees cast votes using bidding paddles, with funds going toward subsidizing the new commission as well as RDT's school outreach program, which impacts 50,000 students and teachers throughout the state.

"Regalia helps us raise awareness and money for the outstanding Arts-In-Education programs that are at the heart of RDT's mission," artistic associate Nicholas Cendese says via email."It's an opportunity to show our patrons the amazing work we do every day in the Utah schools. It's also a way for us to connect andinvest in new and upcoming choreographers, while also engaging our patrons and audience in helping select work they want to see on stage."

Dessert and dancing to the music of the Joe Muscolino Band follows. Roaring '20s garb is suggested, but not required.

"Regalia is a showcase of what makes RDT so great," Cendese adds. "Our mission is to create new work, educate our audience about dance as an art form and build community." (Lee Zimmerman)