The Comedy Get Down Tour, Hidden Figures and NASA, Pioneer Theatre Co.: Twelfth Night and more. 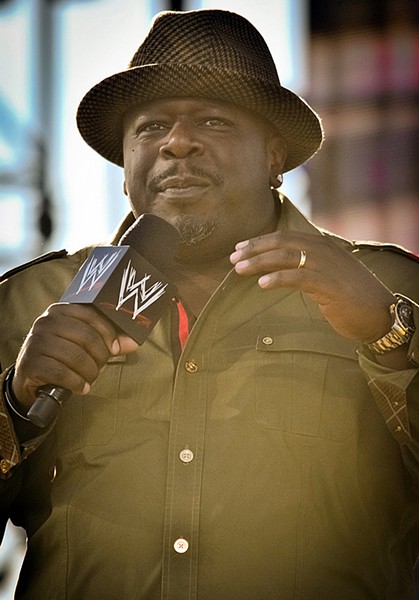 FRIDAY 3/30
The Comedy Get Down Tour
Back in the day, like-minded musicians often put their solo careers on hold in order to hook up with artists of a similar stature. Those so-called "supergroups" were often more about hype than substance, but the combinations often proved intriguing all the same, and were popular with fans.

Today, the supergroup concept is of a comedic kind, as evidenced by The Comedy Get Down tour, a gathering of four famous funny men, any one of whom would be well worth the cost of admission on his own. Cedric the Entertainer, Eddie Griffin, D.L. Hughley and George Lopez are each known individually as supreme masters of mirth with credits that include film, television, sitcoms, standup specials, talk shows, radio programs and best-selling books. Those rich résumés make this a super session similar in its execution to the Original Kings of Comedy tour of the early 2000s, in which Cedric and Hughley played a prominent part. Likewise, Griffin's participation in the Def Comedy Jam readied him for this particular comedy co-op.

It was Lopez, however, who first initiated the idea for this superstar team-up. Desperate to help raise money for a statue of the late Richard Pryor in Pryor's hometown of Peoria, Ill., he enlisted Cedric, Hughley, Griffin and Charlie Murphy for a November 2014 benefit concert they dubbed "A Night for Richard." That collaboration, in turn, led to the tour. "After the first night, we said, 'Hey, we've got to do this again,'" Lopez said in an interview with the Boston Globe in 2016. More than three years on, the laughter still lingers. (Lee Zimmerman)

FRIDAY 3/30
Hidden Figures and NASA: Margot Lee Shetterly and Ellen Stofan
In 2016, many Americans learned for the first time about Mary Jackson, Katherine Johnson and other African-American "computers"—who were a crucial part of figuring the mathematical computations that got American astronauts safely to the moon and back—thanks to the book and Academy Award-nominated film Hidden Figures. But their story had always been in the background of author Margot Lee Shetterly's life; her own father worked as an atmospheric research scientist for NASA, and knew Jackson and Johnson socially. It was only after Shetterly's husband wondered why he'd never heard about these women that Shetterly realized it was a story she needed to tell.

Shetterly (pictured) visits the University of Utah this week as part of the keynote presentation for the MUSE [My "U" Signature Experience] project, joined by Ellen Stofan. Stofan worked as Chief Scientist for NASA from 2013 to 2017, advising, and previously held a senior position at NASA's Jet Propulsion laboratory. Perhaps just as significantly, Stofan has been a vocal advocate for getting people of color and women involved in science and technology careers.

Together, Shetterly and Stofan present an opportunity to re-examine the assumption that a scientist means a white guy in a white lab coat. At a moment when we're grappling with the way institutional structures have held women back in certain professions, it's important to get a reminder that we need to encourage talent and enthusiasm in STEM careers wherever we find it. (Scott Renshaw)

SATURDAY 3/31
Pioneer Theatre Co.: Twelfth Night
Most of us who grew up in American public schools have had exposure to Shakespeare plays, so it's still surprising that they can seem so intimidating to so many people. And despite a comedy like Pioneer Theatre Co.'s production of Twelfth Night being lighter than the celebrated Shakespearean tragedies, cast member Kelsey Rainwater—who plays the role of Olivia—believes the comedies can be even more challenging to present to a modern audience.

"Shakespeare wrote for his time, and everyone would understand the jokes and the insults," Rainwater says. "Where we expect a laugh, we might not get one. ... We have to really stress antithesis; a change in tone will help a line land. There are so many moments when you need to help the audience, with even a shift in body language."

While the language has certainly changed since late-16th-century England, other more recent cultural changes involving gender identity and gender roles also affect the way an audience might encounter a play like Twelfth Night, which involves the character of Viola disguising herself as a man, and people falling in love with people who are not the gender they appear to be. "In Shakespeare's time, all the actors were men anyway, so there was a fluidity," Rainwater says. "A contemporary audience is going to see this differently. It's something we as a culture are wrestling with, so plays that pose that question—what happens when somebody feels they're playing a different role than society wants them to play—can lead to interesting questions, and important ones." (SR)

TUESDAY 4/3
Riverdance
Yeah, I know. There's something aboutRiverdancethat has mesmerized the world for more than two decades. Is it the ornate and glittering costumes donned by dozens of dancers? Is it the melodic mix of fiddle, flute and drum? Or is the percussive power the dancers command with every step? With the 20th anniversary world tour of the production visiting Utah, audiences have a chance to judge for themselves why Riverdance still fills venues worldwide.

Rooted in the traditional Irish music and dance,the spectaclefirst premiered during a seven-minute song-and-dance interval during the 1994 Eurovision Song Contest, an annual, international European-based singing competition. Famous for modernizing centuries-old dance, the show became a breakout success, performing in front of Charles, Prince of Waleswithin nine monthsof its first appearance. And it's continued to dazzle people ever since.

The anniversary show is broken up in two sections, each focusing on two eras of Irish history. The first act deals with Ireland's mythic past, reveling in elemental forces, and celebrating and mourning ancient warriors. Act Two moves away from the fabled ancient past to more recent history, touching on the forces of war, famine and systematic oppression that caused the Irish diaspora. For all of the latter's focus on hardship and struggle, the show ultimately ends on hope, as it celebrates the blending of new and old customs in new countries, and the powerful lull of home. For the backstory of each of the show's segments, visit riverdance.com. (Kylee Ehmann)