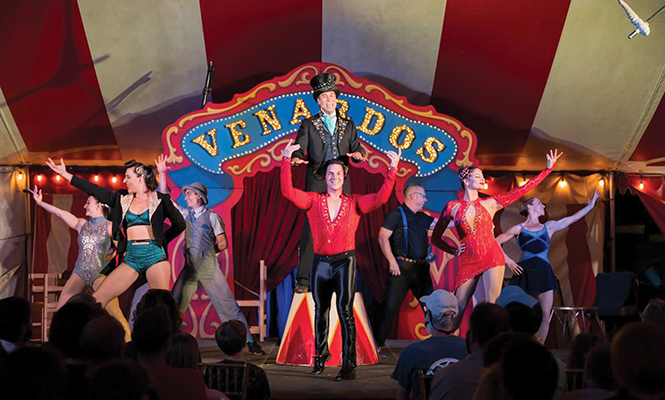 Venardos Circus
The designation of "circus" has grown complicated in recent years, as guests recognized the problematic nature of captive animals being used as entertainment. But there are many different ways to think about what a circus can be, and Kevin Venardos—himself a former Ringling Bros. ringmaster, beginning at the age of just 22 years old—contemplated a different paradigm circa 2014. He wanted to reimagine the circus as the kind of spectacular seen on the Broadway stage, based on the dazzling work of human performers, with no animals.

The result is Venardos Circus, which takes its 90' x 60' big top around the country with a 90-minute showcase of acrobatics, juggling, feats of strength, fire-breathers and, of course, old-fashioned face-painted clowns. Plus, there's a dash of the musical theater background that Venardos brings from his studies at Ithaca College years ago. "I'm building something out of just a dream and an idea," Venardos said to NPR's Scott Simon. "But I believe in it with all my heart, and I know that with time it will continue to grow." Is this the kind of circus a kid could run off and join, Simon asked; "I am absolutely counting on it," Venardos replied. 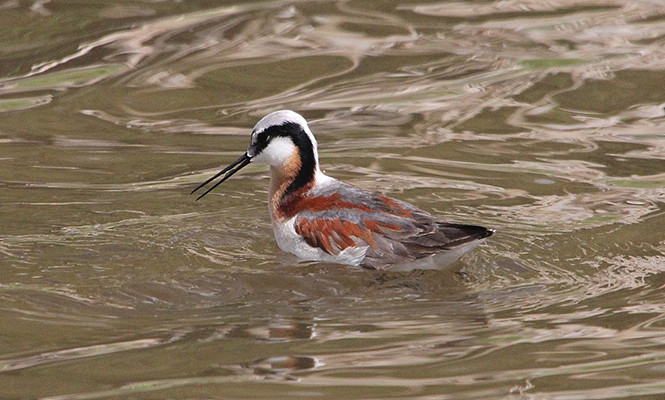 Great Salt Lake Bird Festival / Tracy Aviary Urban Bird Festival
At certain times of the year, Utah's Great Salt Lake is on the migratory path for millions of birds. An annual festival sponsored by Davis County brings attention to the importance of the lake in the avian ecosystem, while a coinciding event at Tracy Aviary showcases the flying friends that they have available for people to visit year-round.

This year's Great Salt Lake Bird Festival presents a four-day program of events May 12-15 including 40 field trips to a wide range of locations including Willard Bay, Antelope Island, Swaner Preserve, Snowbird, Utah County and the Bear River Migratory Bird Refuge. Each event—highlighted at daviscountyutah.gov/greatsaltlakebirdfest—requires advance reservation, and includes information about the accessibility/activity level for the event, ticket prices and more, including items that attendees are encouraged to bring like water bottles, binoculars, sunscreen and bug repellent. Additionally, experts in the field will present workshops on a variety of species, including this year's focus, the Wilson's phalarope (pictured), plus Bird Sketching 101, Introduction to Bird Photography and Learning Shorebirds.

Meanwhile, Tracy Aviary (589 E. 1300 South) celebrates World Migratory Bird Day on Saturday, May 14 with a schedule of events also including Sunday, May 15. Bird care staff will present talks on species including trumpeter swans, raptors and owls, plus a "What's Blooming" tour of plants and their bird friends. All events are included with aviary admission; visit tracyaviary.org for ticket pricing and additional event information. (SR)

Pioneer Theatre Company:Hello, Dolly!
The premise of the beloved 1964 musical Hello, Dolly!—with its songs by the legendary composer Jerry Herman (Mame, La Cage Aux Folles), and its star-making lead role for Carol Channing—takes viewers back to another time and another place. But for Pioneer Theatre Company's season-closing production, they're having a little fun to anchor it in our particular time and place.

The show itself, based on a Thornton Wilder play, takes us to turn-of-the-20th-century New York, where widowed Dolly Levi (Paige Davis, pictured, the accomplished Broadway actor also well-known to locals for her long tenure as spokesperson in R.C. Willey TV spots) turns her skills as a matchmaker to wealthy Horace Vandergelder, with designs on possibly insinuating herself into the role of future Mrs. Vandergelder. Vandergelder's two working-class clerks, Cornelius and Barnaby, have their own romantic plans, all of which gets folded into plenty of farcical comedy and great songs, including the hit title tune.

PTC adds its own touch with a little "stunt" casting for the small Act 2 role of The Judge, which will be played by a rotating cast of SLC notables. Individual weeks of the show's run will feature City Weekly contributor Babs DeLay, Dr. Angela Dunn, state senator Luz Escamilla, University of Utah provost Dr. Martell Teasley and Fox 13 reporter Ben Winslow.

Steve Hofstetter
Comedian Steve Hofstetter is not taking any of your crap. You can tell by the way his YouTube page is filled with incidents involving the takedown of hecklers—and not just his own takedowns of hecklers, either. It's not that he can't handle his business, as evidenced by a video in which he challenges a woman who insists that it's an acceptable regional variant to refer to "heckling" as "hackling." But he's also got the back of fellow comedians who aren't about to tolerate someone making everyone else's life miserable.

What's clear from Hofstetter's material is that he has zero tolerance for lack of consideration and stupidity. His hilarious 2021 Dry Bar Comedy special finds him laying into people who think parenthood makes them special, an airport traveler whose dog poops in the concourse, and—in one particularly memorable anecdote—a flight attendant who tries to turn his pillow into a potential safety hazard. Even children are not free from the barbs of his wit, as he compares the intelligence of kids with the intelligence of his dog: "Dogs are way smarter than kids. Oh, I have proof. I own a home, and all of my electrical outlets are uncovered. ... My dog's never been like 'aaaahhh!' [pantomimes sticking its paw in a socket] because he's good at being alive."