Mystery Escape Room Virtual Adventures
Plenty of businesses involved in live entertainment were forced to start from scratch when re-thinking how to create a business model that would work during a pandemic. Fortunately for Mystery Escape Room, according to owner Les Pardew, their business already had an infrastructure in place. "We developed our first virtual Escape Room three years ago," Pardew says. "They were designed primarily as a team-building activity for businesses, about how they teach teams to be teams when they're not really together. But when I had my place shut down, this was one thing we could go to, so we jumped on it. ... The three years we've been doing this came in handy."

Like the in-person Mystery Escape Room adventures, the virtual versions (mysteryescaperoom.com) involve a series of puzzles for a group to solve in about an hour. Designed for 4-8 people, the online options include a "Superhero Escape Adventure" ($75) and a brand-new Nancy Drew adventure ($85, pictured) that involves searching for clues in a creepy old mansion.

Pardew says that the virtual adventures have been a great success, including drawing business from Europe, where "we had done nothing prior to coronavirus." But one key element for Pardew is that these games provide an opportunity to connect people who might not have been able to share a fun experience even before the pandemic. "We had a grandma and grandpa from Salt Lake City able to play with their daughter and grandchildren in Boston," he says. "The grandparents weren't the most astute at technology, but we did it, and it was heartwarming to bring them together. Even past coronoavirus, this offers some great opportunities to bring people separated by distance together." (Scott Renshaw)

The Parker Theatre: Corona Conundrum
Nearly two months after live theater was forced to shut down for the pandemic, most companies are still determining what comes next. For James Parker—executive director of The Parker Theatre (parkertheatre.org), formerly Children's Theatre of Utah—the announcement that some businesses could reopen in early May sparked a rapid response. "When we heard that things could open up," Parker says, "we looked at it and thought, 'Theaters are trying to figure out how to do what they do normally. And that's very difficult.'"

Instead, Parker Theatre quickly developed an alternative. The result is Corona Conundrum, a 40-minute showcase of short, family-friendly skits and sketches opening May 15, focused around the unique challenges of this time, from online dating in a time of social distancing to the perils of toilet paper shortages—all written, rehearsed and produced in approximately 13 days. "We understand that it's a serious thing, and we don't want to be overly irreverent," Parker says. "But there's this funny human behavior going on, and we're feeling bizarre and out of sorts."

The short running time was designed to help people feel better getting back out into a theater, and that's one of many protocols put in place to facilitate a safe production, from the set design for the actors—often placing them on separate platforms—to reduced seating capacity and lack of physical tickets changing hands. Nevertheless, Parker acknowledges feeling nervous about being the first local theater to test the waters, and whether people will come. "Somebody has to break the ice, right?," he says. "We don't know if people feel comfortable yet, but it's like, let's break the ice now." (SR) 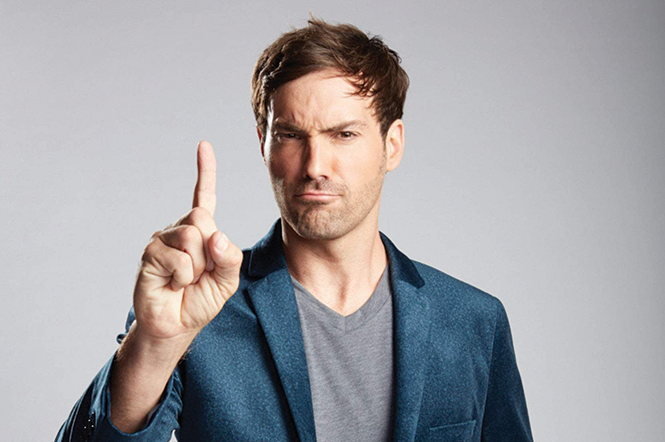 Jeff Dye @ Wiseguys
For most of the past two months, live-and-in-person entertainment has been pretty hard to come by. But with the early May relaxation of some statewide restrictions, people will gradually have chances to enjoy live performances again—with Wiseguys Comedy among the first venues to invite guests back.

Wiseguys locations at The Gateway and in Ogden re-opened during the first week of May, welcoming local, regional and touring comedians back at a time when we all need laughs. According to a Facebook post by Wiseguys owners Keith and Noelle Stubbs, the clubs are instituting a variety of precautionary guidelines to increase the safety of guests, including limited seating capacity, allowing 6 feet of room between seated tables, checking temperatures of all guests, increasing disinfecting and using only disposable menus and plates.

A return to the stage is a welcome change for comedians like Last Comic Standing alum Jeff Dye, who headlines at Wiseguys Gateway May 15-16, 7 p.m. & 9:30 p.m. (wiseguyscomedy.com). According to Dye, he's been spending his quarantine in Sherman Oaks, Calif., with his puppy, Bub, creating episodes for his podcast and watching "A LOT of TV and movies." He acknowledges being nervous getting back on stage after a long layoff, "but anything is better than telling jokes via Skype."

As for whether he will incorporate new material about the pandemic into his act, Dye says, "I think it's always good to address something of this magnitude. You almost have to. Iwouldn't ever joke about the deaths, but Ithink there's a lot of room to joke about the things we are all going through." (SR)

Swaner Preserve Virtual Classes
A mostly-outdoor venue like Swaner Preserve and EcoCenter in Park City might be a prime candidate to re-launch as Utah re-opens parts of the state economy. Indeed, more than 10 miles of trails on the north side of the preserve are open to the public, keeping in mind social distancing guidelines. For now, however, most of the preserve's other programs and facilities remain closed until around June 1, according to Hunter Klingensmith, visitor experience coordinator for Swaner.

That doesn't mean that you can't still take advantage of the knowledge and experience provided by Swaner Preserve's programming. "One of the first things that we did [during the pandemic] was, we sent out a community needs assessment survey," says Klingensmith. "We found out that most people who responded were interested in online programming, things that people could be doing while they're home."

The resulting virtual workshops have been quite successful, according to Klingensmith, with as many as 75-170 people registering either to watch live or at a later time. Recent programs have included identifying and removing noxious garden weeds; upcoming programs include Backyard Composting on Tuesday, May 19, 6:30 p.m., for a $7 registration fee.

Klingensmith adds that the response has been so positive, virtual programming is likely to continue in some form even after live programming begins again, to provide additional accessibility or an ongoing connection for Swaner members who might live elsewhere and have second homes in Park City. Plus, she adds, "A lot of people have said that they like it at home more, because they can be at home, sit on their couch, drink a beer." (SR)