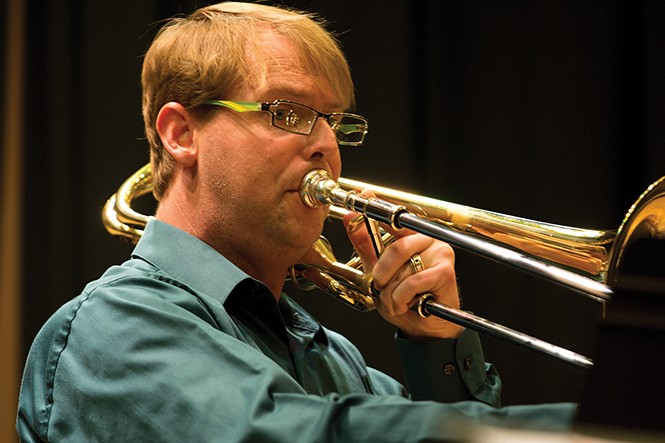 The focus of the concert—and the inspiration for its title—is on two trumpets and one trombone playing modern music pieces (trombonist Matthew Driscoll is pictured). Most notable is the debut of the first piece written entirely by a Salty Cricket composer and performed by students from the Salty Cricket Educational Initiative. Also on the bill is artist-in-residence Noriko Kishi performing audience-favorite solo cello commissions.

Salty Cricket Executive Director Victoria Petro-Eschler says, while many different chamber music groups call Salt Lake City home, no one else is focusing on modern classical music or primarily championing music by composers living and working in Utah. "It's basically like having the Beethovens of our day, live, right now," she says.

Each concert is unique, featuring pieces that haven't been performed before and focusing on new composers, musical styles and compositional voices. To match this dynamic mission, Salty Cricket has made its performing home in the Urban Arts Gallery, which also prominently features local modern art. "It's a really great visual space that we enjoy creating music in because the energy and the excitement are similar and they feed off each other," Petro-Eschler says.

The concert is dedicated to the memory of the late Monty Megargel, who died in April. He was husband to Salty composer Esther Megargel and all-around champion of the initiative. (Kylee Ehmann)

FRIDAY 5/19
Living Traditions Festival
For 32 years, the Living Traditions Festival has celebrated the many ethnic communities that have contributed to Salt Lake City's remarkably rich cultural tapestry. Nurtured and developed through the sponsorship and support of the Salt Lake City Arts Council, it offers three days of free festivities that incorporate entertainment, education and enlightenment. Music, dance, art, food, crafts and exhibits—representing people and cultures that settled here from places as far-flung as West Africa, Hawaii, Switzerland, Scotland, China and Eastern Europe—are shared and displayed, offering opportunities to embrace the diversity that makes our city so extraordinary.

"The scope of the festival hasn't changed a lot since its inception," Schaefer says. "However, we have definitely incorporated more artists and ethnic communities. It's a unique experience to connect with such a diverse group of cultures." (Lee Zimmerman)

FRIDAY 5/19
Tatiana Larsen: Liquid Gold
In its previous incarnation, the gallery known as Nox Contemporary hosted a series called "Alternative Genres" featuring video installations and performance art from some of the most avant-garde artists in the area. Owner John Sproul has recently reopened Nox in a downsized version at the same space and is gearing up for a new series.

Tatiana Svrckova Larsen, currently 8 months pregnant, will feed the audience milk and milk products for her performance-art installation Liquid Gold. The Slovakia-born artist—who's an adjunct art faculty member at the University of Utah, Weber State University and The Art Institute of Salt Lake City—has used food in other video and performance pieces before, and here turns motherhood into a metaphor for the creative act.

An artist, mother, teacher and wife, Larsen takes a multiplicity of roles borne by contemporary women and attempts to associate them in her work. In Liquid Gold, she compels us to re-examine the feminine, as well as our roles as viewers/consumers of art, in a visceral way. What food item could be more symbolic than milk? The title of the performance implies a commentary on the commodification of nourishment, as well as the high premium we place on what mother's milk represents culturally.

The performance is one-night-only in conjunction with the Salt Lake Gallery Stroll, but other works by Larsen—including remnants of the May 19 performance—will be on display throughout the month. (Brian Staker)

SATURDAY 5/20
Downtown Yoga Festival
Before the Downtown Yoga Festival, it was a chore seeking out all the various types of yoga and instructors scattered throughout the city. Now, if you're looking to branch out into a different technique, or just want to explore what else is out there, the festival can give you that opportunity for a relatively small cost.

Over the course of two days, the festival brings dozens of workshops and classes to Westminster College. You can learn arm balance poses from Bailey Swingle, try your hand at paddle-board yoga with Tiffany Harrison, hatha from Santosh Maknikar, belly dancing from Meg Hinds, kundalini from Natalie Buchi—and that's just the first day.

But yoga isn't simply about the exercise; it's about living healthy through practice and lifestyle changes. There are classes where you can learn about the psychology of yoga, the proper diet when starting out or incorporating it into your daily routine, even breathing and meditation courses that can make you more energized and alert—all of which you can learn during the two-day event.

"Let your inner bliss shine while dancing and enjoying the live music of our talented musicians," Manikar says via email. "This festival will unite the community in a celebration of life through unique programs with experienced yoga instructors, musicians, chefs and local businesses."