THURSDAY 5/25
Monroe Martin
Monroe Martin has made comedy out of his challenging childhood—including living in 15 different foster homes—but that doesn't mean he turned to being funny at an early age as a coping mechanism. In fact, he says by phone from his home in New York that, "I didn't necessarily want to be a comic or an entertainer when I was younger. ... [Then] one of my friends had me watch stand-up with him, and I found myself memorizing funny stuff and telling jokes as though I'd made them up on the spot."

His early attempts at stand-up didn't automatically point to future success, either. "When I first did comedy," he says, "I didn't know what the hell to do. I just started saying stuff—and it wasn't funny at all. I got banned from a club for two months because I would go up and start saying the most random nonsense. Then I started hanging out around other comics, and they kind of taught me, 'Bro, you write your ideas down and you present them to the audience.'"

Martin certainly has worked through those early growing pains, appearing on Last Comic Standing and The Artie Lange Show and fine-tuning a style that finds hilarious twists on familiar topics like bad dates and pregnancy scares. This weekend's visit marks his first-ever Salt Lake City gig, and Martin hopes to introduce himself casually. "If you meet a stranger, we're always put off by the guy who opens up way too quick," he says. "Before you even shake their hand, it's, 'I'm going through a divorce.' If you come in and you're cool, then you can ease them into more real stuff." (Scott Renshaw)

FRIDAY 5/26
Utah Symphony: The Rite of Spring
While a majority of contemporary popular music seems designed to elicit a visceral response, it's really nothing new. Some of the great symphonic compositions of the past century were conceived as spectacles basen on sumptuous aural imagery. One such composition, Igor Stravinsky's The Rite of Spring, was so strikingly revolutionary that it legendarily caused a near riot when it made its Paris debut in 1913. Originally conceived as orchestration to accompany ballet choreographed by Vaslav Nijinsky—which was daring for its time—it later achieved greater distinction as a stand-alone masterpiece that's still considered an avant-garde original, no less striking or sensual more than a century later.

Consequently, the final presentation of the Utah Symphony's 2016-17 season ups the ante by combining The Rite of Spring with Tchaikovsky's Souvenir d'un Lieu Cher. The orchestra's principal librarian, Clovis Lark, describes the program as "a unique chance to encounter two great works exploring primitivism in Central Asia and the Americas."

Conducted by Musical Director Thierry Fischer and featuring acclaimed young violinist Simone Porter (pictured), The Rite of Spring deserves its star billing, both for its masterful blend of tone and texture and the sensuous theme that extols liberation and reawakening. The pagan precepts still resonate, creating a visceral effect that even today's edgiest auteurs—Lady Gaga, Arcade Fire and Madonna among them—might find cause to admire for both boldness and bravado. (Lee Zimmerman) 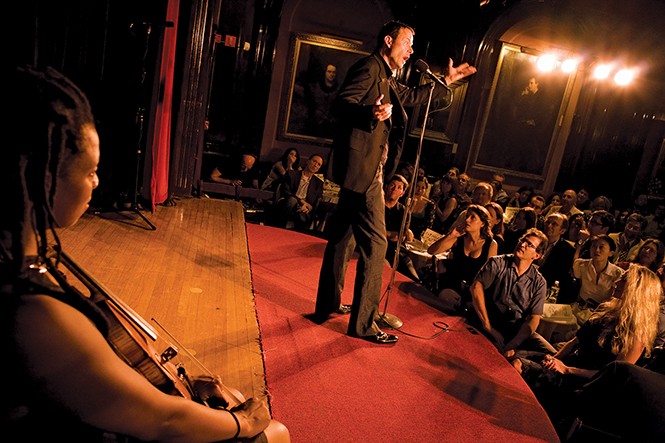 TUESDAY 5/30
The Moth Live: Between Worlds
While many media organizations seem most interested in shouting at and over each other, the nonprofit storytelling group The Moth wants to listen.

For two decades, it's provided a platform for people to stand alone and tell their stories. Millions of listeners have enjoyed their Peabody Award-winning radio show, The Moth Radio Hour, their eponymous podcast and their live shows. Presented by KUER, The Moth is bringing their dedication to storytelling and listening to Utah with their show Between Worlds.

Jenifer Hixon, senior producer for The Moth and director of the Salt Lake City show, says the "between worlds" theme was chosen because it's a broad enough topic to encompass everything from becoming a mother to a smaller, less monumental events.

"I want the stories to all be really different," she says. "I think it's a better show if you have a rainbow of stories. If the stories are all about the same thing, they end up competing instead of complementing each other."

Each story, presented without notes, centers around people right on the cusp of a turning point in their lives. The storytellers include people from Salt Lake City, other U.S. cities and Israel. Some of their tales will feel familiar to the audience, Hixon says, while others will take listeners to places they've never imagined.

"It's lively because there's a tightrope feeling to it," she says. "The person's up there alone without a net, sharing a part of themselves." (Kylee Ehmann)

TUESDAY 5/30
Rodgers & Hammerstein's Cinderella
If your familiarity with the story of Cinderella is limited to the Disney film, Cinderella cast member Joanna Johnson (pictured, center) feels it's only fair that audiences should be prepared: "There are no talking animals," she says.

That's far from the only difference in this touring production of the 2012 Broadway version, which adapts the Rodgers & Hammerstein musical created for television in 1957. Johnson—a Grantsville native—plays Charlotte, a character that most people would refer to as one of the "wicked stepsisters." That's not the way this version unfolds, however, according to Johnson.

"My character is kind of not bright enough to notice that others around her are not being treated well," Johnson says. "When I first booked the job, I thought, 'Oh, I get to be nasty.' Then I read the script, and she does not do one malicious thing."

She'll be showing off that unique version of a Cinderella stepsister to an audience that she knows will include friends and family members, as she returns to Utah in her first touring production role. While that dynamic presents a few distinct challenges—"I don't want to be thinking, 'My first grade teacher is here; don't disappoint her,'" Johnson says—she's also excited to bring this family-friendly, visually dazzling production with Tony Award-winning costumes to her hometown, and keep in mind this is just one stop. "There is this moment when you get on stage, and then it's like, 'Oh, it's home,'" Johnson says. "The show becomes your rock." (Scott Renshaw)