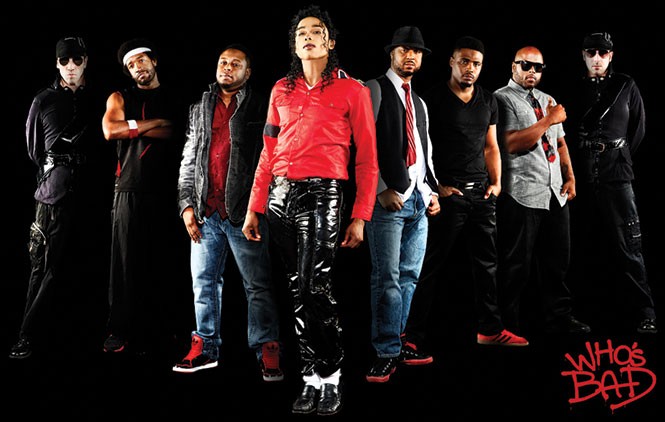 THURSDAY 5.26
Who's Bad? The Ultimate Michael Jackson Tribute
The recent passing of Prince once again reminded music fans that we will always have finite time to appreciate great performers. Sometimes they'll be gone before we have a chance to see them in person, and all that's left is to speculate on what that experience might have been in life.

"Tribute" acts have been part of the pop-culture landscape for decades, and for some they can seem like a shallow substitute for the real thing. Yet, at their best, they can provide that sense of what it must have been like to be dazzled by a master showman like Michael Jackson. This week, Who's Bad? The Ultimate Michael Jackson Tribute comes to Park City for a four-performance stop recreating the music, dancing and spectacle of the King of Pop, from the Jackson 5 era through his record-breaking solo career.

The only Michael Jackson tribute act to have launched before Jackson's passing in 2009, Who's Bad? has performed sold-out shows throughout the U.S. and U.K., delivering songs that defined a generation: "Billie Jean," "Beat It," "Thriller," "Smooth Criminal" and much more. And it's all accompanied by some of the most iconic moonwalking, crotch-grabbing, zombie-walking choreography of that same era. Frontmen Joseph Bell and Taalib York lead a crew of Broadway-veteran dancers and talented musicians in a performance that can remind a new generation how Jackson became one of the most popular entertainers the world has ever seen. (Scott Renshaw)
Who's Bad? The Ultimate Michael Jackson Tribute @ Egyptian Theatre, 328 Main, Park City, 435-649-9371, May 26-28 @ 8 p.m., May 29 @ 6 p.m., $23-$45. EgyptianTheatreCompany.org

THURSDAY 5.26
J. Kael Weston: The Mirror Test
As an official for the U.S. State Department, Utah native J. Kael Weston was on the ground in Baghdad's "Green Zone" during the early days of the American occupation in 2003. For the next seven years, through postings as liaison to military commanders in Iraq and Afghanistan, he observed up close the effects of seemingly perpetual warfare on both the local inhabitants and on the American soldiers who served there—those who survived, those who died and those who were changed forever by wounds both physical and mental.

The title of The Mirror Test refers in part to how a badly injured patient responds to the first time they see themselves, often with a new face they no longer recognize. But it also refers to the nation's need to look at itself, and stare hard at the consequences of nearly 15 years of military action in the Middle East.

In this unique combination of memoir and memorial, Weston takes us along on his journeys in the most dangerous theaters of these wars, including Fallujah and Khost, as those on the ground attempt to make sense of U.S. government policy objectives. But while he provides grim details about military operations—including the "processing" of Iraqi corpses for burial—he also casts a broad view of American actions over the course of 70 years, from Topaz to Abu Ghraib, exposing the unpleasant things we're capable of when we're afraid, and who winds up paying the price for that fear. (SR)
J. Kael Weston: The Mirror Test: America at War in Iraq and Afghanistan @ The King's English Bookshop, 1511 S. 1500 East, 801-484-9100, May 26, 7 p.m., free. KingsEnglish.com 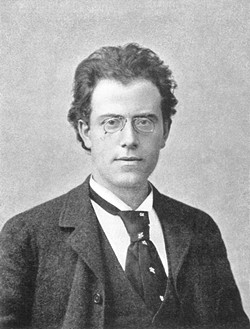 FRIDAY 5.27
Utah Symphony: Mahler's Symphony No. 9
If there is a composer the Utah Symphony has a historical connection with, it's Gustav Mahler. Former Utah Symphony conductor Maurice Abravanel was a leading proponent of bringing the Austrian composer to American audiences. As former associate conductor Ardean Watts put it, in an interview quoted on the Utah Symphony website, "I think of Maurice as a kind of high priest. And Mahler's the Bible."

The Utah Symphony first performed a Mahler work in 1951, and drew international attention in 1963 when Abravanel conducted "Symphony for a Thousand" with close to that many people—800—on stage for a performance that included an expanded orchestra, vocal soloists and even a choir of local school children. Abravanel went on to lead the orchestra in notable recordings of Mahler, and the Utah Symphony became the first American ensemble to record all 10 of his symphonies.

The tradition continued into the 21st century, as the Utah Symphony played the complete Mahler works in 2009 under Keith Lockhart. This weekend marks the end of two seasons where the orchestra again performed the entire Mahler canon, now under maestro Thierry Fischer.

Mahler's Symphony No. 9, completed in 1909, was the last work he finished in his life, and he never heard it performed. Many consider the Ninth to be his greatest achievement.

FRIDAY 5.27
The Painted Veil
The veil can serve as a metaphor for the power of art to conceal, even as it reveals. The veil as an object acts out that concealment. While it's usually not given attention in and of itself, but rather in relation to the concealed item, the exhibit The Painted Veil makes the veil the thing.

Fifteen Utah-based artists have created works in installation, painting, photography, sculpture and video on the theme of veils, including Trent Alvey, Jan Andrews, Christine Baczek, Christine, Jared Lindsay Clark, Daniel Everett, Jenevieve Hubbard, Sarinda Jones, Amy Jorgensen, Beth Krensky, Stephanie Leitch, Lizze Määttälä, Colour Maisch (whose work is pictured), Jared Steffensen, Roland Thompson and Brian Usher. Of what might a veil be made? Glass, paint, wax, film, paper and resins offer different levels and layers of transparency, translucency and opacity in this show. These works demand not just to be seen on the surface, but to be looked into.

The show's curator, Jorge Rojas, serves as the director of education and engagement at the Utah Museum of Fine Arts at the University of Utah, and was inspired to coordinate the show—and take its title—from Percy Bysshe Shelley's poem "Lift Not the Painted Veil." The title also recalls the author Tom Wolfe's book The Painted Word, and makes one think about the ways in which visual art functions like a language, simultaneously obfuscating and revealing. The mystery of creation remains, but it has likely been given added complexity and depth. (Brian Staker)
The Painted Veil @ Rio Gallery, 300 S. Rio Grande St., 801-245-7272, through July 8, Monday-Friday, 8 a.m.-5 p.m. VisualArts.Utah.gov 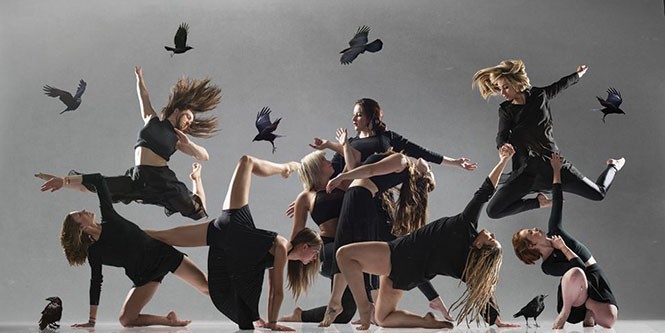 SATURDAY 5.28
Creator's Grid
The work produced by the Creator's Grid events has been a step toward the reinvention of the local dance scene. Each month, Myriad Dance Co. hosts an evening where dedicated choreographers and dancers have a chance to create brand-new works, free of any constraints or guidelines. Co-founders Temria Airmet and Ashlee Vilos were inspired by the Carnival showcase in Los Angeles, and wanted to bring that same indie house-show feeling to Salt Lake City.

Participants are given a set amount of time to work with dancers they recruit, and bring it in for a one-night-only performance that you may never see again elsewhere. This month's showcase is the fifth installment, and features performers from different styles mixing it up with their own voice and artistic expression. You'll be able to see new and original works from Ulysses Gonzalez (Underground Dance Crew), Temria Airmet (Myriad Dance Co.), Diego Ballesteros (Odyssey Dance Theatre), Kate Overholt (Arts of Chaos) and Tonga Lavulo (Blowup Kingz). (Gavin Sheehan)
Myriad Dance Co.: Creator's Grid @ The Metro, 615 W. 100 South, May 28, 9 p.m., $10. Facebook.com/MyriadDanceCompany