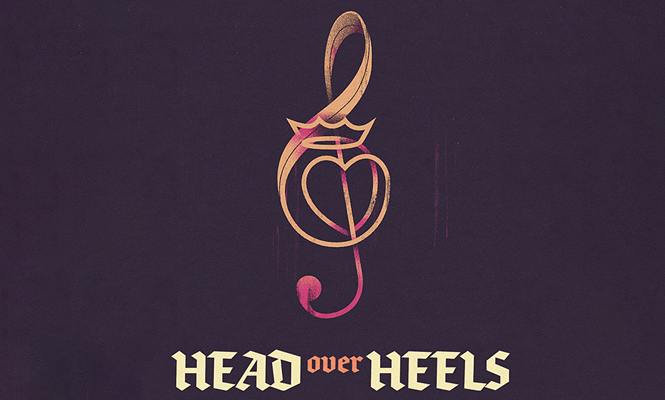 The Grand Theatre: Head Over Heels
The Go-Go's were 1980s icons, emerging from the early '80s Los Angeles punk scene to become MTV-era darlings, the first-ever all-woman band to have a number 1 album writing their own songs and playing their own instruments, and eventually Rock and Roll Hall of Famers. So when it came to considering how to adapting their catalog of songs for the jukebox musical Head Over Heels in 2015, writer Jeff Whitty naturally turned to ... a 16th-century prose romance.

No, seriously. Philip Sidney's The Countess of Pembroke's Arcadia forms the armature for this stage adaptation, involving a long-ago kingdom that exists in a state of peace and prosperity because ... well, they've got the Beat. Their happiness faces a potential disruption, however, when the King learns of four strange prophecies involving himself, his queen and his two beloved daughters, which if fulfilled, would lead to the kingdom losing its Beat. Thus begins a fanciful, funny, gender-and-sexuality-fluid romp about societal change, set not just to classic hits by the Go-Go's and Belinda Carlisle—including "Our Lips are Sealed," "Vacation," "We Got the Beat," "Head Over Heels," "Mad About You" and "Heaven is a Place on Earth"—but plenty of great deep cuts as well.

Head Over Heels plays at The Grand Theatre at Salt Lake Community College (1575 S. State), May 25 – June 18, with performances Wednesdays – Saturdays at 7:30 p.m., and 2 p.m. Saturday matinees. Tickets are $27; masking is recommended for attendees but not required. Visit grandtheatrecompany.com for tickets and additional information. (Scott Renshaw)

IFSC Climbing World Cup
Those who watched the 2021 Summer Olympics from Tokyo had the chance to see a brand-new sport added to the competition lineup: sports climbing, the fascinating sport that takes the skill set of outdoor climbing and applies it to indoor climbing walls for speed, bouldering and lead. That Olympic debut even had an extra little bit of Utah interest, as local competitor Nathaniel Coleman landed a silver medal in the combined event.

This month, USA Climbing hosts an IFSC-sanctioned World Cup event in Utah, wrapping up May 27 – 29 with speed-climbing and bouldering events. The lineup is expected to include the entire medal podium from Tokyo, in Coleman, Spain's Alberto Ginéz López and Austria's Jakob Schubert. Bouldering competitors from the U.S. are scheduled to include Sean Bailey, Natalia Grossman, Colin Duffy and Brooke Raboutou, plus speed-climbers Noah Bratschi and Emma Hunt (pictured). Experts note that the higher-altitude conditions in Salt Lake City offer the potential for plenty of broken records, as happened in 2021 when the current speed-climbing record was set by Indonesia's Veddriq Leonardo.

Utah Symphony Season Finale
It's been a whirlwind of a couple of years for arts organizations, but the Utah Symphony has certainly faced some unique situations in the return to sort-of-normal. The company instituted strict vaccination/negative COVID test and masking requirements as the season launched in September, a health-conscious policy that still might have affected some potential attendees' decisions. Then, music director/conductor Thierry Fischer's planned departure at the end of this season was postponed for ayear, when COVID made the search for a replacement more complicated.

Through all that, Utah Symphony has presented a wonderful season of pops, masterworks and "symphony for the screen" performances, wrapping up with this weekend's program. Maestro Fischer (pictured) conducts Beethoven's violin concerto (with featured soloist Veronika Eberle); Messiaen's "The Resurrected and the Song of the Star Aldebaran" and "Zion Park and the Celestial City" from Des canyons aux étoiles, a 1974 piece inspired by visits to Utah's Bryce Canyon (the full work will be performed in Springdale's O.C. Tanner outdoor amphitheater on Thursday, June 2); and Suite No. 2 from Ravel's 1912 ballet Daphnis et Chloé. The Symphony then moves into its summer season, before getting ready for Fischer's farewell season in the fall.

Scandinavian Festival
If you're new-ish to Utah, you might wonder a little bit about the prevalence of certain last names: Jensen, Sorensen, Christensen and so on. That has a lot to do with the early success of missionaries from the Church of Jesus Christ of Latter-day Saints in Norway, Denmark and Sweden in the latter part of the 19th century, leading to an influx of some 30,000 new converts to Utah; in the 1900 census, Scandinavians formed 34 percent of Utah's population.

That substantial cultural history forms the foundation of the annual Scandinavian Festival, which is hosted by the city of Ephraim over Memorial Day weekend. The centerpiece event is the parade, which takes place at 10 a.m. Saturday morning, but that's far from the only reason to visit. Plenty of traditional games are available for guest participation, including molkky (a Finnish throwing game) and varpa (a Viking-era stone-throwing game similar to horseshoes). Heritage Conference history talks take place both days at the Snow College Library, and Pioneer Reenactment Groups bring the tales of early Scandinavian immigrants to Utah into focus. Of course, there are plenty of food and vendor booths for families to enjoy on the festival days. Plus, the centerpiece music performance features 1970s Top 40 icon Al Stewart ("The Year of the Cat").

The Scandinavian Festival centers around the intersection of College Ave. and Main St. in Ephraim on Friday (10 a.m. – 8 p.m.) and Saturday 9 a.m. – 6 p.m., free to the public. Visit scandinavianfestival.org for full schedule and additional event information. (SR)