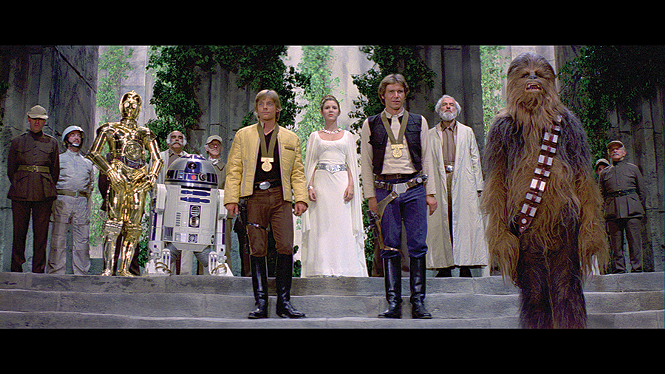 Star Wars: A New Hopein concert with Utah Symphony
Longtime viewers of Saturday Night Live might recall an early skit that featured Bill Murray playing an enthusiastic lounge singer with a penchant for turning popular music into corny showbiz shtick. A preferred part of the routine found him adding lyrics to the Star Wars theme: "Star Wars, nothing but ... Star Wars!"

Even that hokey performance, however, couldn't diminish the power and presence of John Williams' remarkable score. That becomes apparent when the Utah Symphony screens the seminal 1977 Star Wars installment A New Hope while performing the soundtrack live. It's an opportunity to experience the movie and the music in an entirely new way.

"John Williams is one of the greatest composers of our time, and the music that he composed for Star Warsis undoubtedly some of the best he ever wrote," Utah Symphony Associate Conductor Conner Gray Covington notes via email. "The music is very demanding for the orchestra, because the string and woodwind parts are fiendishly difficult, as well as extremely taxing for the brass players. However, so many of us grew up loving these movies and this music, and the chance to play the score live with the film is a real treat for us."

Likewise, it promises to be a real treat for the audience. "I can't imagine watching the opening of the film, with the words scrolling down the screen, without that epic trumpet fanfare and the expansive string melody," Covington adds. We're sure Bill Murray would agree. (Lee Zimmerman)

Jen Kirkman
Jen Kirkman has a singular way of blending the mundane with the outrageous, whether it's an anecdote about a vacation in Italy that concludes with a grim twist or a story about a high school "pregnancy scare" that features an extended digression on the Dewey decimal system. Her stand-up never feels like it's pushing the envelope for its own sake, but you can definitely identify a certain fearlessness in her ability to lean into the more unsavory aspects of her personal life or drive home a point that's as uncomfortable as it is hilarious.

This unique approach has made Kirkman a perennial favorite on the comedy podcast circuit, as well as on cable programming such as Drunk History and @midnight. Over the course of two decades, Kirkman has written two books, been on the writing staff for television shows including Chelsea Lately, Phineas and Ferb and The Marvelous Mrs. Maisel, and co-founded the (sadly short-lived) comedy website girlcomic.net along with Becky Donohue.

Still, stand-up seems to hold a special place for her, as evidenced by Netflix specials like 2015's I'm Gonna Die Alone (and I Feel Fine) and 2017's Just Keep Livin'? "I like to be in total control of the comedy that I'm putting out there," Kirkman said in a 2017 interview with Bandcamp Daily. "I don't do well with network notes. I don't do well with sharing the stage. I don't do well with input from others." Kirkman performs an "hour of comedy you haven't already seen on Netflix" Friday and Saturday. (Nic Renshaw)

Pioneer Theatre Co.: Grease
The 1971 Jim Jacobs and Warren Casey musical Grease was created to capture nostalgia for a specific era—so it's perhaps only fitting that this show has itself become a nostalgic object, most commonly for the hit 1978 film version starring John Travolta and Olivia Newton-John as protagonists Danny and Sandy. "I remember when the movie came out and how it was such a big deal—a hugely successful film adaptation of a Broadway musical," says Pioneer Theatre Co. Artistic Director Karen Azenberg, who also directed and choreographed PTC's production. "It was something to love and make fun of all at the same time."

There's still plenty to love in the show, which follows the lives and loves of students at fictional Rydell High School circa 1959. Musical numbers like "Summer Nights," "Beauty School Dropout," "We Go Together" and Azenberg's personal favorite, "Greased Lightning," continue to delight those who grew up with the movie, as well as an entirely new generation, with those swooned-over leather jackets and slicked-back pompadours.

Azenberg is aware that some of the show's content might play a bit differently more than 40 years after its premiere, and it has always included potentially controversial topics like a teen pregnancy scare. But she says, "We have tried to approach the piece recognizing the naiveté and innocence of the era, which hopefully also recognizes—and reminds audience members—that although we have a come a long ways, we still have a long ways to go with respect to how we look at one another." (Scott Renshaw)

UtahCann: Cannabis Business Conference & Expo
For supporters of the therapeutic qualities of cannabis, 2018 was a special year in Utah. Proposition 2 was passed by voters, legalizing medicinal cannabis use (even if the Legislature ultimately stepped in to create a substitute version of the law). Last year also marked the first-ever conference devoted to issues surrounding medical cannabinoid use—UtahCann—which continues this year with the second annual event.

UtahCann brings together the business, legal, agricultural and medical components of the cannabis industry—in an expanded setting at the Utah State Fairpark that allows for a separation of show floor and speakers—for education on a topic still characterized by misinformation and fear-mongering. More than 50 vendors provide supplies and information to complement a program of speakers and breakout sessions on topics including the cannabis supply chain, health benefits and ways to start a legal cannabis business in Utah. Former overstock.com CEO and current High Times board member Stormy Simon closes out the two days of activities with a talk on "The 55 Billion Dollar Underground Industry That Managed to Succeed."

Among the key scheduled participants are Richard Oborn and Andrew Rigby, representing the Utah State Department of Health and Department of Agriculture, respectively. "The impact of the two divisions in the state of Utah that will be most involved with shaping policy is a huge complement to our show," Joel Smith, one of the event organizers, says. "UtahCann has become a gathering place and a community." (SR)