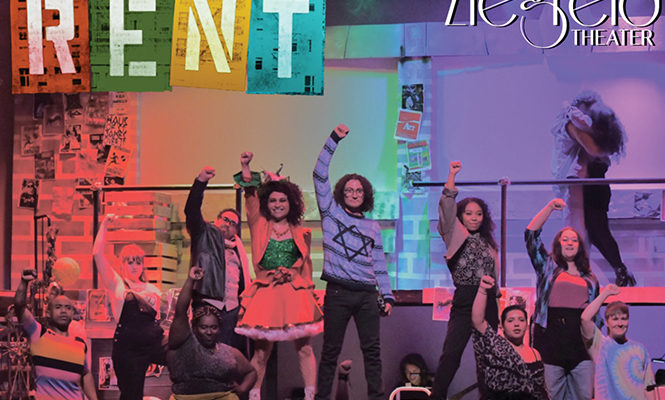 Ziegfeld Theater's Rent @ Park City Egyptian Theatre
Utah's theater scene is so rich that it's easy to miss something, even if you're trying to pay attention. In October, Ogden's Ziegfeld Theater wrapped its production of Jonathan Larson's Rent at its own space, but if you didn't catch it then, you've been given a reprieve of another ... well, I'm not sure exactly how many minutes, in order to make a clever play on the popular Rent tune "Seasons of Love," but it's enough.

Park City's Egyptian Theatre (328 Main St.) hosts Ziegfeld's Rent, a 1980s-set tale of struggling, aspiring artists in New York inspired by the classic Puccini opera La boheme. While the legend of Rent is now inevitably linked to the tragic death of writer/composer Larson on the eve of the show's Broadway debut, it's no mere act of sympathy and charity that has carried it to lasting popularity. The play earned both the Pulitzer Prize for Drama and the Tony Award for Best Musical in 1996, and the power of the story—including tragic romances and creative struggles—has touched audiences for nearly 30 years, along with memorable songs like the aforementioned "Seasons of Love."

Rent plays at the Egyptian Theatre through Nov. 26, with evening performances at 8 p.m. Tickets are $23 - $35, visit parkcityshows.com for tickets and additional event information. If you want to catch what's going on right now at the Ziegfeld in Ogden (3934 S. Washington Blvd.), Elf the Musical takes off with the beloved holiday story of Buddy the Elf on Dec. 2, running through Dec. 23. Tickets are $22.95 - $24.95; visit zigarts.com for tickets. (Scott Renshaw)

Utah Symphony & Chorus: Messiah Sing-in
If you haven't already officially started your holiday season—and it does seem to begin earlier every year—Thanksgiving weekend certainly feels like the launch date. That's one reason it has been the usual time for one of Utah's most beloved Christmas season traditions, as the Utah Symphony & Chorus invites guests to sing along with the powerful music of Handel's Messiah.

Conductor Benjamin Manis leads the symphony, and chorusmaster Michaella Calzaretta leads the chorus (pictured), as the 1741 oratorio rings through the concert hall. Though inspired by the Biblical story of Jesus—including the Messianic prophecies of the Old Testament and Jesus' life, death and resurrection—its structure was inspired by Handel's devotion to the three-act structure of Italian opera. Perhaps surprisingly to those unfamiliar with the entire work, it's most famous individual section—the "Hallelujah" chorus—comes not at the end of overall work, but at the end of the second act, which signals the triumph over death. And audience members, as is part of the performance's long-standing tradition, are invited to sing along in celebration.

You can join the Utah Symphony & Chorus for the performance of Messiah on one of the two performance dates—Saturday, Nov. 26 or Sunday, Nov. 27—at 7 p.m. at Abravanel Hall (123 W. South Temple). Tickets range from a family-friendly $7.75 (less than the cost of a movie ticket) to $41. Performance scores, courtesy of Riverton Music, will also be available in the lobby for purchase. Visit utahsymphony.org for tickets and additional event information. (SR)

REDEEMher: How I Screwed Up My Perfect Mormon Life
In actor Tatum Langton's autobiographical one-woman show REDEEMher, she addresses something that could make anyone feel vulnerable: being involved in an extramarital affair, and how that experience was tangled up with her faith as a member of the Church of Jesus Christ of Latter-day Saints. And she acknowledges that it's a challenge to present that experience in a way that recognizes the complexities of a strained marriage.

"It did take me about 10 years where I could get to the point where I could [tell this story]," Langton says by phone. "This isn't a story that gets told a lot, from the perspective of someone who did the adultery. ... Everyone knows there's two sides to every story, but we're always reluctant to listen to the person we perceive as 'wrong.' Every time I perform it, I question, 'Am I making myself too much the victim, and my ex-husband too much the villain?'"

Langton has performed REDEEMher previously, but this week marks the first time performing the show in Utah County, where the events took place. Though some friends and family have already seen it in a virtual presentation, Langton acknowledges "there is a bit of anxiety around [performing it in Utah]; I do hope people will have an open heart and open mind about it."

Broadway at the Eccles: Moulin Rouge!
Fun bit of trivia: Director Baz Luhrmann's 2001 film Moulin Rouge! was the first feature review I wrote for this publication. The filmmaker brought his extravagant visual style to the turn-of-the-20th-century tale of a young aspiring composer and an actress falling in love at the legendary Paris cabaret club, set to classic pop hits of the subsequent decades. It was a narrative full of big emotions and bold stylistic choices—which, as it turns out, made it a perfect candidate to adapt for a theatrical musical, which hit Broadway in 2019.

Moulin Rouge!: The Musical keeps the central relationship involving songwriter Christian and actress Satine, involving a bit of mistaken identity as Satine originally believes that Christian is the wealthy Duke whose fortunes might save the financially-strapped club. Additional complications inevitably ensue, including threats of death, against the backdrop of plenty of great tunes, many of them familiar from the movie version: Elton John's "Your Song," Madonna's "Material Girl," U2's "Pride (In the Name of Love)" and many more, plus the only original tune, the love ballad "Come What May." Add in the spectacular production design and costumes, and you have the stuff of a show that won 10 Tony Awards.

Broadway at the Eccles brings Moulin Rouge!: The Musical to the Eccles Theater (131 S. Main St.) Nov. 30 – Dec. 11. Evening performances are Tuesday – Sunday with varying showtimes, including matinee performances on Dec. 1, 3, 4, 10 and 11; tickets are $50 - $119.50. Visit arttix.org to purchase tickets and for additional event information. (SR)