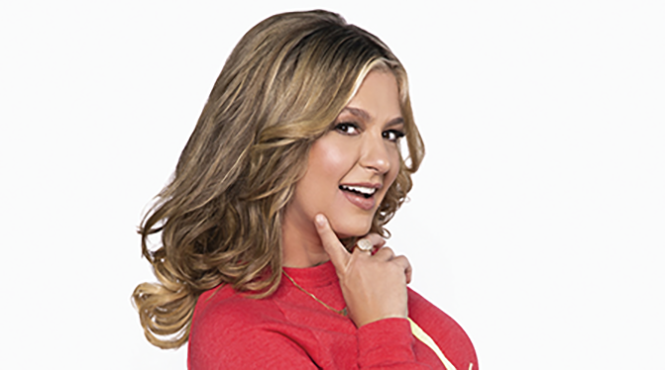 Christina P @ Wiseguys
Though her husband Tom Segura came through town just a few weeks ago, it makes sense that Christina P (née Paszitsky) is making her stand-up visit to Salt Lake City on her own timeline. Sure, the two share the hosting duties on the podcast Your Mom's House, but their comedy careers are distinctly their own. After all, it wasn't Segura who first became nationally-known by appearing on the MTV reality show Road Rules in the 1990s, or who was part of the writing staff for Chelsea Lately.

Nor would Segura be able to dive into the complexities of motherhood, the way Christina P does in her 2017 Netflix special Mother Inferior. She explores the difference between "boobies" and "mom tits," and addresses the way new moms inevitably hate their partners "just ... a lot" for their relative freedom to get on with their lives. And she certainly enjoys puncturing the romanticism that surrounds the notion of motherhood. "A woman carries you lovingly in her body for nine months ... then carries her in her arms for two more years, and feeds you, and reads to you and loves you," she says. "And I gotta tell you, most of you? Not worth it. Lots of goddamn losers on this planet."

Christina P visits Wiseguys Gateway (194 S. 400 West) for five shows Nov. 26-28, rescheduled from dates earlier this year that she had to cancel after surgery for a broken leg. Tickets are $35; visit wiseguyscomedy.com for tickets and for current health and safety protocols. (Scott Renshaw)

Utah Symphony: Handel's Messiah
In 2020, Utah Symphony faced the unique challenge of figuring out whether there was any way to present their beloved annual tradition of Handel's Messiah, which typically included a "sing-along" portion of the famous "Hallelujah" chorus. After considering various possibilities, Utah Symphony eventually opted for an abbreviated, pre-recorded on-demand version which included 14-crowd sourced videos to bring in the community component that had always been so significant. "If we'd known how complicated it was going to be when it first came up, we wouldn't have done it," conductor Conner Covington said last year about the project's logistics. "But the final project was so worth it."

A year has passed, but normalcy has not yet returned to the Utah Symphony's performance of Messiah. While 2021 marks a return to a live presentation of George Frideric Handel's scripture-based 1714 oratorio, including the participation of Utah Opera resident artists and the Utah Opera chorus, there will be no audience-participation sing-along to "Hallelujah" in consideration for prioritizing community safety during the ongoing pandemic. Yet it remains a glorious way to celebrate the start of the Christmas season, with magnificent music and powerful voices ringing through Abravanel Hall.

Utah Symphony & Opera presents Handel's Messiah at Abravanel Hall (123 W. South Temple) on Nov. 27-28 at 7:30 p.m., with tickets available at family-friendly prices ranging from $7.75 - $26. Performances require proof of vaccination or negative test taken within 72 hours of entry; face coverings will be required of all unvaccinated audience members, and strongly encouraged for all patrons. Visit utahsymphony.org for tickets and additional information. (SR)

Mean Girls: The Musical
It was already a unique act of creative transformation from one medium to another when writer/co-star Tina Fey took the 2002 book Queen Bees and Wannabes—a non-fiction exploration of the damaging effects of teen girl cliques and social ostracization—and turned it into the lively 2004 comedy film hit Mean Girls. So it was almost a natural evolution when Fey turned Mean Girls into a full-on Broadway musical in 2017.

The story still focuses on Cady Heron, a teenager whose isolated life growing up home-schooled in Africa doesn't remotely prepare her for moving back to America and her first year ever at a public high school. She finds a pair of similarly outcast friends, who encourage her to infiltrate "the Plastics," the school's alpha-female trio of popular girls. But once Cady has the cachet of association with the popular girls, it's hard not to adopt their scorched-earth tactics. The tale gets its additional kick from the lively original score of songs, created by composer Jeff Richmond (who also happens to be Tina Fey's spouse) and lyricist Nell Benjamin (a Tony Award nominee for Legally Blonde as well as this show).

Oné Pagán: Drunk Flies and Stoned Dolphins
There's always a bit of a danger in over-anthropomorphizing animals, making them sympathetic to us only by virtue of how much we see some of ourselves in them. Still, there's a lot to be learned from the ways in which humans are not alone in the ways that they behave in the world—especially when it comes to behaviors that some people try to label as morally objectionable. It's a fascinating read, then, to learn from author and biologist Oné Pagán that getting high isn't an activity where we, the people, can claim exclusive domain.

In Drunk Flies and Stoned Dolphins: A Trip through the World of Animal Intoxication, Pagán—who previously explored the world of animal survival techniques in the book Strange Survivors—takes readers on a journey through many different case studies in the ways animals, through accident or intention, spend some of their lives in altered states of consciousness. The book includes a history that dates back to prehistoric times, and suggests that animals might have been using drugs recreationally in ways that humans actually learned from, like the possibility that we learned about coffee's stimulant effect from watching goats who had consumed coffee beans. From tales of insects and birds, to the dolphins who pass around an intoxicating pufferfish like sharing a joint, it's a fun and fascinating magical mystery tour.

Oné Pagán appears in a virtual author event on Wednesday, Dec. 1 at 2 p.m., sponsored by Weller Book Works. Access the event via Weller's YouTube channel, and order the book through the website at wellerbookworks.com. (SR)