Pygmalion Theatre Co.: White Savior
The two concepts that have dominated American news in 2020—the political discord inspired by the Donald Trump presidency, and the COVID-19 pandemic—collide in an unexpected way in Pygmalion Theatre Co.'s season-opener, White Savior. While the production of Catherine Filloux's world premiere—about family members clashing over their disparate political philosophies—was originally planned as a conventional theater show, before it became clear that it would have to become Pygmalion's first-ever recorded live performance. The production will be available free of charge (with donations welcome) at pygmalionproductions.org, Nov. 1-30.

According to the show's director and Pygmalion artistic director Fran Pruyn, there were plenty of unique complications involved in staging a show about family members that also took into account COVID-necessitated safety guidelines. "Getting the proximity was the biggest thing," she says. "It is a natural thing for human beings to have close relationships; you're not 10 feet away. And [the actors] have to be 10 feet away to be unmasked. ... Every natural instinct was sort of thwarted."

While the political burnout of this year is real for so many people, Pruyn emphasizes that she believes White Savior is a human tale. "The real story is about two sisters, and the polarization between their political viewpoints, and how they can even begin to have a natural, familial conversation and relationship," Pruyn says. "That's the story I think many of us, I know I have, had to dance around since 2016. It is in a sense a piece of political theater, but it's more about people from disparate viewpoints who do love each other." (Scott Renshaw)

Pete Jr. @ Wiseguys
What's funny during this weird, crazy year? That's a tricky question, and one every professional comedian has had to face as they consider working current events into their comedy. For Pete Jr.—a regular at Wiseguys comedy venues and KBER radio, coming to the West Jordan Wiseguys (3763 W. Center Park Dr., wiseguyscomedycom) on Oct. 30 at 7:30 p.m., $15—the key to turning something like, say, a pandemic into comedy is all in the approach.

"You just want to ensure you're doing it in a way that's not minimizing pain people have felt, but rather one that acknowledges we're all going through a hardship together," Pete says via email. "That's one of the beautiful things about comedy—a good joke allows a room full of strangers to share a moment of pure joy."

Pete Jr. has been sharing that joy for a decade now, and finds that the COVID-19 closures of live performance venues led to a new appreciation for his job. "I didn't realize how much I needed comedy prior to it being taken away," he says. "The first day back seeing all those familiar faces, cracking jokes with the other comics, and getting laughs again from the audiences was such a sweet moment, it was borderline emotional."

As for how crowds are responding now that they're returning to shows, "One audience type are those who have a demeanor that says 'Is this ok? ... Should I feel a little guilty?' And the other are those who are like, "Look ... I just need to laugh and not be stressed anymore.'" (SR) 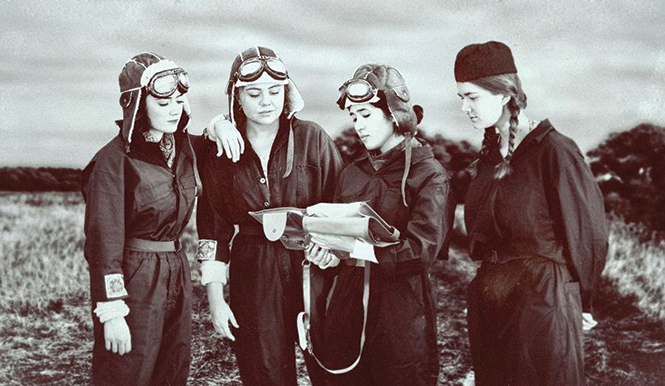 University of Utah Department of Theatre: The Night Witches
History is full of little-known tales of how people from underrepresented groups changed the world. Among those is the story of the Soviet Union's World War II-era 588th Night Bomber Regiment—an all-women group of pilots who flew under the cover of darkness, dropping bombs on the German forces every 15 minutes to keep them awake throughout the night, all while flying wood-and-canvas biplanes. Their ability to glide in with engines off and attack undetected led the Germans to think of them as riding on broomsticks, referring to the pilots as nachthexen, or "night witches."

Salt Lake City-based playwright Rachel Bublitz chronicled this fascinating historical footnote in her play The Night Witches, which debuted at the 2019 Great Salt Lake Fringe Festival directed by Alexandra Harbold, who returns to oversee this first-ever live virtual production for the University of Utah Department of Theatre. The narrative follows two rookie flyers, Nina and Vera, who have just completed their training and are about to undertake their first combat mission. Through movement, song and lyrical dialogue, The Night Witches explores brave women who took on dangerous assignments—without parachutes or even radio contact—for the preservation of their country.

The Night Witches runs through Nov. 1, including a matinee performance on Oct. 31; a post-production talk-back with the cast and creative team will follow the 7:30 p.m. Oct. 30 performance. Tickets are $2-$15, and free admission for all Utah high school students, available at theatre.utah.edu. As an additional benefit of the virtual presentation, captioning will be available for all performances. (SR)

Virtual Art + Mindfulness via Utah Museum of Fine Arts
A moment to breathe: It's hard to imagine anyone who doesn't regularly feel the need for that right now. In a year full of anxieties, we've all had to turn our lives upside-down, and even if you're fortunate enough that some of 2020's biggest upheavals haven't touched you directly, you're still probably feeling the emotional uneasiness that comes from uncertainty. What we need is dedicated time to relax and release that uneasiness—and if the process involves the contemplation of art, so much the better.

Running now through Dec. 10, every Thursday from 1 p.m. – 2 p.m., the Utah Museum of Fine Arts presents "Art + Mindfulness," an hour of traditional guided meditation that also includes a practice of the slow, thoughtful consideration of works of art ("Silvery Night" by Ralph Albert Blakelock). Sessions will be led by Charlotte Bell, a veteran certified yoga practitioner who has led classes for more than 30 years and regularly attends silent retreats. Bell also regularly contributes writing on yoga to publications including the local Catalyst, and is the author of several books on yoga and meditation, including 2007's Mindful Yoga, Mindful Life: A Guide for Everyday Practice, 2001's Yoga for Meditators and 2018's Hip-Healthy Asana. And on top of all that, this true Renaissance woman is an accomplished musician, playing oboe and English horn for Utah Symphony and for the folk ensemble Red Rock Rondo.

Classes take place in a virtual space, and are free to the public with registration at umfa.utah.edu. Give your day a needed pause that refreshes, and perhaps even enlightens. (SR)