THURSDAY 10/3
Grand Theatre Co.: Curtains
Consider Curtains a play within a play. Written by John Kander and Fred Ebb (of Chicago and Cabaret) and Rupert Holmes (who claims "The Piña Colada Song" among his many credits), it's a madcap musical and whodunit rolled into one. Set in 1959, it takes place on the opening night of a new musical titled Robbin' Hood of the Old West, which is being staged at Boston's fictitious Colonial Theatre. When the lead actress, the dubiously talented Jessica Crawford, is murdered during her curtain call, it's left to a theater-loving detective to solve the mystery, save the show and, in the process, prevent his own demise.

Granted, it's an unlikely premise, but according to Seth Miller, artistic and executive director of the Grand Theatre Co., it's a winning one as well. "Curtains is a hilarious show that is brilliantly written," Miller says via email. "With so many funny characters, our cast is having a blast playing all the different stereotypical, over-the-top theater personalities in the show. It's also full of huge dance numbers that the Grand's audience loves."

Then again, a comedy caper with music and merriment is typically a crowd-pleasing combination. In Curtains' case, it provided the impetus to bring it to Broadway, enjoy critical kudos and eventually take it to audiences worldwide.

THURSDAY 10/3
RDT: Inside Outside
Kicking off their 54th season of art in motion with Inside Outside, Salt Lake's Repertory Dance Theatre (RDT) leaves no questions why the company is still the nation's oldest and most successful repertory dance company. Building on last year's theme of diversity, RDT is celebrating a "vibrant human spirit" this season by taking viewers through a dynamic journey of Utah's heritage, geography and people. With highly technical choreography, quirky invention and rhythmic humor, the four pieces fuse many styles of dance into unexpected interpretations.

Anchored with an ode to one of the founders of modern dance, Doris Humphrey, the evening begins with "Invention"—a classic first choreographed in 1949 that explores the interconnected energy between a man and two women. Creating fresh concepts of movement from formal to contemporary styles, the show also includes pieces by Lar Lubovitch, Noa Zuk, Ohad Fishof, and Andy Noble (his Filament is pictured). "I have watched a few rehearsals, and honestly, it's really difficult to pick a favorite," RDT marketing director Stephanie Perkins says.

RDT's executive and artistic director Linda C. Smith, and her two artistic associates, Nicholas Cendese and Lynne Larson collect choreography from a wide range of artists to craft performances and determine the season's artistic theme. The dancers rehearse five days a week throughout the year to prepare for the opening. 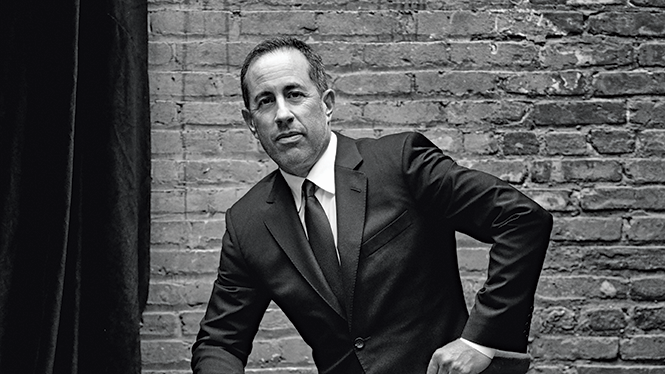 SATURDAY 10/5
Jerry Seinfeld
If Jerry Seinfeld wanted, he could simply retire from public life, confident in being carved on comedy's Mount Rushmore and with enough money that his grandchildren's grandchildren won't have to work a day of their lives. If he were bored or greedy, he could simply have some streaming service back a Brinks truck up into his driveway, requiring only that he mail in a mediocre movie performance every so often.

Yet Seinfeld continues to take his comed out on the road, doing one night stand-up performances. Why does he do it? Turns out the guy whose show put the term "master of my domain" into the lexicon, courtesy of his self-titled 1990s TV show is a master of his craft, who tinkers with a joke for up to two years until he gets it just the way he wants it.

"If I don't do a set in two weeks, I feel it," he told The New York Times Magazine in 2012. "I read an article a few years ago that said when you practice a sport a lot, you literally become a broadband: the nerve pathway in your brain contains a lot more information. As soon as you stop practicing, the pathway begins shrinking. Reading that changed my life. I used to wonder, 'Why am I doing these sets? ... Don't I know how to do this already?' The answer is no. You must keep doing it. The broadband starts to narrow the moment you stop."

Seinfeld once said on his seminal sitcom, "People don't turn down money! It's what separates us from the animals." But it's clear he's doing one-night stand-up sets for more than just the cash. (Geoff Griffin)
Jerry Seinfeld @ Abravanel Hall, 123 W. South Temple, 801-355-2787, Oct. 5, 7 p.m., sold out at press time, artsaltlake.com

SATURDAY 10/5
Sean Riley & Farshad Zadeh: A 3D-Printed 6-String Violin Experience
As technology continues to touch virtually every aspect of our lives, it's sometimes easy to forget that it opens up new opportunities for artistic creativity. Such was the case for University of Texas-Austin graduate student Sean Riley, who had become fascinated with a piece of music—composer John Adams' The Dharma at Big Sur—intended for six-string electric violin. There was just one problem: Traditional violins don't have six strings, and the rare six-string electric violins typically cost thousands of dollars. So, in conjunction with engineer Daniel Goodwin and sculptor Rebecca Milton, he chose to create one employing 3D printing technology.

"It's hard to describe how amazing it feels to hold the violin in my hands," Riley told UT News in 2018. "I can feel that it has been made. I can feel Daniel's hard work. I can feel Rebecca's hard work. I feel like I'm not even playing a violin any more. It's something different."