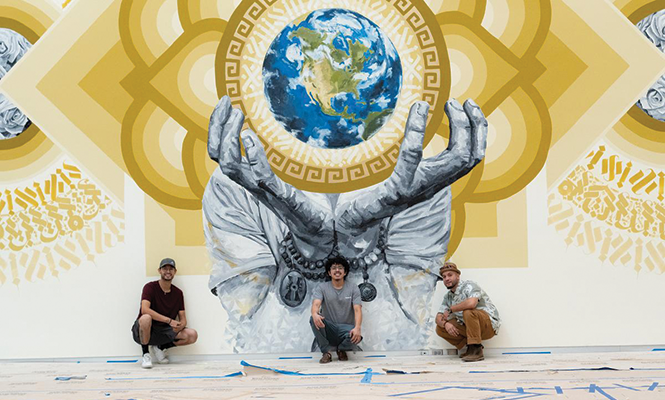 UMFA: 2020: From here on out
Murals can play a unique artistic role; often created for public places, they can serve as a flashpoint for feelings about key social and political moments, like the George Floyd mural at 800 South 300 West in Salt Lake City. At times of change and upheaval, a large-scale work of art has the ability to capture such feelings on a grand canvas, expressing not just frustration and anguish over what has taken place, but hopes for where we might go from here.

In the wake of a year unlike any other, the Utah Museum of Fine Arts reached out to the Roots Art Kollective—Miguel Galaz, Luis Novoa and Alan Ochoa (pictured)—to imagine a museum-based exhibition of mural art inspired by the events and experiences of that year. The result is 2020: From here on out, an exhibition that invited local muralists to take on that theme and bring it to the walls of UMFA, representing the massive societal shift caused by COVID, social-justice movements and a divisive election year. Participating artists like Ella Rises, Bill Louis and Vaimoana Niumeitolu were brought in by a selection committee including Artes de México en Utah, the University of Utah Department of Art and Art History, and the Utah Division of Multicultural Affairs.

2020: From here on out is currently on display at UMFA (410 Campus Center Dr.). Online ticket reservations are strongly recommended, as capacity remains limited. Masking and social distancing inside the museum building is currently recommended but not required. Visit umfa.utah.edu for operating hours, reservations and additional information. (Scott Renshaw) 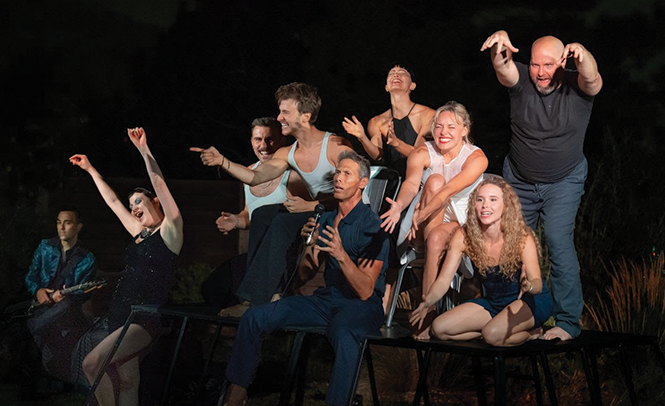 SB Dance Curbside Theater @ Daybreak
Back in the summer of 2020, when SB Dance founder and artistic director Stephen Brown was first conceiving the idea for Curbside Theater, it was an innovative way to deal with a time when there was no way of knowing how soon performing arts could get back to conventional indoor theater spaces. "I needed something pretty manageable and small," Brown told City Weekly at the time. "It had to be something I could build and figure out myself—get some plywood, some 2x4's, start nailing stuff together. ... You have to figure out the whole thing: Can it be generated off of a battery, can people see and hear, then you have social distancing."

The resulting project—which brought short dance pieces directly to people's homes and other neighborhood areas—was so wildly successful that even as many other companies return to indoor performances, SB Dance has kept Curbside Theater rolling along for a second season. Expanding from 5-8 minute household performances to 30-40 minute "block parties," the performances now welcome more people than ever, and have already played this summer in locations ranging from Holladay City Park to Boulder.

The last scheduled block party performance for the season takes place Sept. 30 in South Jordan at Daybreak North Shore (4609 Chenango Lane) at dusk (approximately 8 p.m.), featuring a lineup of some of the dozen rotating pieces in the company's repertoire. Admission is free, though donations are possible at curbsidetheater.sbdance.com, as well as the opportunity to schedule your own personal performances through October. (SR)

RDT: North Star
As Repertory Dance Theatre returns to the Rose Wagner Center for its new season, it also returns to a choreographer with whom the company has had a nearly-50-year artistic relationship. North Star features three works by celebrated choreographer Lar Lubovitch: 1976's "Marimba," 1978's "North Star" and 2018's "Something About Night."

According to artistic director Linda C. Smith, the title North Star has a particular relevance because "the north star is this guiding light. ... I had this idea of coming home to the theater, and the arts can guide us back to a place we need to find again." As for "Something About Night," Smith notes that Lubovitch suggested the more contemplative piece because "the current society is so ... noisy, in terms of everything that's going on. He said, 'I'm seeking a quieting of the mind in my work right now.'"

As the dancers work with Lubovitch himself on this choreography, Smith acknowledges a specific artistic challenge in staging repertory works. "Re-creating a dance is like a musician playing a work that has been written in the past," she says. "There's going to be a unique interpretation. Lar wants to see his choreography interpreted as he imagined it, but he's sensitive to the fact that new dancers will bring new things to the movement he's created."

North Star runs Sept. 30-Oct. 2 at the Rose Wagner Center (138 W. 300 South), 7:30 p.m. nightly. The venue will be sold only to 50% capacity, with social distancing between ticketed groups and masks required. Visit rdtutah.org for tickets and additional information. (SR) 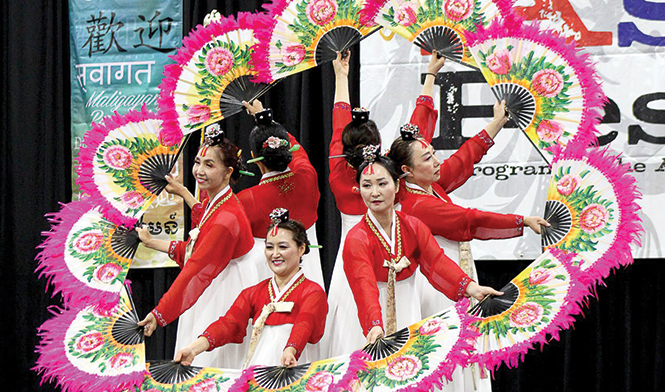 Utah Asian Festival
More than 40 years ago, the Asian Association of Utah was founded at a time when Southeast Asian refugees were being relocated from California to Utah. With seed money from the state, the AAU was formed to support those refugees in their new home, but it also helped give rise to an organization with a mission to educate the residents of Utah about the many different cultures that we tend to group under the umbrella of "Asian," and the rich traditions that characterize each one of those cultures.

Part of that mission over the years has been fulfilled by staging the annual Utah Asian Festival, which like many 2020 events moved to a virtual format for health and safety reasons. The live-and-in-person Utah Asian Festival returns this year with all of the offerings and activities that have made it such a popular destination over the years. Individual Asian culture groups will offer presentations throughout the event that showcase arts and crafts, while booths present the wide range of delicacies that characterize Asian cuisines. At 11:30 a.m., children participate in a costume parade, while 5 p.m. includes a cosplay contest. Throughout the afternoon, visitors can enjoy dance and musical performances, martial arts demonstrations and the always-popular "lion dance" with a large-scale puppet.