The company's season-opening production—which was developed in SLAC's 2018 Playwrights' Lab—tells the story of Sarah (Cassandra Stokes-Wylie), an American engineer who is working on a road in Kenya that will shape the country's future. She quickly develops a friendship with her charismatic driver, Kennedy (Patrick J. Ssenjovu), but it's only later that she begins to question that alliance, after he is thrown in prison in connection with a local election.

Anyone with an interest in works that challenge, entertain, and/or galvanize would be drawn to SLAC productions. "We're a safe haven for anyone with an open mind and a love for exciting new theater they can't see anywhere else in the state," Cynthia Fleming, SLAC's executive artistic director, says.

"It's a gripping story about two people from two completely different worlds," Fleming says about Death of a Driver. "The best way to describe the play is Hitchcockian in its twists and turns. You don't know what, or who, to believe or what to expect."

She adds, "It's a beautifully-crafted play, which masterfully manages to span the course of a friendship over 20 years—all within 80 minutes!"

Fresh from an off-Broadway premiere, the show intends to challenge audiences with the question, "What is good, anyway?" (Casey Koldewyn)

FRIDAY 9/13
Gangrene Comedy Film Festival
OK, here we go: "A-one, and a-two ..." OK, most readers likely won't recall that famous countdown recited by bandleader Lawrence Welk in the introduction to his mega-popular weekly variety show that served as a television staple from 1955-82.

Fortunately, it doesn't matter. While the Gangrene Comedy Film Festival—now in its 19th year—celebrates the spirit of the "wunnerful" Mr. Welk (comedian Bob Bedore's interpretation is pictured) with music from a 16-piece big band, we're not quite sure how he would perceive this weird, wacky collection of film shorts and live performers. The festivities have over the years included such oddities as masked lucha libre Mexican wrestlers, a motorcycle daredevil, a rock 'n' roll band that pays homage to Bigfoot, as well as spacemen, little people kissing up to Kiss and lots of live chickens.

So what's this have to do with Welk? Suffice it to say the silliness is systematic, and offered with due reverence—kind of—to an old-school showman. After all, this so-called variety show "gangster," as the organizers refer to him, was all about entertainment—and that's the intention here, even though it does tend to veer toward the weird and wacky. "The Gangrene Film Festival combines live music, stage antics and short comedy films in a laugh-a-minute event the entire family will enjoy," Gangrene spokesperson Brad Farmer says. "It's the perfect way to end the summer!"

That's charm the Gangrene Comedy Film Festival offers while taking frivolity to an extreme. And you needn't lose a limb—a-one, or a-two—to enjoy it. (Lee Zimmerman)

FRIDAY 9/13
Randy Rainbow
From viral sensation to 2019 Emmy Award nominee for Outstanding Short Form Variety Series, Randy Rainbow truly has found the pot of gold at the end of his name. Instead of getting online, fans can experience his humorous bits in person this week.

Proficient in comedy, writing and singing, Rainbow is best known for his musical political spoofs on YouTube in The Randy Rainbow Show. Between digital avenues and 350,000 subscribers on YouTube, his satire slants heavily to current news and politics, but also includes parodies of pop culture topics.

Launching his channel from an apartment in 2010 with little more than a camcorder and numerous tutorials under his trademark pink eye glasses, Rainbow broke out with the hit "Randy Rainbow is Dating Mel Gibson." In 2016, his campy takes on the election and Donald Trump increased his fan base from New York City to Hollywood, earning mainstream attention from his idols.

With more than a million subscribers on Facebook, it takes less than a minute to discover just how much a difference Rainbow's brand of humor is affecting the public's viewpoint of the current state of America. Among his Facebook comments: "I get positively giddy whenever you post a new video," Milla Windham Green says; "You have saved so many of us from utter despair. You are a national treasure!" another commenter, Jude Treleven, adds.

Through a live tour and his viral efforts, Rainbow hopes to expand even further with a weekly television show. But for now, get a ticket to see him live before he walks his first Emmys red carpet. (Colette A. Finney) 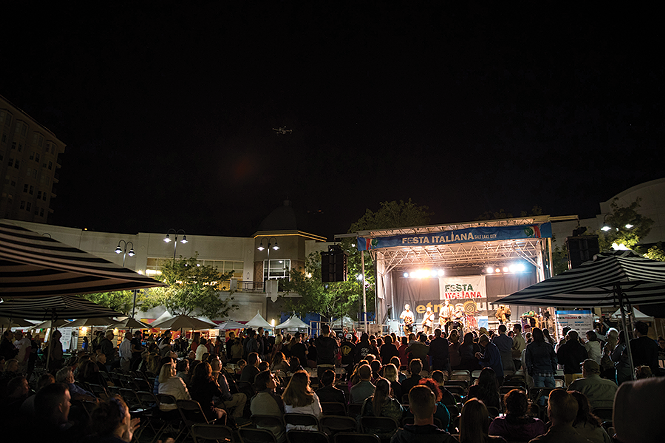 SATURDAY 9/14
Festa Italiana
In its fifth year, with an expected attendance of more than 40,000 visitors, Festa Italiana knows what attracts a crowd. Fifteen different participating restaurants, Italian cars and a full entertainment lineup are sure to entice guests to a two-day event that couples Italian and Italian-American cultures.

Activities like dancing, sampling gelato and specialty wines are available. A variety of music plays during the day including Austin Giorgio of NBC's The Voice. As always, their pasta and pizza-eating contests are held for those committed to eating as a sport.

Nick Fuoco, director of the festival, wants to usher in a new way to think about Italian traditions that have long settled into the fabric of Utah as a whole. "You get to try the flavors, the sound and bites of Italy, all over the course of a weekend," Fuoco says. "This isn't a spaghetti and meatball festival."

Festa Italiana can't be replicated without acknowledging the heritage that started the proud culture here in SLC—a community built on love and belonging, creating a festival it proudly invites you to visit. Proceeds are shared with the Catholic Community Services in support of the homeless and refugees.

It's no secret the heart of Italian culture encourages us to elevate to a blissful, more passionate self—so why is it romantic to dig in a shiny dish of penne alla vodka? Fuoco says that plate of pasta is all about having a carefree, memorable time, spent together at the table—and of course, at the festival as well.(Miacel Spotted Elk)