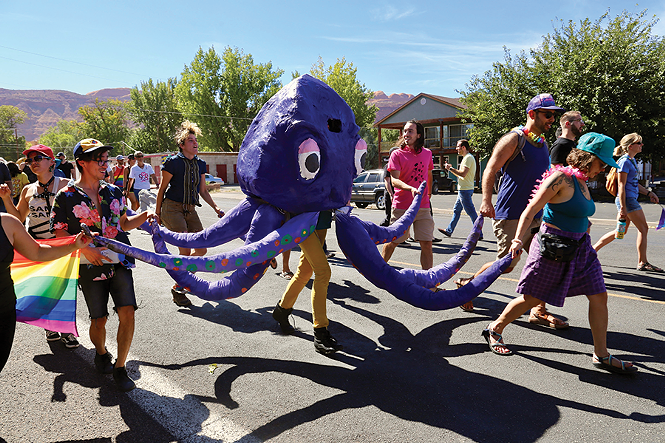 THURSDAY 9/26
Moab Pride Festival
Like the struggle for racial justice beginning in the 1960s, the efforts to promote equality based on sexual orientation continues to demand courage and sacrifice from people who have been oppressed. Sparked by the 1969 Stonewall uprising that erupted in New York City to protest continuing police harassment, the modern gay rights movement brought overdue attention to the suffering and stereotypes that forced LGBTQ people to live in the shadows because of an oppressive, intolerant and ignorant society.

That's the point of the Moab Pride Festival, a celebration of all that's been achieved in terms of bringing people out of the closet and into the American mainstream. Sponsored by Moab Pride, a nonprofit organization currently celebrating its ninth year of promoting LGBTQ rights in southeastern Utah, the festival offers four days of fun and festivities along with educational outreach. It's an opportunity to enjoy a wealth of activities, from all-ages workshops, an array of musical performances and a poetry slam to the weekend's highlights, including the Orange Party and a Saturday afternoon Visibility March and Gay-La at Swanny Park.

"Moab Pride is an opportunity to celebrate, acknowledge and empower the LGBTQ community," Marcy Till, one of the event's organizers, says via email. "Moab Pride focuses on services and programs for queer youth, embracing and supporting each adolescent for the person they exactly are. Equality, diversity, acceptance and empowerment are the values we strive to achieve"

Then again, that's part of the Moab mantra—"exist, resist and persist." After all, what other choice is there? (Lee Zimmerman)

The evening also features Mozart's "Sinfonia Concertante for Violin and Viola," featuring Viviane Hagner (pictured) and Brant Bayless. Celebrated violinist Hagner returns to Abravanel Hall amid her international touring schedule. Bayless, a violist in the Utah Symphony since 2001, has been highlighted in prior concerto and concertante performances with his home orchestra. Just as people sometimes forget that Babe Ruth was also a premiere pitcher in his younger days before becoming a slugger, Mozart first made his name as a child-prodigy violinist before becoming famous as a composer. His knowledge of the instrument can be heard in this piece.

The symphony, under the baton of Thierry Fischer, also performs another Respighi piece, The Birds, which is paired with Olivier Messiaen's The Orioles. Both strive to evoke the sounds of nature and the songs of birds. Messiaen's piece is from his 12-movement masterwork, Das Canyons Aux Etoiles, which brought the composer to Utah to experience Bryce Canyon.

The Friday, Sept. 27, program is also part of the "Back to School" series of arts in events in September being offered through the Utah Cultural Alliance, Utah Symphony, Utah Opera and University of Utah Fine Arts College. The organizations have aligned to provide a way for students to attend events with special low ticket prices. (Geoff Griffin)

FRIDAY 9/27
Escalante Canyons Art Festival
Kicking off with a "plein air" contest the week prior, the Escalante Canyons Art Festival features plenty of activities and entertainment for all ages. In its 16th year, the festival showcases working artists providing interesting demos and hands-on art projects. Programming has also been expanded to include a speaker series, two evenings of film, live music, exhibits, guided hikes and much more.

Located along state Highway 12 in the south-central part of the state, the annual festival honors the memory of American artist Everett Ruess. Traveling the deserts and canyons of the Southwest, Escalante was his last stop in 1934 before he mysteriously disappeared. Moved by the scenery, Ruess left indelible memories of his experiences through a body of art that includes poetry, drawings and woodcuts.

"We are a working art festival celebrating this region in southern Utah," festival co-director Allysia Angus says. "We hope this festival fosters a sense of importance in creativity and building community."

Accentuating the festival is the Plein Air exhibit, which displays artwork submitted by registered artists of all levels of experience completed during the competition. Typically including more than 200 entries in a variety of mediums, this year's theme is "Paint the Town" which depicts artistic interpretations of the region's natural landscapes. In addition, an arts-and-crafts fair showcases other handcrafts such as jewelry, ceramics and photography for sale.

"There is also an array of cool stuff for the kids," Angus adds. "Utah State University is bringing a mobile art truck for hands-on art action and the Mobile Planetarium Projection Dome for STEM-based educational activities." (Colette A. Finney)

SATURDAY 9/28
Vamoose Rendezvous
When the Outdoor Retailer show snubbed Utah in 2018, outdoor enthusiasts were left wondering whether there would be a similar place to serve as a hub for celebrating this state's love of all things wild. But maybe there was an option that was even more inclusive than a trade convention—a free event that could offer outdoorsy Utahns of all ages a place to get their gear on, and even bring the family.

In April of this year, City Weekly's sister publication Vamoose presented its first-ever Rendezvous, an outdoor festival that seeks to make becoming part of this state's go-out-and-get-moving culture less intimidating. Sponsored by Woodward Park City, the event includes many of the things you might expect from a free outdoor festival in Utah: vendors presenting a wide variety of gear, family-friendly activities, food trucks to calm an empty stomach, art exhibits (a photo from Bob Plumb's Annapurna is pictured) and giveaways for attendees.

But there's even more to Rendezvous than a party. Those concerned about climate change—and in particular its potential effects on the Utah ski and snowboard industry—are invited to a "Protect Our Winters" panel discussion addressing related issues. The Utah Avalanche Center plans a snow safety presentation, with crucial information for anyone considering venturing into our beautiful backcountry. And to help get you in the spirit of winter sports activities, there will be seasonal snowboard film premieres after-hours. There's no reason for anyone to feel like there isn't at least a part of Utah's great outdoors that can't be right for them—and you can start in the great outdoors of The Gateway this weekend. (Scott Renshaw)