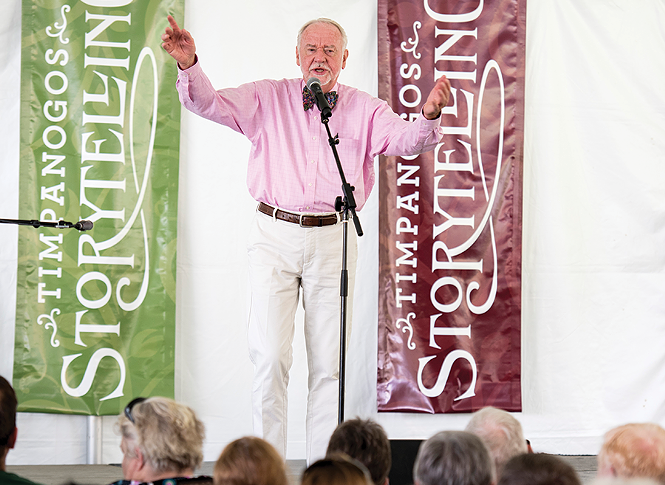 THURSDAY 9/5
Timpanogos Storytelling Conference and Festival
Talk is cheap these days, simply because we're all jabbering at once. There's plenty of preaching and pontificating going on, but way too little listening.

That's why an annual event like the Timpanogos Storytelling Conference and Festival—now in its 30th year—is something special. It offers a way to hear stories that are meaningful, enlightening, uplifting and inspiring. It's an opportunity to listen, and take stock in lessons learned, all within the soothing setting of Ashton Gardens at Thanksgiving Point, where nature provides a mellow mood for a wholly engrossing experience.

The storytellers come from places near and far to entertain. They include Simon Brooks, who arrives all the way from the U.K. to share stories about his country's ancient environs. Regular festival attendee Donald Davis (pictured), a native of North Carolina, talks about his travels with wit and whimsy. Humorist Bil Lepp displays a penchant for the absurd, segueing from everyday encounters to outrageous observations.

In addition, the conference that accompanies the festivities offers would-be storytellers an opportunity to cultivate their own communication skills and practice performance techniques that allow them to share stories of their own.

Given the fact that the event's namesake, Mount Timpanogos, is the second highest mountain in the Wasatch Range, it's little wonder this is a lofty gathering indeed. (Lee Zimmerman)

THURSDAY 9/5
Nate Bargatze: Good Problem to Have
It's a heady experience for a comedian to reach a point where he's building part of his set around people's reactions to a previous set. But that's exactly what Tennessee native Nate Bargatze was able to do on his 2019 Netflix special The Tennessee Kid, as he provided "updates" on anecdotes from his earlier half-hour special—including the status of a dangerously under-supervised roadside reptile exhibit that turned into a weird phenomenon on Trip Advisor.

But you certainly wouldn't glean from Bargatze's stage persona that success has gone to his head. His wonderfully deadpan delivery suggests that he's organizing his befuddlement with the world into jokes—including discovering the way that horses sleep, and what a wedding looks like in his country family—even as you're sitting there watching him. It takes a special talent to make his practiced bits sound spontaneous.

It takes a similar talent to venture into territory that's usually the stuff of hack comedy—like "men and women communicate differently"—and turn it into something wonderfully specific and hilarious. "Marriage fights are great," he says, "because they're always dumb. ... [My wife and I] got in a fight once over chocolate milk, we didn't talk for 24 hours. I brought chocolate milk home, and she said, 'Why did you bring chocolate milk home?' I said, 'You're supposed to have it after you work out.' She was like, 'That's not true,' and I was like, 'Well, there was a commercial on TV that probably looked into it more than you did.'" (Scott Renshaw)

FRIDAY 9/6
The Sting & Honey Co.: Happy Days
Sting & Honey visits the tragically comedic and absurdist storytelling of Samuel Beckett in their upcoming production of Happy Days. The play's plot follows what seems to be a simple story: Winnie, a middle-aged woman, carries on her daily routine and talks to her husband about happier days—all while slowly sinking into the earth. She starts the play buried up to her waist and ends up buried to her neck.

The production's director, Javen Tanner, says Happy Days is about the fading of youth and life that begins in middle age. "Her identity is disappearing, it's fading away, and she's dealing with that but she deals with it in a way that might be a little foreign to the way we tend to deal with difficult things," Tanner says. "Today, we tend to try to find something to blame, and Winnie, she's very different. She just keeps this positive attitude throughout."

While the play might deal with a seemingly morbid topic like the slow and inevitable encroachment of death, it's very much a comedy, albeit a comedy in the distinctive sensibility of Beckett—filled with clever wordplay, sexual innuendo, and, of course, the bizarre spectacle of a woman performing while surrounded by a mound of dirt. "The real way to tragedy is through comedy, through things that are funny," Tanner says. "Because the funny—it opens up our hearts and prepares us to befit and feel the depth of the tragedy." (Kylee Ehmann)

FRIDAY 9/6
Salt Lake Greek Festival
It was copper-mining and railroads that inspired a steady flow of the first Greek immigrants to head to Utah in the early 1900s. Since then, their culture has contributed to making the state a brighter place. Whether this brightness is owed to the lemon in packed dolmathes or colorful fabric flying during traditional dances, it's celebrated every year at the Greek Festival downtown.

Father Mario Giannopoulos is one of the festival organizers at the historic Holy Trinity Cathedral Greek Orthodox Church. Since those early Greek immigrants were raising their families in Salt Lake during the city's infancy, the community "is all about making a better life for us. For all of us," he says.

As one of the biggest cultural festivals in the state, it's not that much of a surprise the Greek community energizes the city's diversity. This weekend-long event plays host to a wide array of traditional music, dance and cuisine for a low admission fee that promises a high delivery of contentment. After all, high aesthetic values are instilled into their time-honored heritage.

What does Father Giannopoulos want guests to understand about Greek heritage? Philotimo—a concept that roughly translates to "love of honor." Although it encompasses many virtues one should practice for a good life, it most importantly tells us the most profound and urgent moral of all: helping each other. You can expect this wisdom to permeate the festival, but that hot gyro wrapped in foil also awaits. (Miacel Spotted Elk)