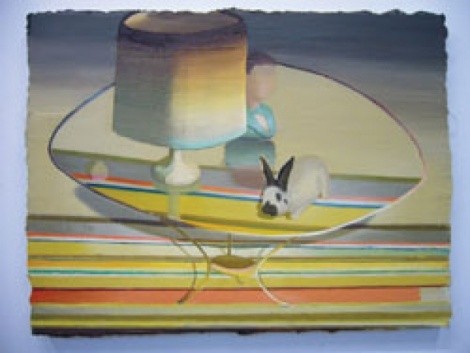 By Cara Despain
This month, Kayo Gallery hosts a two-person show with artists who live and work on opposite sides of the country: BRYSON GILL from San Francisco and RACHEL KAYE from New York. Gill’s work (above) is a nice follow-up to the recent Salt Lake Art Center Leipzig show. Gill, himself, who is originally from Salt Lake City, completed a residency in Leipzig, and the influence—especially from Weischer—appears in his work. Painters can look forward to seeing thick, delicious paint applied so liberally that the sides of the canvases are encrusted. His paintings, like the Germans’ work, is eye candy—especially for fellow artists. The strata of muted, opaque colors and strange blurred figures make for a tense and alluring atmosphere. Gill employs techniques foreign to Salt Lake City painters—and a fresh approach to making art is always worth checking out. Kaye’s drawings, which have garnered attention in New York City, are odd and rather goofy renderings of figures in candid moments, housed in fairly straightforward interiors. They are simultaneously awkward and well drafted, creating a strange feeling of almost visual adolescence for viewers. The works by the two artists complement each other well; they both address the placement of the figure in almost uncomfortable, but at the same time familiar, interiors. But they have taken it a step farther, outside the overused but expected posed-model figurative approach. The work is peculiar and exciting—something for strollers to really dig into, and viewing art from out of town is always an invaluable experience for artists. The Viewing: Central and Remote by Bryson Gill and Rachel Kaye @ Kayo Gallery, 177 E. 300 South, 450-5408. Nov. 16–Dec. 15. Artist reception Friday, Nov. 16, 6 p.m.–9 p.m. KayoGallery.com 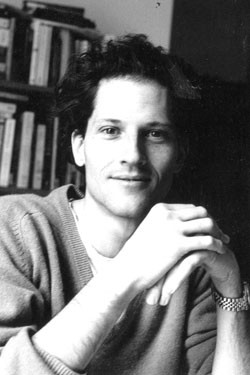 BOOKS
By Scott Renshaw
Let there be no allegations of nepotism here, folks—former City Weekly editor Ben Fulton has moved on, and his brother JOHN FULTON would be deserving of a shout-out no matter whom he was related to. At The King’s English, fiction writer Fulton—a Pushcart Prize-winner for his short stories—will be reading from his new novella/short story collection The Animal Girl, a superbly crafted series of character studies mostly connected to themes of grief.Fulton finds a clear, unsentimental voice with which to capture the actions and feelings of people who don’t know quite how to deal with loss—whether it’s the death of an introverted teenage girl’s mother in the title story, or the comatose wife standing between two potential lovers in “The Sleeping Woman,” or one’s own impending mortality as a terminally ill divorcee begins a new romantic relationship in “Hunters.” The characters’ raw pain ripples out towards those close to them, resulting in fascinating narratives of misdirected anger and thwarted love.In case one talented creative voice were not reason enough to check out this event, Fulton shares the figurative stage with Utah poet PAISLEY REKDAL—recent recipient of Arty award recognition from City Weekly readers—as she reads from her new collection The Invention of the Kaleidoscope. No relation to any City Weekly employee, past or present, that we are aware of. John Fulton and Paisley Rekdal @ The King’s English, 1511 S. 1500 East, 484-9100. Thursday, Nov. 15, 7 p.m. 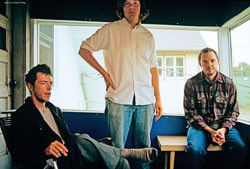 CONCERT
By Jamie Gadette
If FOG’s Ditherer brings to mind Low’s most rocking moments, it could be more than just a passing coincidence. Revered Low noisemakers Mimi Parker and Alan Sparhawk make an appearance on the former one-man show’s latest album, but so do experimental bedfellows Andrew Bird, Why?, Dosh and Phil Elverum. In truth, Fog (left) is everything and nothing you’ve heard before. The artist who started on turntables draws on a treasure chest of electronic blips and bangs, keys that drone and hum, wiry post-punk rhythms, subtle psychedelic freak-outs, soaring folk choruses and inflection that is at times reminiscent of Bob Dylan or Tom Petty. It’s a divisive work—arguably Fog’s most accessible release to date. Critics have called out their departure from form, questioning the decision to invoke then mutate traditional musical templates when the old formula broke all the rules. Perhaps, they should take a cue from one of Ditherer’s sardonic lines: “We’re in this together, son; your beef is mine.”Decide for yourself tonight when Fog teams up with Portland’s brilliant hell-raisers OLD TIME RELIJUN. Propelled by Arrington de Dionyso’s jittery howl and a sweet stand-up bass, the group (whose revolving roster once featured Elverum—see above) delivers primal, sexually charged sounds of sweaty surrender—a perfect match for Salt Lake City openers Vile Blue Shades. The percussive-heavy collective recently released Triple Threat, three previously recorded works tucked conveniently into one cool package. Check out the review on p. 56. And, of course, check them out with Fog and Old Time Relijun Friday. Fog (with Old Time Relijun) @ Urban Lounge, 241 S. 500 East, Friday, Nov. 16, 10 p.m. Tickets: 24Tix.com

HERE & NOW
Other New Happenings This Week
BRUCE BAUM The walrus-mustached comedian—a 25-year veteran of the standing-in-front-of-a-brick-wall wars, once seen as himself on The Simpsons—brings his shtick to West Valley. Wiseguys Comedy Café, 3500 S. 2200 West, 463-2909, Nov. 15-18, 9 p.m. WiseguysComedy.com