Plan-B Theatre Company is, you know, a theater company. So why did it take until the sixth installment of the annual AND THE BANNED PLAYED ON fund-raiser—a one-night-only evening of performances and history drawing attention to banned artistic works—to focus on plays and musicals? “We wanted to do it for a long time,” says Plan-B’s artistic director, Jerry Rapier. “It just took figuring out the mechanics of how to make it work.”

Those “mechanics” include negotiating the schedules of dozens of volunteer participants, including co-hosts Bill Allred and Doug Fabrizio, all five of Salt Lake City’s five most recent mayors, and media personalities including our own editor Holly Mullen introducing the context for 10 banned stage productions. Actors and singers follow those introductions with performances of scenes (including a 10-minute youth-performed distillation of Romeo and Juliet) and songs (from West Side Story, Miss Saigon and more) from the works themselves.

Six years on—and in no danger of running out of banned material—Banned still offers not merely entertainment, but food for thought about what we consider “acceptable” and why. Was it any less acceptable for a world’s fair to pull a planned West Side Story because it painted a less-than-perfect portrait of American life than for schools to ban West Side Story productions because it might be a stereotypical portrayal of Puerto Rican immigrants? Figuring out upon which side of an argument you fall provides its own uniquely interesting mechanics.

CONCERTBy Geoff Griffin
This is the time of year for Major League Baseball’s All-Star Game and rock tours with all-star rosters. In either case, it’s tough to fill out a lineup card. Who should bat cleanup? Do you prefer the brief but blinding Sandy Koufax-like brilliance of THE POLICE, or the long-term, Hank Aaron-style career achievements of ELVIS COSTELLO?

The Police released five albums from 1978 to 1983, loaded with hits like “Roxanne” and “Every Breath You Take” that have become pop-music classics. Costello never reached the same neighborhood of popularity, but the breadth and volume of his discography is astounding. Since 1977, he’s put out some 34 LPs (not counting reissues and greatest-hits compilations) covering every genre from country to classical with partnerships from Burt Bacharach to Anne Sofie Von Otter, while playing everything from guitar to glockenspiel.

So who gets the nod as the headliner? In this case it’s the Sting-Summers-Copeland trio based on the simple law of supply and demand. After their Usana concert, The Police will have just 12 concerts and 18 days left as a band before playing what they swear is their final concert. As for the guy who was born Declan McManus, he’s a mere 53-years-old, and probably has at least 15 albums and three more genres in him.

So send Elvis up to the plate first—but only if he’s guaranteed 90 minutes, and the headliners promise not to play anything from Sting’s solo career. 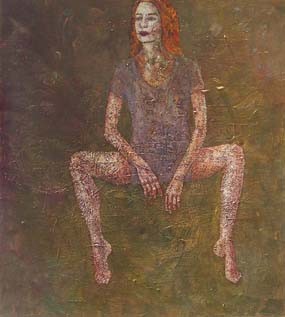 VISUAL ARTSBy Jacob Stringer
After a seven-year stint working as a full-time artist in sunny Los Angeles—which included a showing at the amazing J. Paul Getty Museum—JOHN SPROUL returned to Salt Lake City to be able to work in “a city with a lot of potential, with a lot to offer for growth in the art community and in cultural diversity.”

Fair enough. Luckily, regardless of geographical location, Sproul continues to churn out acrylics that may best be described as nonportrait portraiture (“FLA” is pictured). He speaks of using his chosen medium to find and lose the subject figure, “layer upon layer until the sincerity of the work is found … My choice in subjects is instinctual, but in retrospect they seem to be images of people that do not exhibit one or two emotions strongly but a complexity and deep-seated set of emotions. It is also about body language, which has a semi-large part in my work—the body as an archetype. Aesthetically, I tend to work with subjects that are neutral to sexuality, gender, age and time. I am really working towards the universality of the individual.”

Sproul’s treatment of the individual—even in his sketches that are backed by the same thick colored layers of paint, often seemingly glazed over with a hauntingly ghostly film—in which he purposefully blurs any distinctive lines of personality and trait, achieves exactly that, morphing individual portraiture into portrayals of a common humanity.

101 THINGS TO DO WITH GELATIN Coauthors Jennifer Adams and Melissa Barlow discuss and sign their book of recipes and other creative gelatinous notions. The King’s English Bookshop, 1511 S. 1500 East, 484-9100, July 19, 2 p.m. KingsEnglish.Booksense.com