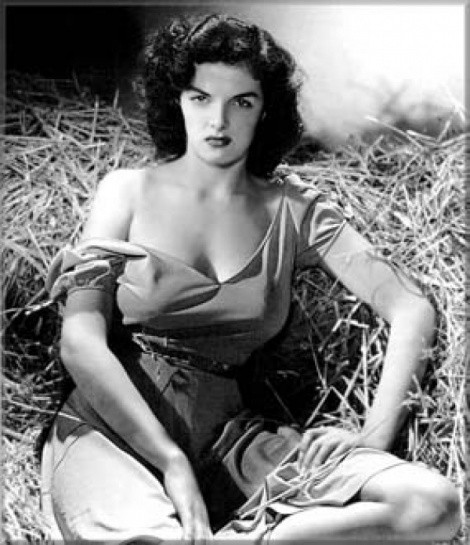 FILM
By Jacob Stringer
If they saw it on the street, international film festivals the world over probably would turn away and pretend they never even saw B.I.F.F. coming. The BICKNELL INTERNATIONAL FILM FESTIVAL is truly the goofy red-headed stepchild of the world film circuit—assuming it even registers on the radar at all.

Luckily for us, it’s held annually here in backwater Utah—approximately eight miles northwest of Torrey, 30 miles southeast of Koosharem and 55 miles due north of Escalante as the crow flies. If you’re still confused, GoogleMap the directions, because it’s worth finding.

Not only does B.I.F.F. boast such random goings-on as a swap meet and the world’s fastest parade (racing by at a breakneck pace of 55 mph), its B-movie programming leaves absolutely nothing to be desired. This year’s lineup—organized under the “Wild Wild Worst: Bad ‘B’ Westerns” theme—includes the Howard Hughes/Jane Russell (pictured) cinematic classic The Outlaw (1946) and Tom Laughlin’s The Master Gunfighter (1975). As a sort of bright, shiny diminutive cherry on top, B.I.F.F. will screen one of the best Westerns of all time: The Terror of Tiny Town. Filmed with all the 1930s traditional Western schtick in mind—think good guys garbed in white, bad guys bedecked in black, sunsets and serenades—the entire cast is made up of little people galloping upon their trusty Shetland steeds, “Little Guys With Big Guns!”

CONCERT
By Tawnya Cazier
There exists a small but elite group of female musical artists who have truly set themselves apart. More often than not, these women are known for their passion, for their unflinching assessments of past mistakes, and for wearing their pain and social causes on their sleeves. LUCINDA WILLIAMS is no exception. The three-time Grammy winner has written such hit songs as, “Passionate Kisses,” which was recorded by Mary Chapin Carpenter, and earned the distinction as “America’s Best Songwriter” by Time magazine.

But Williams also belts out her own tunes, in addition to those by other songwriters. Her rough-hewn voice has always lent itself to lyrics filled with longing, loss and love. However, you might see a slightly different side of Williams this time around. When a song is called “Honeybee,” it surely must be some sort of ballad—only there’s nothing balladlike about it as Williams pounds out Anna Laube’s hard rock power anthem. Sure, it’s a song about love, but it’s angrily happy, a little dirty, and fully embraces that passion one never hopes to lose in a relationship.

Last year, while performing in Salt Lake City at Kingsbury Hall, she explained that her management team expressed concern that she might lose her “edge,” since finding love. But knowing Williams and seeing the intensity with which she plays, such suggestions seem ludicrous. She’s still a kick-ass chick, ferocious musician and exorbitantly talented songwriter. Her show? It’ll be nothing short of that.

BOOKS
By Eric D. Snider
When viewing one of famed architect Frank Lloyd Wright’s many brilliant designs, it’s only natural to think about the man himself. Who was he? Where did he get his ideas? Who was he boinking on the side?

At least one of those questions is answered in Loving Frank, NANCY HORAN’s historical novel based on the true story of Wright’s lengthy love affair with Mamah Borthwick Cheney in the early 1900s. Both were married to other people at the time; in fact, it was when the Cheneys hired Wright to design their house that the two met, leading to a scandalous affair worthy of the most tawdry soap opera.

The book, which draws as much as possible on the known facts of the relationship, is told from Cheney’s point of view, painting her as a progressive, free-thinking woman who grappled with the various labels that society wanted to put on her. Cheney comes off more selfish than sympathetic, and Wright seems like the same old “I’m an Artist, so I can do whatever I want” type, which doesn’t engender a lot of support for his behavior. But Horan—who will speak about the book in Salt Lake City this week—provides writing that is crisp and engaging, and her attention to period detail makes for a fascinating read. What’s more, since the story is not well known outside of Frank Lloyd Wright fan clubs, the odds are good that you’ll be surprised by the way it turns out.

KSL DAYS OF ’47 PARADE Wave those flags and suck in great heaping lungfuls of pride for your pioneer heritage. Begins at Main St. and South Temple, July 24, 9 a.m. DaysOf47.com