Once again, we’re at the threshold of summer, when gallery stroll becomes even more enjoyable due to the increased possibility of actual pedestrian art-walking. And May means it’s time again for the annual 300 PLATES fund-raiser and exhibition at Art Access. With 82 participating artists including Anthony Siciliano (whose contribution is pictured), all confined to the same surface—a 10-inch by 11-inch recycled litho plate—you’re bound to find something to indulge in.Although I enjoyed much of the work, there were a few worth particular mention. Jason Jones was a less-familiar name for me, but his plates certainly dazzled. His self-description says it best, as he cites Japanese pop culture, children’s illustration/animation and botanical illustration as influences. His plates are painted, poppy yet muted, and graphically fun. The thick, waxy, scratched sort of awkward images from Zane Lancaster are increasingly exciting. They are limited in palette, thoughtful in medium and aggressive but classy with line. I can’t get enough! And of course, Sri Whipple continues to amaze. It doesn’t matter how much of his work you see, it just gets more exquisite—especially in terms of technical approach. His plates reveal a slight change of palette for him, and a figural abstraction (which really is too boring and academic a description for his type of drafting) that translates well to the small format. So get a plateful. It’s worthwhile, and it’s great art—and the best part is you can cruise it all in one stop.300 Plates @ Art Access/VSA arts of Utah, 230 S. 500 West #125, 328-0703, through June 13.

Have you seen those adolescents busking on Manhattan street corners, playing the rhythmic hell out of plastic five-gallon buckets with a simple pair of drumsticks? That, in short, is the essence driving the mad beats of Broadway Across America’s award-winning Stomp.The eight-member company uses just about anything and everything as the tools of their trade; most “instruments” are found objects like garbage cans and their surprisingly versatile lids. Push brooms, matchboxes, sink basins and lead pipes all get yanked into banging action, augmented with the likes of Plexiglass, basketballs, street signs, Zippo lighters, etc.—really, anything that will emit some sort of pitched percussive sound.Garbed as industrial dockworkers, the cast expertly moves through choreography with few verbal utterances, beside the occasional grunt, umph or yelp. The mic’ed floors pick up and amplify every little brush stroke, toe tap or finger triplet deftly splayed out on the side of a bucket—not to mention the weighty steel-toed workman’s boots providing a constant solid back beat.Besides the occasional rare alteration to the show (including rotating water numbers), Stomp has changed little from its original version launched 17 years ago. Which is a good thing, seeing that the show relies heavily on its unique aesthetic: the idea that you’re watching a random group of urbanites crossing paths somewhere in the Bowery, a Harlem alley or Brooklyn side street and stopping for a moment, just to stomp out a few good beats.Stomp @ Capitol Theatre, 50 W. 200 South, 355-2787, June 3-8. ArtTix.org 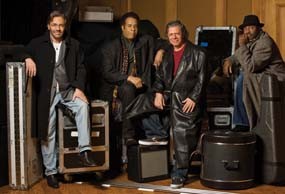 MUSIC
By Geoff Griffin
Jazz fusion, as a blend of jazz and pop/rock music, can either bring together the best of both worlds (vintage Miles Davis), or combine all that is boring in both genres (Kenny G and Chuck Mangione). All-star lineups can result in an exciting blend of elevated performance (the 1992 Olympic Dream Team) or devolve into a mere collection of overinflated egos with no interest in working together (pretty much any NBA All-Star game or NFL Pro Bowl). Therefore, putting together an all-star lineup to play jazz fusion can mean either inspiration or disaster.In the case of the band RETURN TO FOREVER, it turned out to be the former. The lineup of keyboardist Chick Corea, bassist Stanley Clarke, guitarist Al Di Meola and drummer Lenny White—each a musician with his own distinguished career—brought many rock & roll fans into the jazz world and vice-versa during the 1970s. Various forms of the band, which at one time or another included more than a dozen other musicians besides the aforementioned four, recorded seven LPs between 1972 and ’77 before a breakup, which was rumored to be about not creative differences, but membership in the Church of Scientology.Following a brief 1983 reunion, the fab four of Corea, Clarke, Di Meola and White are touring together again after having watched their music influence a variety of genres (including being sampled by Dr. Dre) over the past 25 years. And you can be there.Return to Forever @ Kingsbury Hall, 1395 E. Presidents Circle, 581-7100, Wednesday, June 4, 7:30 p.m. KingsburyHall.org.