Bad Shakespeare: The bad-ass cast of The Expendables sells it—if only just barely. 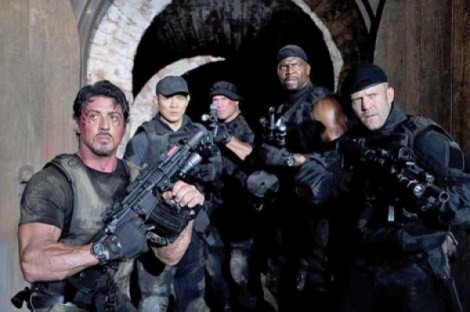 “Bad Shakespeare,” one badass notes with a sad shake of his head. It’s the perfect phrase for the manly male melodrama that passes for character here, and the cheesy revelations that pass for plot. It is the fact that co-writer/director Sylvester Stallone recognizes this himself that is The Expendables’ saving grace. But just barely.

The winking self-awareness of everyone involved is another tiny saving grace. But just barely.

You almost can’t hate a movie where badasses get to hang around in between badass missions in a totally badass tattoo parlor/motorcycle garage and listen to Mickey Rourke reminisce about that badass time when they were up in Bosnia. Sure, it’s bad Shakespeare, but Rourke sells it—if only just barely.