The Fifth Estate can't make its real-world drama worth remembering 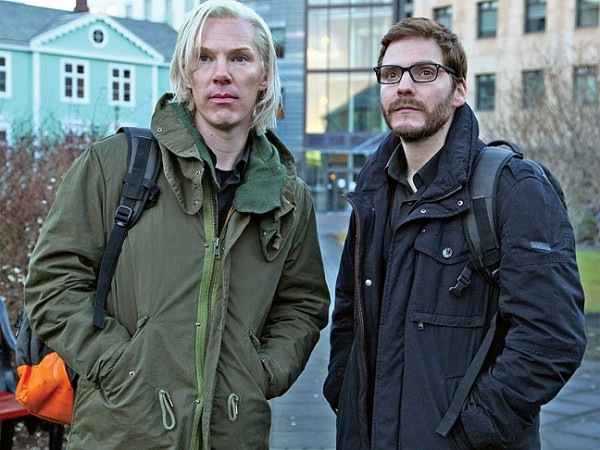 Every year, during the Sundance Film Festival, it becomes kind of a defense mechanism for me to write as much as I can about a movie as soon as I’ve seen it; too many movies packed into such a condensed time frame make it easy to forget what you want to say once you’re already watching the next movie. Yet I can’t remember the same phenomenon happening quite so quickly during the non-Sundance part of the year as it did with The Fifth Estate. Within hours, I was beginning to doubt whether I’d ever actually seen the movie at all.

In part, that may be because of how much The Fifth Estate starts to feel like another movie about online pioneers—and the comparison does the new movie no favors. Director Bill Condon (Kinsey) and screenwriter Josh Singer—adapting a pair of nonfiction books—tell the story of the infamous whistle-blowing website WikiLeaks as the contentious relationship between two key early contributors. And as such, it mostly feels like a weak-tea knockoff of The Social Network.

One of those two key contributors is, of course, Julian Assange (Benedict Cumberbatch), the Australian-born onetime hacker who founds WikiLeaks as a way for people to get secret but important information out into the world privately and securely. The other is Daniel Berg (Daniel BrÃ¼hl), a programmer who connects with Assange early on, and is attracted to the charismatic Assange’s mission to take investigative journalism to the next digital-age step. Condon grabs onto this idea in an opening-credits montage—zipping through the history of human communication from cave paintings to Guttenberg to satellites—that promises a lively exploration of one of the fundamental ethical questions of the 21st century: How much faster are the technological possibilities of what we can do outpacing a careful consideration of what we should do?

But that’s not really where The Fifth Estate goes, at least in a way that can manage to splice its two sources together deftly. Mostly, it tracks Berg’s gradual disillusionment with Assange’s obsessive control over the WikiLeaks operation, which also eventually—and tediously—interferes in Berg’s relationship with his girlfriend (Alicia Vikander). Again, Condon grabs on to a potentially interesting visual metaphor for the illusion Assange perpetuates of WikiLeaks as a sprawling, thriving organization—we frequently see a cavernous room full of desks, often occupied by nobody but Assange.

Yet despite all the bizarre biographical details about Assange’s childhood, The Fifth Estate chooses to keep him at an enigmatic distance. While both Cumberbatch and BrÃ¼hl turn in reasonably solid performances, the interaction between Assange and Berg simply feels like a less-effective duplication of the dynamic between The Social Network’s Mark Zuckerberg and Eduardo Saverin: the ruthless savant versus the disillusioned everyman.

Much of the climactic action focuses on the buildup to the controversial release of classified U.S. government documents provided by Bradley/Chelsea Manning, and here The Fifth Estate comes closest to its potential. While we watch the WikiLeaks crew and their traditional-media partners clash over the rules of journalism that should apply to publishing this sensitive information, we also see government officials—most notably a State Department operative played by Laura Linney—scrambling to deal with the potential fallout of damaged alliances and exposed informants. Yet even as we watch one such informant (Alexander Siddig) and his family flee for their lives, Condon rarely seems as interested in the real-world impacts of Assange’s crusading sense that all information must be free. It’s hard not to shake the sense that The Fifth Estate makes Assange’s personal betrayal of Berg somehow more important than shaking the foundations of geopolitics.

Cinema often struggles with the modern problem of people typing furiously at computer keyboards during pivotal dramatic moments, so it’s understandable when the filmmakers want to make the human relationship between its two main characters the focus. But these guys are too bland and indistinct with their girlfriend dramas and warring philosophies—and if your story isn’t finding a way to make a bleached-blond megalomaniac into a memorable figure, something has gone dreadfully awry. There’s nothing compelling enough in The Fifth Estate to make you forget you’ve seen a story like this before, or even to make you remember you saw this one.