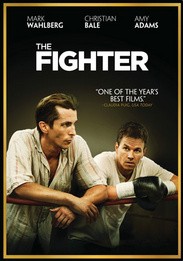 The Fighter
Mark Wahlberg, Christian Bale and Amy Adams star in the true story of a small-town boxer who, against all odds, his horrible family, junkie brother and bad hairstyle decisions, wins a historic title bout. (Paramount)

Hereafter
A psychic (Matt Damon) connects with a French journalist and a London schoolboy on the other side of the world; whispering, weepy New-Ageism and disaster scenes ensue. Directed by Clint “Get Off My Lawn” Eastwood? (Warner Bros.)

Sharktopus
A hybrid shark/octopus developed in a military lab conveniently located next to a beach resort gets loose! And only Eric Roberts can stop the ensuing bikini-babe buffet! Syfy’s greatest pre-Mega Python vs. Gatoroid film. (Anchor Bay)

Sugar Boxx
A female journalist goes undercover at Sugar State women’s penitentiary to investigate wrongful imprisonment and brutality, only to wind up in a grindhouse sexploitation flick with Kitten Natividad and Tura Satana! (SugarBoxx.com)

The Switch
A single NYC woman (Jennifer Aniston, as always) is accidentally impregnated via sperm-donor cup by her platonic pal (Jason Bateman), and we all learn valuable lessons about love, friendship and the scourge of Jennifer Aniston. (Lionsgate)