For most of my 50-plus years on this earth, most of the things I loved—comic books, genre movies, theme parks, role-playing games—made me a weirdo. You found support in whatever pockets you could, but the world seemed to be built for those a bit less interested in fantasy, a bit less imaginative, a bit less ... geeky.

In 2019, the geeks have practically inherited the earth, from the omnipresence of the digital world to the box-office behemoths based on super-heroes and galaxies far, far away. In Utah, the annual FanX convention has become one of the state's largest events—not surprising, considering the 2014 designation by the real estate website Estately that Utah was the "nerdiest state in America." We can't get enough of fantastical worlds; love of those worlds can practically define who we are.

City Weekly's first-ever Geek Issue is a celebration of the people and organizations that make Utah such a distinctive haven for those with a geek sensibility. Within you'll find an interview with FanX's founder, profiles of people who have turned their nerdy loves into livelihoods and personal stories about letting the geek flag fly, along with a look at the many different local gatherings of fan communities. There's no more need to feel like a weirdo. Your tribe welcomes you.

The panelists of Geekshow Podcast feel the impact of creating a true community.
By Scott Renshaw 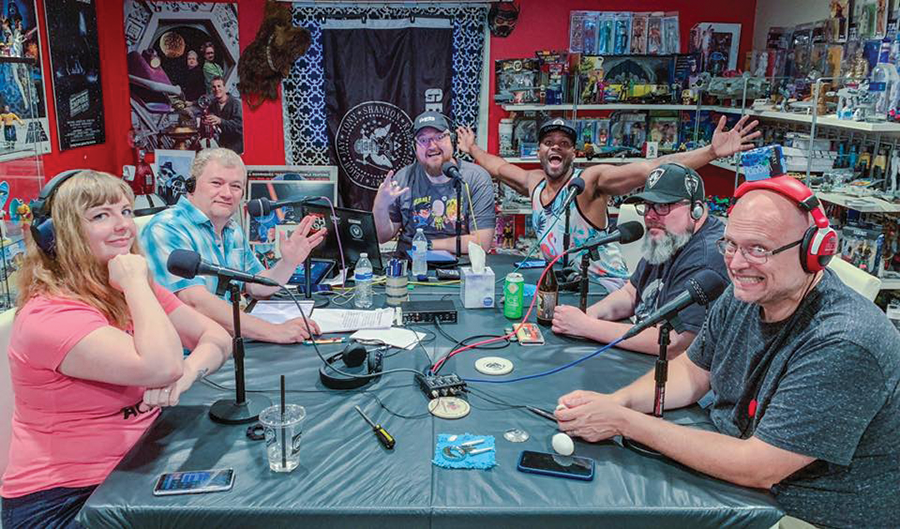 In a basement recording studio, a group of friends gathers on a Saturday afternoon in July to nerd out, and to record that nerding out for posterity—and for the entertainment of listeners. It's the home of X96 radio personality Kerry Jackson, who serves as a sort of ringmaster for the crew of Geekshow Podcast, a celebration of fandoms in all their many forms that has become a fixture not just in Utah, but nationally and internationally.

If you close your eyes and try to picture the room where such a geeky bull session might take place, you'll probably be visualizing something pretty close to Jackson's basement. Shelves on every wall are filled with action figures and models, many (if not most) still in original packaging; any space not occupied by those shelves is for movie posters. It's practically a museum of all the pop-culture stuff people have been—until fairly recently—mocked for loving.

Around the recording table, Jackson gathers with his fellow panelists—Shannon Barnson, Leigh George Kade, Rebecca Frost and producer "Quad T" Tony Eccles—to deal with preliminary business before they get down to recording; comedian Jay Whittaker, one of the regular Geekshow crew, was unable to make it due to flight delays returning from gigs in Texas. They'll record three episodes on that day, and the order in which they might choose to record them is complicated by the fact that the San Diego Comic-Con is going on at that very moment, and they might want to include breaking news. You can't be a Geekshow Podcast without acknowledging the information coming out of America's largest pop-culture gathering—and after all, being part of a bigger geek community is what this thing is all about. It's practically a family. And it's a family that, like all families, sometimes has to deal with heartbreak.

The origins of Geekshow Podcast trace back 20 years, to an informal gathering that would occasionally take place during X96's morning Radio From Hell show, where Jackson is one-third of the regular host team with Bill Allred and Gina Barberi. On some days when Allred was on vacation or otherwise not present for the show, Jackson would invite several of his friends onto Radio From Hell—including Barnson, TV critic Scott Pierce and film critic Jeff Vice—to turn the broadcast into a conversation about comic books, movies, TV, games and the like.

"We'd have different rotating people now and then, [Kade] would occasionally come on when he could," Jackson recalls. "Gina loved it because she got to leave early. And we'd talk about the shit we talked about in my basement, but on the radio."

As geek culture rose in visibility in the early 2000s with popular Spider-Man and X-Men movies and the launch of the Marvel Cinematic Universe, Jackson approached X96's marketing department to talk about the possibility of turning their occasional morning conversation into a more regular radio show. While management wasn't interested, someone Jackson describes as "a kid in the IT department" made an alternate suggestion. "He said, 'You should do a podcast,'" Jackson says. "I said, 'What's a podcast? And when is it on?'"

With a tiny budget, Jackson and company decided to give it a try. "I didn't think anything of it, was just happy to be hanging out with my friends and talking about my favorite shit," he says. "About a year later, we took [download numbers] to management , and asked, 'Is this something the company could sell and make money off?' They said, 'This podcast was such a great idea that we had. I'm glad you took that idea and ran with it.' But they kind of half-assed it, didn't give us any more budget. And radio salespeople ... had to learn to sell it on their own. It just kind of languished while we were owned by Simmons [Media, X96's parent company before a sale to Broadway Media]. I don't think they really grasped what they had until it was too late."

Back in the basement, the Geekshow crew rattles through their regular range of arcane topics—a Netflix show starring Stranger Things' David Harbour titled Frankenstein's Monster's Monster Frankenstein; comic-book publisher apps—but are willing to talk about their own origins as geeks and the feeling of isolation they experienced. Jackson recalls growing up in small-town Utah, and getting beat up for wearing his Star Trek T-shirt to school. Finding even one friend with whom you could share those passions was a big deal. For Jackson, it was the one non-Mormon kid in his small-town Utah neighborhood in the 1970s, with whom he could bond "over Groucho Marx, Mad Magazine and Star Trek;" Kade remembers scoping out a house on his paper route that had a Star Wars AT-AT walker in the yard, "to see if there was a cool kid my age who lived there. And sure enough, there was, and we were best friends."

"You had to seek these people out," Jackson says. "There was no internet. You'd just casually see someone doodling the Enterprise or an X-wing in their notebook, and you'd go, 'Oh yeah, I know the code.'"

For many geeks in their Gen X age cohort, it took the opening of local comic-book stores to create a place where these far-flung people could gather and find friendships. "It used to be if you wanted to have that big nerdy conversation," Barnson says, "it was at the comic-book store. That was my first inkling of a geek community."

"Those were the cathedrals," Kade adds, "and church was every Wednesday [when new comics were released]."

Then came the internet, which all the panelists acknowledge has been both blessing and curse for fandom as a wider community. "We have this double-edged sword of the internet," Kade says, "where it brought us all together, and I can talk with friends in Taipei or Australia about this thing that we love. At the same time, it can be very toxic. You get this group that decides they hate Rey in Star Wars, so they rally and have this huge clarion call to lash out against this thing. That's why we're seeing this resurgence of the physical geek community. If I go to a convention, or a store that celebrates this thing that I like, I'm going to find that sense of community and that physical interaction that we don't have in the digital world."

And celebrating the things that unite them in joy is what the Geekshow crew is all about, not "gatekeeping" and deciding which fans are "real fans" and which shows or movies are the only ones worth caring about. "There's a guy I butt heads with constantly over whether Star Wars is better than Star Trek, and I'm just like, 'Dude, just be glad they're there,'" Kade says. "For that matter, let's be happy that Babylon 5 is there, let's be happy that Farscape is there. These aren't shows that I watch, but I'm so happy they're there. Because if that makes you happy, then we should celebrate those things for a few minutes."

That sense of celebration, and the authentic friendship between the panelists, are part of what has given the Geekshow Podcast a feeling of family. When the Geekshow family has been hurting, the more far-flung parts of their community—which Jackson says includes regular listeners from Scotland to Japan—have rallied to their support.

In 2015, Geekshow suffered a loss when founding panelist Jeff Vice died of cardiac arrest after a massive asthma attack at the age of 48. Then, in June of this year, panelist Jimmy Martin—who had been Vice's co-host on the locally-produced Big Movie Mouth-Off—died at the age of 37 after an accident in his home. The Geekshow Podcast Facebook page was filled with expressions of love and support, all for someone the majority of them had never met, but felt like he was part of their tribe.

"I've had personal tragedy that they've come together and helped me out with," Barnson says of the Geekshow fans. "Five years ago, within less than a year, my mom, my dad and my brother all died—and that was the same year that Jeff Vice died. I had to take care of all of the expenses. They came together and helped me out. And I just want to thank everyone again. I hope people know how much love and support we get from people."

Listeners of the show also sent financial support after Martin's passing. "We've covered a memorial here, we've covered a celebration here, we covered funeral costs, and a service for Jimmy's family in Atlanta," Kade says. "And that was all covered by fans, and there was enough money left over that we're able to donate to a good organization [SpyHop] that would have meant a lot to Jimmy."

Jackson reads a letter from a listener, following up on an interaction the listener had with them three years earlier. The writer recalled reaching out to the Geekshow crew after the death of her brother from cancer: "I remember Leigh saying that some day I'd be able to share Star Wars with my then 6-month-old son, and that I would receive so much joy in watching him play with Uncle Ryan's toys. I just wanted you to know that today was that day. He found Uncle Ryan's lightsaber and proceeded to do lightsaber battles all over the house. I had to share this with you guys. Thanks for what you do, and know that you are loved." Jackson's voice breaks with emotion as he reads.

"In my mind, when I feel like I'm going to get overwhelmed with sadness about something that we lose," Kade says, "I remember that it's the things we share with those people that keeps them with us. It's the movies we shared together, the TV shows we got together to watch."

"That's what makes the family," Eccles adds. "Maybe they are blood relations, probably not. It doesn't matter. We all come together over the things that we love, and create experiences together."