A look at some of cinema history's most iconic misfits, dorks and weirdos.
By David Riedel

Back in sixth grade, some punk-ass called me the best dressed nerd in school. That was when to be a nerd was to be a pariah, someone with tape on his glasses, a pocket protector—all the standard clichés. I didn't have those. My big sin was being the only boy that semester who made honor roll.

You tell me whether I'm a nerd: I dig Star Trek in two of its iterations. I can take or leave Star Wars. I don't read comics, I've read zero Harry Potter books, and I only see Marvel Cinematic Universe movies because I'm paid to (I admit to enjoying The Winter Soldier).

Personal credentials aside, however, I know what makes a big-screen nerd, whether they fit the aesthetic profile or not. One thing the nerds below have in common: They're all actually pretty cool.

James Stewart in most of his filmography
Jimmy Stewart might seem like easy pickins—and he is! By God, look at all the movies in which he played a dweeb: Mr. Smith Goes to Washington, The Philadelphia Story, the strangely-beloved It's a Wonderful Life. And don't forget the coup de grâce, Alfred Hitchcock's Rear Window, in which his character, Scotty, spends the bulk of the picture spying on maybe-murderer Perry Mason instead of hopping into bed with his girlfriend, Lisa, who's played by Grace Kelly. Grace Kelly. God, Jimmy, you truly were a dork.

Pat Hitchcock in Strangers on a Train
Hitch's daughter turns in a gem of a performance as audience surrogate Barbara, working out the reasons the police will think Farley Granger's Guy whacked his wife so he could marry his girlfriend. Plus, she arguably helps catch the killer by hiring Guy a taxi—I'm not going to bother explaining the plot; plot summaries are for nerds—and the real killer (Robert Walker) goes into a trance while looking at her and almost kills someone else. It's nutty! Her best line: "I still think it would be wonderful to have a man love you so much he'd kill for you." Oh, Babs, you kook!

Julius Kelp and Sherman Klump from The Nutty Professor(s)
Who's the better goofus professor? Jerry Lewis as Kelp in the original or Eddie Murphy as Klump in the remake? It's a matter of personal taste, as both actors play markedly different characters (it's Lewis). Anyway, you know the story: The professor has to prevent his creation from destroying him. Watch both back-to-back on a Saturday night and argue with friends and family over which is more fun.

Spock
No matter who plays him—Leonard Nimoy, Zachary Quinto or Ethan Peck—Spock is the brain to beat. Who else would know the key to saving Earth is saving humpback whales? Plus, he has the integrity to back up the brains. This is the guy who sacrificed himself to save the ship—to save us all. The Vulcan Science Academy's loss is the universe's gain.

Eddie Deezen in just about every appearance
He's a computer techie who spars verbally with Maury Chaykin in WarGames and a doofus who battles a murphy bed in Million Dollar Mystery, but Deezen might be best remembered for playing Eugene in Grease (and Grease 2, the poor bastard). Out of all the actors in this piece, he's played a bozo the most, and he's been doing it for decades. If anyone deserves a lifetime achievement award for dorkitude, it's Deezen.

Rick Moranis as Louis in Ghostbusters, Bob McKenzie, and as goobers in Honey I Shrunk the Kids, Little Shop of Horrors and Parenthood
Aside from Deezen, Moranis might have the most social misfits under his belt of any actor. Louis in Ghostbusters is perhaps his most famous role, but with all these parts, it's hard to quantify which is the most iconic. Personally, I'm all about the MacKenzie brothers, with Louis a close second. But some people love Little Shop of Horrors. (Some people are stupid.) Moranis pretty much left show business behind in the late '90s to raise his family, the schlemiel. 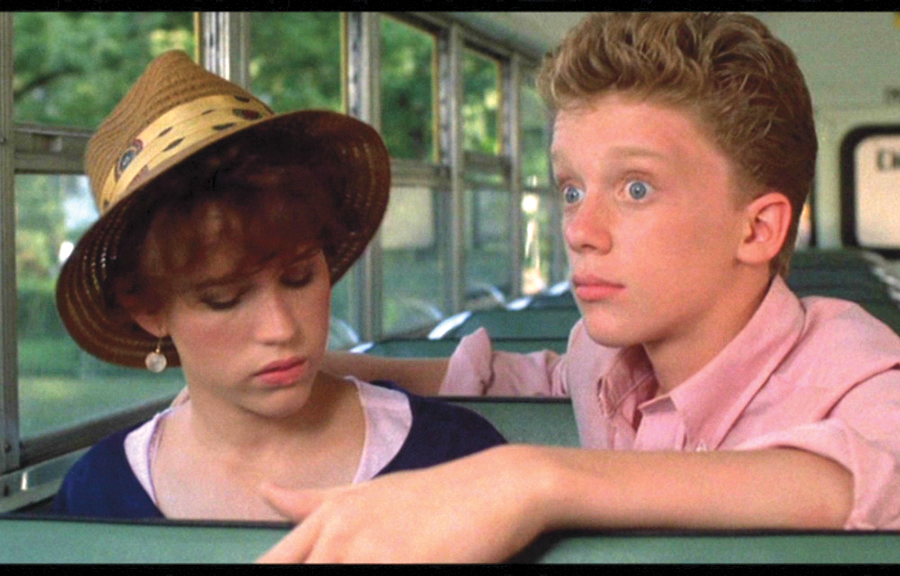 Hall played the quintessential high-school egghead. His character Farmer Ted in Sixteen Candles is billed as "The Geek" in the closing credits. He came into his own in The Breakfast Club, and then toyed with coolness (and misogyny) in Weird Science. His weirdo career makeover as a high school heartthrob in Johnny Be Good backfired, and he's never really recovered, though he was great as the TV reporter in The Dark Knight and he pops up in the occasional prestige flick (Foxcatcher).

Tracy Flick and Elle Woods from Election and Legally Blonde
Reese Witherspoon portrayed these polar-opposites—one an overachieving high-school student with a mother who says passively horrible things to her, the other a secret nerd who's smarter than everyone else but initially afraid to show it—with such ease it makes one wonder why she had to settle for an Oscar for Walk the Line. (It's because comedies, generally, don't get the respect dramas do at awards time. Eh.) Both movies are a hoot, though Election is a little barbed for date night.

McLovin (and his marginally cooler friends Seth and Evan) in Superbad
Ah, to be young and dorky and lookin' to get laid. There was a decade when these guys wouldn't have stood a chance (the 1980s), but the times, they a-changed, and in Superbad, these young men find young women who like them back. McLovin (Christopher Mintz-Plasse), possibly the biggest on-screen dink since Deezen, has the craziest time, shooting off guns with cops and bedding the cool chick. In real life, Mintz-Plasse no longer resembles a nerd; check out his arms in Neighbors 2: Sorority Rising.

Molly and Amy from Booksmart
These two bookworms and best friends get into their dream colleges by studying their asses off, then learn all the non-nerds got into great schools, too. That leads Molly (Beanie Feldstein) and Amy (Kaitlyn Dever) down a path of booze, drugs, arrest and driving really fuckin' fast before high school graduation. Booksmart didn't burn up the box office this summer (it was released opposite Aladdin), but if there's any justice, streaming and video will launch Molly and Amy into the know-it-all Hall of Fame.