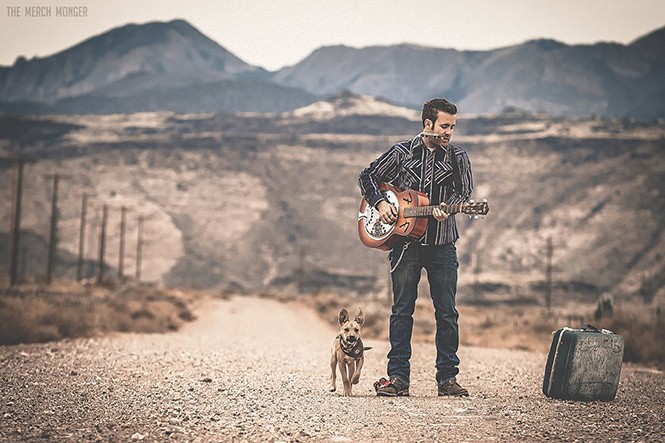 It's hard to believe anyone could have a story like Tom Bennett's—at least nowadays, when it's trendy to adopt the image of a dusty, itinerant troubadour with a gritty past. Bennett, however, is the genuine article—and his tale is a whopper.

His debut album, The Man Who Shook the Trail of the Devil's Hounds (Sweet Salt, 2015), starts with an introduction from his friend, local poet Martin Willcocks, who talks of Bennett's Georgia upbringing; his Mormon mission and flirtation with LDS fundamentalism; and the time he spent train-hopping and dealing drugs, followed by redemption as a community activist. "He was given his first harmonica by an old woman from West Virginia when he was just 9 years old," Willcocks says on the recording. "Tom's great-grandfather, Roy Ferguson, performed at the Grand Ole Opry, and later died in a Holiday Inn parking lot. Tom is carrying on the family tradition."

Willcocks' English accent and occupation ring with authority and credibility, but then he steps aside for Bennett, who performs the title track. It's 58 seconds of handclaps and gospel vox that you'd never expect from a fresh-faced dude who's part Georgia cracker, part Mormon boy. Then Bennett, on the next track, "Satan, I'm Knockin' on Your Door," plays slow, low blues, talking about battles between good and evil, then strums and howls and blows on his harmonica. Here, you know he's no fake, and every ensuing song reaffirms that faith.

Over the phone, Bennett's even easier to believe, with his own warm, Southern accent, residual Mormon politeness and a confidence honed through an itinerant lifestyle where he's done good and bad alike while trying to survive. Although he could easily leave out details that would clutter his fantastic tale—like how he sang with emo/screamo bands before becoming an Americana artist—he doesn't, because it happened, and it led him to where he is today. Just like when he was arrested for selling cocaine—a far greater sin, for which he's atoned: "I never touched it again," he says.

While he came to Utah as a missionary in 2000, it was during that time that he became involved with fundamentalist Mormonism. "I was supposed to help start a united order, and this guy wanted me to marry both of his daughters," Bennett says. "It got really, really intense, because some people thought I was a prophet." He wound up having to meet with Elder L. Tom Perry of the Quorum of the Twelve Apostles, and was almost excommunicated. "But they didn't excommunicate me because I didn't claim to be a prophet," he says. "It was other people saying it. But it kinda freaked me out."

Immediately after his two-year mission, Bennett retreated to Georgia, but decided to return to Utah in 2003. That's when he got involved in the local music scene—playing with bands like Murrieta, who opened for My Chemical Romance—and eventually got arrested in 2006. "I kinda went off the deep end for a while there," he says. Fortunately, he didn't have a prior criminal record, and he was able to get the charges expunged so he could work as a director at a local Boys & Girls Club a couple years later. "I wanted to try to find a way to benefit the community," he says.

In 2013, Bennett began working with the homeless community, and started playing guitar and writing songs. Many of his early tracks are inspired by his encounters with the homeless, particularly how he could relate to their stories. Soon after picking up a guitar, he befriended successful local musicians Jordan Matthew Young and Tony Holiday, who invited him along on a U.S. tour, teaching him a thing or two as he honed his songwriting skills and one-man band, where he plays guitar, drums and harmonica. In spite of the overwhelmingly positive reaction from audiences, Bennett returned from the tour looking for a steady job. "But this homeless man, who was a friend of mine, said, 'No, man. You should just be brave and keep touring,'" he says.

So Bennett bought a GMC Yukon, put a bed in the back, and hit the road. When he was home, he busked on the streets of downtown SLC. This turned into a gig playing in the lobby of the Peery Hotel, and later became a local singer-songwriter night called A Good Ole Time, which eventually moved to Zest. He formed the label Sweet Salt Records, releasing his debut album followed by Live in Colorado (2016) and a three-song EP, I Am Everywhere, this past February.

After getting married and moving to St. George last year, Bennett started performing at a local bakery in FLDS-dominated Colorado City, Ariz., where a young polygamist boy suggested that Bennett put on the town's first-ever music festival. It took some work, since the town hadn't even drafted laws or permits regarding such events, but they were receptive to the idea, and it was a success. "We did it totally for free," he says. "We had six bands come from all over the Western United States, USA Today did two three-page articles on it, and 1,000 people showed up." He plans to do it again next May.

Until then, he'll keep playing. Even before the festival, Bennett had worked up to around 300 gigs a year. Speaking of which, his break is over. "I don't mean to cut you off," he says, "but they're waiting for me to come on stage right now."