The Greatest Movie Ever Sold 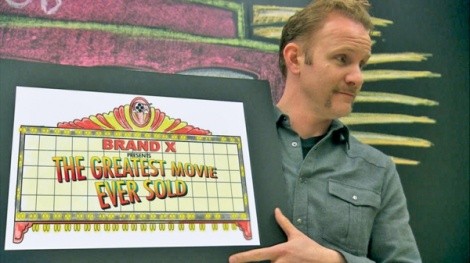 During The Greatest Movie Ever Sold—Morgan Spurlock’s documentary about his quest to finance the $1.5 million budget for the movie entirely through product placement—one marketing expert defines the Super Size Me filmmaker’s “brand” as a combination of “mindful and playful.” The idea is that his puckish personality comes with some insight attached. But, if that’s the case, there’s not enough of that insight on display here.

That’s because the film itself is composed almost entirely of Spurlock’s quest to sell companies on being associated with his movie, then finding places to promote the movie itself. He sets up meetings with potential partners and shows them concepts for how the product would be integrated into the film, allowing a bit of room for their generally nonplussed initial reactions.

Sure, there are more than a few fun gags as we watch Spurlock gleefully prostitute himself, blurring logos of the products not savvy enough to hitch their wagon to his and inserting blatant commercials in the center of everything. And there are some intriguing side trips, like addressing how the city of Sao Paolo, Brazil, instituted a complete ban on billboards and outdoor advertisement.

The only irony, however, seems to be what viewers bring to the experience, and our presumption that Spurlock must somehow be poking fun at the process, even though he’ll be contractually obligated not to show any of his corporate partners in a negative light. The few interviews with naysayers, and a segment devoted to financially strapped school districts turning to marketing dollars to stay afloat, provide at least a modicum of satirical context, yet it doesn’t really feel as though Spurlock finds anything new or meaningful to say about whether ubiquitous marketing is good, bad or indifferent. As amusing as his film often is, he ends up getting to have his cake, and get paid for eating it in front of us, too.