The Green Hornet's action is out-clevered by comedy—a small price to pay for satisfying superhero yuks. 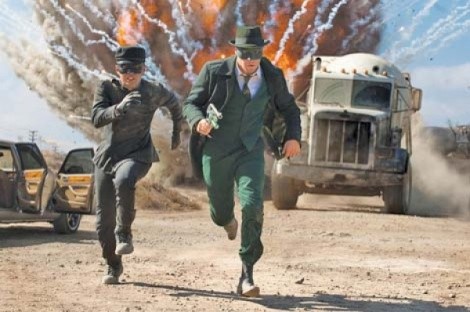 Serious devotees of The Green Hornet—he of the dark, grim 1930s radio show—are going to howl. The rest of us can enjoy The Green Hornet, Seth Rogen-style, as an aggressively goofy spoof of the modern dark, grim vigilante drama. This Britt Reid doesn’t kick ass; he is an ass.

Daddy took Britt’s faux Superman doll and ripped its head off once, long ago. But now, the spoiled brat and sudden heir to Daddy’s fortune is playing superhero to his nerdy heart’s content. What’s most intriguing about this sly spin on the masked-avenger story might be how Rogen (who stars as Reid and co-wrote the script with Evan Goldberg) doesn’t let Reid get away with being an overgrown adolescent. Nope, Reid’s incompetence at the superhero role he fancies for himself is rewarded with physical beatings; his stupidity is bowled over by the genius and competence of his sidekick Kato (Jay Chou); and his imagined savoir faire is scoffed at by Lenore Case (Cameron Diaz), the inadvertent brains behind Reid’s vigilante hobby.

Reid is an unexpectedly amusing twist on the superhero—and Kato an even more entertaining twist on the sidekick; Chou is deadpan hilarious—but the villains don’t escape getting sent up. James Franco snarks his way through a cameo in which his wannabe criminal overlord confronts crime boss Chudnofsky (Inglourious Basterds’ Christoph Waltz), which lends Chudnofsky an air of insecurity that we’re not used to seeing in comic-book villains.

The homoerotic subtext that usually dogs a story about two guys who wear masks and get physical together becomes an overt running joke, while the PR angle on how heroes and villains alike sell themselves in a media-saturated world explicitly drives the plot and fuels the humor. If director Michel Gondry’s action—which is often muddled and frequently ridiculous—is out-clevered by the comedy, it’s a small price to pay for some satisfying superhero yuks, which we haven’t had in a long while.