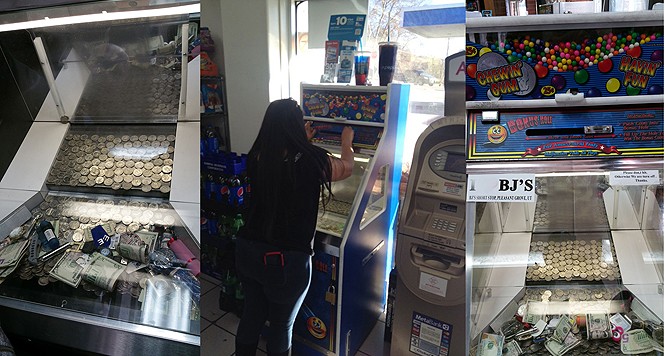 Anyone who's waltzed through a casino has likely seen the game where a player drops a quarter in, and, with a little luck, it gets pushed onto a metal shelf full of quarters, perhaps spilling a handful of lucre off the shelf, out of the machine and into the player's waiting hands.

If you haven't seen coin-pusher machines in Nevada or Atlantic City, N.J., you might soon be seeing more of these machines in Utah gas stations. A new company began marketing these diversions here despite the Beehive State's strict anti-gambling laws. The Utah machines differ from actual gambling machines in that they offer a guarantee: You might not win with every quarter, but you will always get a bubble-gum ball for every two bits deposited.

For some, this innovation could be construed as sidestepping the law—in a way that not only allows gambling, but essentially opens it up to anyone, regardless of age. Little Suzie could legally blow all her lunch money on such a machine—but, even if she didn't win any cash, she would at least walk away with a fistful of candy.

These coin-pushers are in use in at least two Utah gas stations. Both—a Chevron at 1508 E. Highway 89 in Layton and one right in the heart of Happy Valley at BJ's Short Stop, 130 W. Center St. in Pleasant Grove—are under the same ownership. Both prominently feature the vending machines near their entrances. Recently, in the Layton location, a woman intently pumped quarters into a machine, while a young man next to her watched and scooped up the gumballs that were dispensed.

In both locations, besides the gumball/quarter dispenser, there are also machines that allow individuals to put money in a video sweepstakes offering gift certificates as prizes.

Rick Patel, manager of BJ's Short Stop in Pleasant Grove, explains that coin-pushers operate under the law based on what representatives of Intermountain Vending—the company that provides the machines—told him.

Patel says gift-certificate vending machines are no different from sweepstakes games offered by fast-food chains that let customers enter to win prizes by purchasing meals. People who put money into the machines have that money credited toward gift certificates, even if they don't win the sweepstakes.

"It's like the McDonald's game when you buy a burger—same thing when you put a dollar in the machine. You get one pin number, and you can go to the website and use it to buy anything you want," Patel says.

As for the other game, a coin-pusheremblazoned with a smiling cartoon gumball and the words "Chewin' Gum, Havin' Fun," Patel says it's not a gambling device, because it also vends gumballs.

Patel says a salesman from Intermountain Vending made it clear that coin-pushers had been cleared by law enforcement. He says he even had police visit his establishment and inspect the machine—after which the police left and have not brought the issue up again. Patel also says a company salesman told him there are hundreds of these machines in locations across the state. Without these assurances, he says, he never would have agreed to have the machines in his business.

The legal question is not exactly clear, especially since many government authorities only recently learned of the these coin-pusher machines from City Weekly. Missy Larsen, spokeswoman for the Utah Attorney General's Office, says the agency has received no complaints of the machines, and neither did the Davis County Attorney's Office.

Davis County Attorney Troy Rawlings says that his first reaction is that the gumball machine appears to be in conflict with state law, though he also suspects such a case might be difficult to prosecute.

Steve Garside, deputy attorney for Layton City, agrees, noting that without further investigation, it would be hard to know whether the gumball machine was breaking the law or merely skirting it.

Garside says these situations aren't always clear-cut. For example, certain organizations in other cities offer people the chance to win money at bingo in exchange for buying spaghetti dinners, he says.

Determining the legality of the gumball machine would come down to whether the coin-pusher was primarily about getting a sugary treat or wagering on the opportunity to win back more than you put in the slot—which meets the definition of gambling. It could mean the owner of such an establishment could face a class B misdemeanor for allowing gambling devices at a place of business.

"You have to evaluate what is the underlying purpose, what is the activity, and then go from there," Garside says. "It's not always a black-and-white thing."

Stan Graham, legal adviser to Intermountain Vending, scoffs at the reaction some have had to the gumball machines.

"Oh my gosh! Call the culture police," Graham says in mock indignation. "It's comical," he says.

The state's gambling statute contains a key exclusion, Graham says, referring to language in the state code that states "a lawful business transaction" is not gambling.

Graham points out that, if not for that crucial line in the state code, many activities would be considered gambling—from depositing money in a savings account to taking out a loan or buying stocks. Such "business transactions" are protected by law, since many business deals cannot guarantee the outcome of an investment.

"There are all kinds of things you don't consider that are legal games of chance. It's all chance," Graham says. "And the return you're going to get in exchange for your premium is up in the air."

Those transactions, he stresses, are just as lawful as buying a gumball.