The Head & The Heart

Seattle band are "liked," a lot 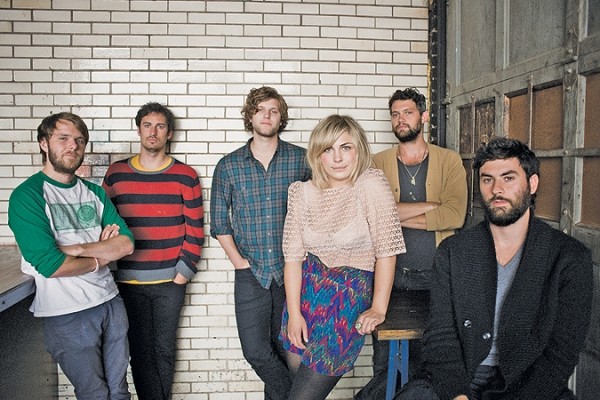 Charity Rose Thielen challenged Brinton Jones to a friendly bet. Jones and the rest of Salt Lake City’s The Devil Whale were recording Teeth in 2010 at Studio Litho in Seattle, where vocalist/violinist Thielen and a few other The Head & The Heart members were contributing backup vocals (frontman Josiah Johnson can be heard on “Magic Numbers,” for instance). Thielen was perusing both bands’ Facebook pages.

“I think they won,” Fish says with a laugh.

But for The Head & The Heart, it’s not about competition—quite the opposite. Whether it’s writing songs or touring with other bands, a spirit of collaboration reigns supreme.

The two bands have been connected for quite some time: The Devil Whale opened for The Head & The Heart in Seattle at the first concert featuring the latter band’s current lineup. “That was the first time that people came to see us in large numbers,” says The Head & The Heart drummer Tyler Williams during a phone interview. “I’m sure [The Devil Whale] helped with that a lot.”

“It was actually a really important show,” Williams continues. “I felt like we were stagnant before that, because we had been writing [their self-titled debut, which would later be remastered and distributed by Sub Pop Records] for so long. That night, we let the floodgates open.” And the floodgates have remained open, it seems.

The Devil Whale was the first band to tour with The Head & The Heart, joining in on a West Coast and then an East Coast tour in 2011. “At all of their shows, the fans are so into it, and so are they,” Fish says. “They were usually at the side of the stage or up front when we played, and they would join us all the time. It’s like you’re in their band. We’d go out and sing ‘Lost in My Mind’ with them, too.”

That collective spirit is what Williams and his band strives for. “We’ve been out with bands of all different kinds. Sometimes you get those bands that don’t give a shit if you’re there or not,” he says. “That doesn’t feel very good, especially if it’s those people that you might’ve looked up to.” He hopes this won’t be the case when The Head & The Heart open for The Shins at the Red Butte Garden season opener this week.

A welcoming vibe and collaboration is at the core of The Head & The Heart’s ethos—and disagreements among bandmates aren’t unwelcome. They are a band in every sense of the word, from the well-documented fledgling days when they met during the weekly open-mic nights at Seattle’s Conor Byrne Pub to their current collaborative songwriting methods—everyone writes. When the folk-pop ensemble began, musicians would sort of filter in and out, and, although they have now solidified a six-person lineup, the band crafts tunes in smaller writing groups, Williams says.

That diversity is appreciated, even if things get a little tense. “We all came from different places; we all have different viewpoints. This is what I’ve realized: You might not like these people all of the time; they might get on your nerves,” Williams says. “In bands past, people want to be friends all the time, and I think that stifles creativity.”

So that has aided in crafting new material, although the subject matter has veered from stories of traveling and moving to become more autobiographical: “So far, there’s more, well, there’s a lot more love songs, I guess, and songs about people you wish you could spend more time with—because we’re touring a lot,” Williams says, noting that the material is still in the early stages. “It’s becoming a more personal record.”

The band’s subject matter pulls between the head and the heart, literally. That notion is depicted in an Austin City Limits poster for the band where a female apparition on a dirt road has her featureless head illuminated; yet that symbol seems odd. With their lyrical content and constant collaboration among band members and other bands, like The Devil Whale, “the heart” always seems to win over “the head.”

“Yeah, well, we don’t overthink anything,” Williams says. “And we’re certainly not doing anything disingenuous.”