The Hobbit: An Unexpected Journey

Too much heaviness on simple quest 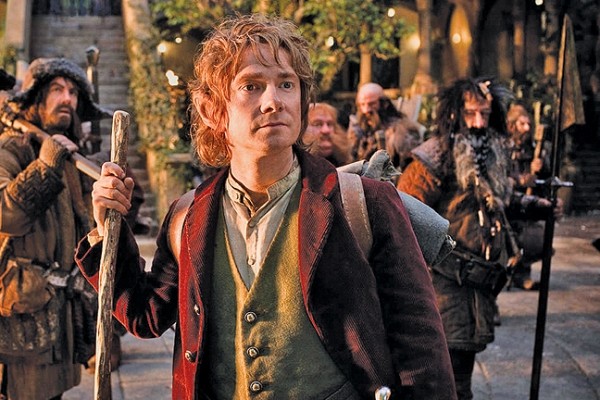 “All good stories deserve embellishment,” says the wizard Gandalf (Ian McKellen) to Bilbo Baggins (Martin Freeman) in The Hobbit: An Unexpected Journey. And he says it with a twinkle, as though he somehow knew it would wind up being quoted back by snarky critics who wouldn’t be able to resist.


After all, the “embellishment” has been the focus of attention where The Hobbit has been concerned, from the expansion of J.R.R. Tolkien’s pre-Lord of the Rings book first to two movies and then to three, to the decision to shoot the movies in a new 48-frames-per-second format. Where you might expect simple excitement about the return of director Peter Jackson to Middle Earth after his wildly successful, Oscar-winning Lord of the Rings trilogy, instead, the chatter has been about how hard this whole project seems to be working to live up to mammoth expectations. George Lucas might very well nod in wry understanding.


So, it’s immediately concerning that An Unexpected Journey opens with a framing sequence involving the elderly Bilbo (Ian Holm) and Frodo (Elijah Wood) in advance of the birthday party featured in The Fellowship of the Ring. Bilbo is working on the memoir of his own adventure 60 years earlier—when Gandalf recruited him to join a company of dwarves-in-exile, led by their leader, Thorin (Richard Armitage), to recapture their home city from a dragon—but that prologue feels designed almost entirely to remind you of this movie’s lineage; where we’re going begins to feel less important than where we’ve been.


That sense continues through many of the other familiar faces from The Lord of the Rings films who show up for cameos, most notably Elrond (Hugo Weaving), Galadriel (Cate Blanchett) and Saruman (Christopher Lee). They join Gandalf for a conference in the elf city of Rivendell to discuss how this isn’t all just about going off to fight a dragon, but is somehow connected to the creeping threat of Sauron, talked about here in ominous He-Who-Must-Not-Be-Named tones. Something striking at the very balance of good and evil awaits—you know, something that’s going to happen in those other movies.


The notable exception to the awkwardly included established characters is the tragic Gollum, once again portrayed by motion-capture genius Andy Serkis. Bilbo’s encounter with Gollum is a crucial one that actually comes from Tolkien’s book—it’s the means by which Bilbo comes to acquire the One Ring—and Jackson smartly allows Serkis’ performance, along with the satisfyingly fidgety work of Freeman as Bilbo, to stay front and center. It’s a memorable scene not merely because it’s a reminder of how astonishing Serkis was throughout The Lord of the Rings, but because it’s almost relaxed in its mix of playfulness and creepiness.


What becomes clear as An Unexpected Journey creeps through its 160 minutes is how unusual the tone of that scene is, because Jackson generally doesn’t trust this movie to be just a rousing fantasy adventure. There are magnificent action sequences throughout the movie—from an encounter with a trio of trolls, to a war between walking mountains, to a dizzying underground confrontation between Bilbo’s party and an army of goblins—as well-crafted as anything in The Lord of the Rings. But that story also carried the weight of its world’s fate, and rich material about the nature of heroism and heroic myths. The burden of Middle-Earth-shaking, character-defining consequence—plus a dwarf diaspora—rests awkwardly on the simple quest narrative of The Hobbit, like a wire hanger trying to support a full suit of armor.


Plenty of The Hobbit’s detractors are bound to focus on its sheer volume, and the notion that Jackson is pulling a stunt akin to fiddling with the margins and font size of a term paper to reach a pre-determined target length. And it’s a fair criticism, especially when Bilbo’s initial meeting with the dwarves turns into a feature-length farcical set piece all on its own. Yet, while the pacing is occasionally poky, the same was also true at times of The Lord of the Rings. The difference is that The Lord of the Rings was an epic; with The Hobbit, Peter Jackson is forcing it to become one. There’s “embellishment,” and then there’s feeling so attached to this story’s cinematic legacy that you can’t focus on telling the tale that’s right in front of you.

THE HOBBIT: AN UNEXPECTED JOURNEY