The Hobbit: The Desolation of Smaug

Continuing the Lord of the ... oops, The Hobbit 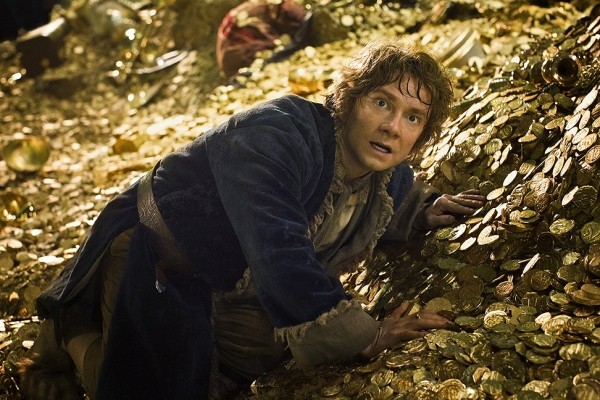 When last we left the band of adventurers in Peter Jackson’s epic Middle-Earth fantasy, their group was in tatters. Boromir and Gandalf were dead; Merry and Pippin had been kidnapped by orcs; Aragorn, Legolas and Gimli were off to rescue them; and Frodo and Sam were …

No, wait a minute. That wasn’t The Hobbit. But you can’t blame me for confusing The Hobbit films with Jackson’s Lord of the Rings films. He almost seems to be counting on it.

That much was clear in last year’s first Hobbit chapter, An Unexpected Journey, as Jackson added an extended prologue and plenty of familiar Lord of the Rings faces to establish a connection with his revered original trilogy. He continues in that same direction with The Desolation of Smaug, seeming so determined to duplicate what worked before that he doesn’t know how to allow this story to be its own distinct thing.

So, this story actually picks up with the company of dwarves led by exiled heir to the throne Thorin Oakenshield (Richard Armitage)—and also including the hobbit Bilbo Baggins (Martin Freeman) and wizard Gandalf (Ian McKellen)—fleeing from a relentless band of orcs. They have limited time to reach the secret door that will allow them access to the Lonely Mountain—the realm of the dwarves once upon a time, now ruled by the dragon Smaug—to retrieve the Arkenstone that Thorin requires to re-claim his throne. That makes it something of a problem when their journey is delayed every time they’re detained—by spiders in the forest, by the elves of Mirkwood and by the human inhabitants of Laketown.

It’s easy to embrace the action side of The Desolation of Smaug, since few contemporary filmmakers are a match for Peter Jackson when it comes to making use of geography in a big action sequence. The dwarves’ battle with the forest spiders is a snappy little appetizer for the centerpiece sequence, in which Thorin’s company tries to escape from the Mirkwood elves—and from those aforementioned marauding orcs—in barrels down a rushing river. Jackson brilliantly maintains momentum in this battle-cum-flume-ride for longer than seems possible, bringing creative new props into play and following one bouncing barrelful of dwarf on a hilarious pinball across the riverbanks that shows you elves really know how to make a sturdy barrel.

That sequence is also noteworthy for giving plenty of face time to Legolas (Orlando Bloom), a character Tolkien purists will note never explicitly appears in The Hobbit. Of course, there’s a certain pleasure to watching this familiar character dart and slide his way across a battlefield in the way that made him so much fun to watch in the Lord of the Rings films, yet there’s also a level on which his appearance feels forced—just as it feels forced every time Gandalf keeps reminding us that these events are somehow connected to the eventual rise of Sauron. When Jackson and his co-writers introduce the new elf character Tauriel (Evangeline Lilly), the problem isn’t simply that she’s “non-canon,” or that it’s a bald-faced attempt to get a little feminine energy into such a dude-heavy story. It’s that the film seems to be trying so hard to create a grand romantic triangle—this time involving Tauriel, Legolas and handsome dwarf Kili (Aiden Turner)—to match the Arwen/Aragorn/Eowyn dynamic of Lord of the Rings.

Everything builds, as our subtitle would suggest, to the eventual confrontation between Bilbo, the dwarves and Smaug (voiced by Benedict Cumberbatch), and the big fire-breather is certainly an impressive creation. More significantly, the sequences in the Lonely Mountain—including the magnificent image of a solid-gold-plated Smaug—are satisfying because they provide one of the few occasions when this feels simply like a movie version of The Hobbit, rather than a grand attempt to re-capture lightning in a bottle. Every cut away from the mountain sequences to events taking place elsewhere—Gandalf hunting down Sauron, or orcs attacking Laketown—re-emphasizes that Jackson doesn’t trust the simple appeal of this particular story.

If The Hobbit is beginning to feel exhausting, it’s not so much because the movies are long; it’s from the strain of watching a movie devote so much energy to being something it’s not.

THE HOBBIT: THE DESOLATION OF SMAUG