Locals The Hollering Pines find poetry in the everyday on debut 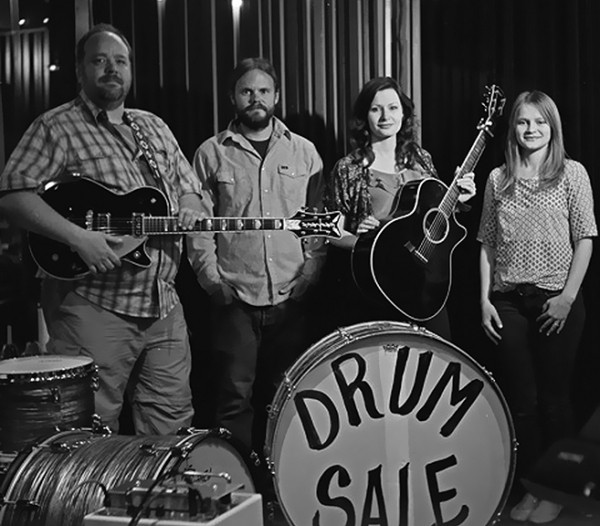 “Caleb Meyer, he lived alone in them hollerin’ pines/ And he made a little whiskey for himself, said it helped to pass the time.” So goes the first couple of lines of folk singer Gillian Welch’s song “Caleb Meyer,” the namesake of local roots-Americana quartet The Hollering Pines.

The band’s harmonizing female voices may sound familiar, since sisters Marie Bradshaw and Kiki Buehner were previously members of the well-known country/blues group The Folka Dots, which has since disbanded. But The Hollering Pines, which came together almost exactly a year ago, have an electrified sound that’s influenced by both old-school country and modern Americana folksies, as heard on their debut album, Long Nights, Short Lives & Spilled Chances, released in September.

“I think with The Folka Dots, our focus was on acoustic instruments, more on traditional music, and I guess a lot of people would call it old-timey,” says main songwriter and guitarist/lead vocalist Bradshaw. “And I think, at least for me, I wanted to start making some music that was more like what I listen to. [The Hollering Pines are] definitely more Americana and more … drums and electric instruments.”

Long Nights, Short Lives & Spilled Chances was recorded live in May with Scott Wiley at June Audio in Provo. The Hollering Pines began laying down tracks with the plan to record only a demo or an EP, says drummer/harmonica player Dan Buehner (of the now-defunct The Trappers), “and then it came together so quickly we had 10 songs in two days.” The polished finished product and the ease of its creation reflects the effortless chemistry between the four musicians (Dylan Schorer, of The Lower Lights, adds guitar).

“This group is so easy to play with, that this is just what happens when we get together and play,” Bradshaw says. “It’s not something we’ve really planned very hard or talked about. … It’s the collective sound of everybody just doing their thing, and it works well together, I think.”

Influenced by artists such as Hank Williams, The Louvin Brothers and Buddy Miller, The Hollering Pines’ stunning, twangy sound features gorgeous lap steel, pedal steel and dobro by Schorer, with the warm, cozy and often haunting harmonies of bass player Kiki and Bradshaw at the center. Flourishes of fiddle by guest artist and former Folka Dot Corinne Gentry on songs such as “Not the Only Ones” and “Wished I Was Gone,” as well as touches of organ and mandolin, add ornamentation that’s beautiful but economically utilized, with the songs’ lovely simplicity allowed to be the focus.

But The Hollering Pines’ actual sound isn’t the only sign of these musicians’ progression. The songs’ lyrics are poetic in their depiction of everyday life, the kind found at the bottom of a bottle, in a smoky bar or at the end of a lonely dirt road. Plaintive songs such as “Rainy Day Woman,” about loving someone through the hard-luck times as well as the good, and “Oh Mama,” about an adult woman meeting the mother who abandoned her when she was a child, are masterfully crafted with evocative lyrics that could make Lucinda Williams pull out a hankie.

Even though the Hollering Pines don’t completely draw from autobiographical experience for their songwriting, they have an uncanny ability to create stories that live and breathe with raw, real human emotion.

“I think all of us have grown a lot as songwriters, and I think the longer you write songs, the more you can write them about things you haven’t experienced yourself just to tell a story,” Bradshaw says. “I have an easier time putting myself in other shoes.”