A stark, anti-Western approach to the Western 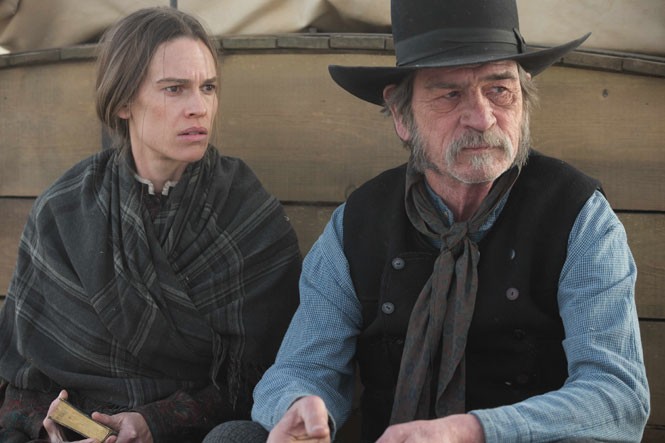 Although as a rule, promotional appearances and interviews have no direct bearing on a film itself and should be disregarded, writer/producer/director/co-star Tommy Lee Jones' comments on The Homesman prior to its release provide an interesting insight into his process. He has stated repeatedly that the film is "not a Western," and by way of explanation has given a description of the genre that more resembles Hopalong Cassidy than the essential works of, say, John Ford. Considering that The Homesman fits neither popular conception of the genre, this is a more useful external thing to take into the theater than most.

In many seemingly superficial ways, The Homesman runs counter to the traditions of the genre. Set in Nebraska, prior to the Civil War, and involving a journey eastward back across the plains to Iowa, it is already not quite far west enough, a decade or so too early, and heading in the literal opposite direction. The story itself is one rarely told in the genre: Three women suddenly and "inexplicably" (although Jones presents, without comment, some very good reasons) go insane, and are to be sent to a Methodist minister's wife in Iowa, who will arrange for their passage back home in the hopes that this will calm them back to normalcy. With the town so sparsely populated, it falls to spinster Mary Bee Cuddy (Hilary Swank) to escort the women east, accompanied by a drifter (Jones) she happens to encounter.

That central character dynamic—and the blunt candor with which Jones films the story—serves to highlight the horrors to which women were subjected at the time of its setting, and still. In strictly abjuring emotional manipulation in favor of simple presentation, Jones has probably made an even more powerful film than he would with bold angles and overbearing music. His eye for detail seizes on elements whose purpose is eventually, if not immediately, clear. The final scene contains an act barely noticed by anyone that nonetheless ties the proceedings up in a quietly damning fashion.

The details of that scene have been purposefully withheld because the most memorable aspect of The Homesman is that it ends in a way impossible to predict from the way it opens, thus making it one of the rare films that actually do spoil with foreknowledge of the plot. It's less that there's a big game-changing twist (although a liberal definition of the term could be applied) than that the story resolutely plows forth in its particular line, and it's only near the end of the picture that we see that it's ever been thus. The Homesman inspires a desire to see it a second time, to cast the first two thirds through the lens yielded by its totality.

Though as a film, it is hardly perfect, the elements that appear to be imperfections at first glance are also the source of the more provocative avenues of interrogation. The initial passage, in the town in Nebraska, feels like a pilot for a television series, as it introduces a huge number of potential storylines, with all of the perspective shifts and the editing style one might imagine in that form. This necessarily leads to a number of apparent dangling plot threads when the focus shifts to the journey east. But given the conclusion, and how The Homesman deals with forgetfulness and the randomness with which retribution finds or does not find the guilty, it's entirely possible that what appear to be abandoned, unresolved subplots are actually more support for the ongoing references to the faults of memory and justice.

With the exceptions of a slightly generic score and the occasional too-broad, caricatured performance, there isn't much to carp about in The Homesman. It's a film that encourages careful attention and a close read, and while it's nothing extraordinary cinematically, it is certainly solid and carefully assembled. It is, in short, a film that reflects its director's personality: highly intelligent, at home in the past, and stubbornly itself. It's one that, if an appreciable notch below the level of masterpiece, certainly earns its director the label of auteur. Every frame of it is A Tommy Lee Jones Film.