The House That Built Me 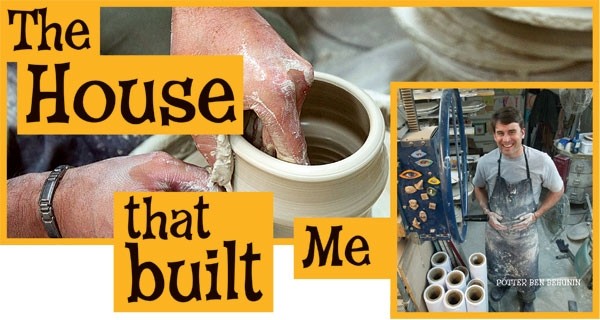 The first sign that something was wrong was when the middle finger on potter Ben Behunin’s right hand suddenly felt stiff and sore.

The pain in his hand, curled around the inside of a bowl he’d made and was wrapping for a customer, was unusual. Behunin was rarely sick, and had never had much use for a doctor.

Over the next six months, this well-known potter’s hands—the sole source of his family’s income—became progressively worse.

Behunin, then 30, couldn’t wedge clay. It hurt to load kiln shelves. He was losing strength in his hands.

But it got so bad he couldn’t pour a gallon of milk or hold his 6-month-old daughter, Eve, without excruciating pain.

Now he had to slow down long enough for a clinical diagnosis. 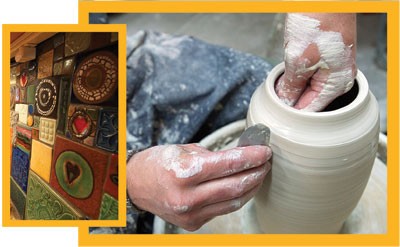 A June 2004 X-ray still hangs in his studio. It shows bone fragments floating around in his joints.

The assumption that Behunin might be able to continue his life in the same way as before, working as a full-time potter and creating art, began to crack and crumble.

“That was a big deal, basically because I felt like this was my mission in life—to make pots,” says Behunin, now 38. “This was my passion … this was all I ever wanted to do.”

Rather than feeling forced to abandon art and find a desk job, though, Behunin simply changed his method of making art. He shifted his focus from throwing pots on the wheel to making tiles and platters on a slab roller, which was much less painful. He never stopped creating; it wasn’t even an option.

That driving passion was what gave Behunin the strength to complete, mostly on his own, a massive renovation of his home in 2011 that took six months.

The goal of the renovation, a decade in the planning, was at once simple and incredibly formidable: “I wanted to make our home a temple of creativity.”

“Make No Small Plans”
On a shelf in his basement stands a quirky cup Behunin made when he was a student at Highland High School.

He was already on his way, but it wasn’t until he served an LDS mission in Germany until the end of 1994 and baptized potter Irene Adeler there that something really clicked. He returned in February 1995 to do an apprenticeship under Adeler for four months.

People would come in to the studio in Germany and talk about their lives over cups of peppermint tea. Those times would later become inspiration for a trilogy of novels Behunin wrote and published while still working hard at his pottery.

By May 1996, he was making pottery full time. He attended the Buyers Market of American Craft in Philadelphia in 2001, which opened up a huge wholesale business with galleries and gift shops (as many as 300 at one point) around the country.

Against the odds—most potters have a “real” job—he was paying bills and making a good living with just his art. He was happy.

Then along came arthritis. So did the potions and “snake oils” from well-meaning fans and friends. 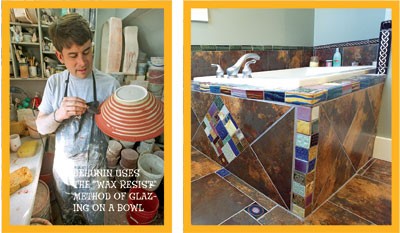 Only prescription pain medication and a change in his pottery methods would keep the pain and swelling at bay over the next seven years. Throwing pottery on the wheel caused the most pain, so he made fewer bowls and began using a slab roller—which requires less hand strength—to make tiles, platters and “slab bowls.”

“It saved my hands and gave them a chance to rest,” Behunin says.

He managed the pain and continued working as the sole breadwinner in his family.

He and his wife, Lynette, would sometimes talk about moving their two children to a different home, never finding one they liked, all the while planning to renovate the one they were in.

The plan was to take on the job himself—saving money and doing it the way they really wanted.

But how on earth would he be able to handle demolition, pouring concrete, building walls and doing jobs that can be hell on healthy hands?

“I was worried about my hands, but they had been doing well for a few months—and we were headed into summer, which is always a much easier time for my hands,” Behunin says.

The hands felt good. The money was there. The timing was right.

“One of my favorite quotes that I embossed on several tiles throughout my home is, ‘Make no small plans; they have no magic to stir men’s souls,’ ” Behunin says.

Breaking the Mold
On May 8, 2011—Mother’s Day—Behunin moved his family out of their home and into the basement of his in-laws’ home in order to start work.

This was to be no ordinary renovation.

Behunin didn’t want another McMansion or some utilitarian, nondescript home when he was done. He wanted to build—or rebuild—a home that his kids would be proud to claim someday.

“There is a spirit to place,” Behunin says. “When you thoughtfully imbue a place with creativity and detail and color, it takes on a spirit of its own. Many children grow up with art around them. I wanted to see what might happen to kids who grew up in the middle of art.” 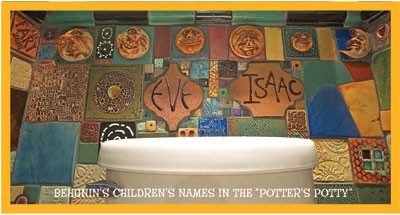 Behunin estimates he put in about 2,200 hours on his home, using 2,000 pounds of thinset mortar and 400 pounds of grout to help pull the final look and feel together.

For months, Behunin logged 12- to 18-hour days, trying to both provide for his family as a potter and tackling the monumental renovation, which began with tearing the roof off the place. There were huge setbacks, like a flood in the basement where they were storing everything.

Work continued inside, where, after the walls went back up, he laid thousands of his own handmade tiles by himself all over the house.

Outside, he used a welder, chop saw, plasma cutter, anvil and “a lot of colorful words” to create more whimsy and wonder, sometimes using junk pulled right out of dumpsters.

Was it the work of a madman? Even Behunin began to wonder at some points.

“Ben is definitely a genius, but he could not have done what he did if he were not willing to break the mold of traditional conservatism,” says Becky Conover, who toured the home in December with her mother. “That takes courage and maybe a little madness.”

Not completely insane, Behunin employed an out-of-work friend and also hired contractor Mike Allred, whom he found on the web, to help with framing, finish work and siding.

“He’s a stud—there’s no question about it,” says Allred, who has worked on hundreds of homes. “It’s the most eclectic thing I’ve worked on by far. The thing about Ben is how he combines dissimilar materials and makes them look like they belong together.”

Allred was impressed by the saving and planning that took place prior to the project and the herculean efforts of one man.

“That is so rare to meet someone who has the discipline, self control and vision to do that and the guts to try and pull that off,” Allred says.

His “blisters had blisters,” Behunin says, but he was now lean, stronger and in the best health of his life.

As the weeks dragged on, the paint—21 vibrant colors—finally went up on the walls.

Still, his pottery work suffered. He would wake up early, work for a few hours on pottery, then work on the house all day, and then go back into the studio in the evening for a few more hours of pottery. Behunin normally uses between 6 and 10 tons of clay a year, but in 2011, he used only about 3, and that was mostly after the remodel.

Behunin developed stomach ulcers and would go days without seeing his children or his wife, who was busy helping to care for her ailing mother.

“In some ways, that saved our marriage,” he says. “We didn’t fight about anything because we each had our own mountains to conquer, and we were busy. … You have to be flexible to do a project like this.”

And as work continued, something strange happened with his arthritis. A woman showed up to his studio one day and told him to try a couple of bracelets that contained rare magnets. Who knows if it was the magnets, or losing weight and eating the right things, staying away from sugars, all of the hard work—or a “miracle,” which is what Behunin figures—but the arthritis was in full retreat by the end of the summer of 2011.

He hasn’t taken a pill for pain or swelling in his hands since June 2011.

Temple of Creativity
The home people see today, inside and out, is nothing short of amazing—a “single piece of art,” Conover says, that leaves people in awe. Passing by, it’s impossible to miss the house, on 800 South just west of East High School.

On most of the stairs and around every corner inside the house are mosaics of the colorful tiles that Behunin formed and fired in his studio and backyard kiln. Nearly every room has accents or defining characteristics that are laid out in the one-of-a-kind tiles, some whimsical, others carrying a blast of spirituality.

The “potter’s potty” in the basement is alone worth a trip to Behunin’s home for a peek—knock first, and no reading materials needed in this eye-popping potty.

Behunin put up brown tiles that bear his children’s names, Eve and Isaac, jokingly referring to them as his “little shits.”

He’s a deeply spiritual man, but not one without a sense of humor. “One of my favorite tiles says, ‘Choose the Right, Damn It!’ ” Behunin notes. “I believe God has a fabulous sense of humor. He has to—He created us all.”

“Ben marked every square inch with his creative genius, and yet it flows with unusual beauty and insight,” Conover says. “His home is like a song to be sung.”

One thing that stands out for Conover are the quotes on the tiles that are all over the house: Yield Only to Truth. Every Day Is a Bonus. Do Unto Others As Though You Were the Others. Pray Always. Proceed As the Way Opens. Come and Dine. Stay Calm. Do It. Have I Done Any Good In the World Today? Free Fart Zone. Dream Big. Be Satisfied. Simplify.

There are many, many more.

The Behunins moved back into their jaw-dropping home Nov. 15, 2011, after six months of almost constant construction. 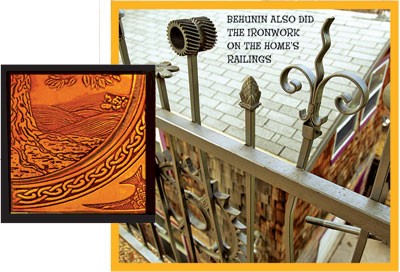 “Even if there was a night of loud noise over there, we would just mention something about it the next day, and it would all quit,” says Kathy Schall, who, with her husband, Andrew, lives directly east of the Behunins. “He definitely likes his neighbors and wants to make them happy.”

And, yes, they were in awe.

“We’ve experienced how much he loves his kids—we’ve seen what he did for them,” Andrew says.

“I’m trying to convince him that we need to redo our basement,” his wife says with a wry smile. Andrew rolls his eyes and sighs at the spillover effect.

Kathy says she wishes she were as creative as her neighbor, an impact Behunin was going for when he dreamed up the project.

“It has been fun having my neighbors thank me for the gift our home is to our neighborhood,” Behunin says. “I hope my home gives people a reason to slow down as they drive past it and get them thinking about what they can do to make their world a little more charming. As they say, if we each do a little, we can all do a lot.”

The home will be open for Behunin’s annual Mother’s Day studio open houses, held May 10-12. His studio is open for appointments by calling 801-883-0146; he can also be reached via his website, Potterboy.com.