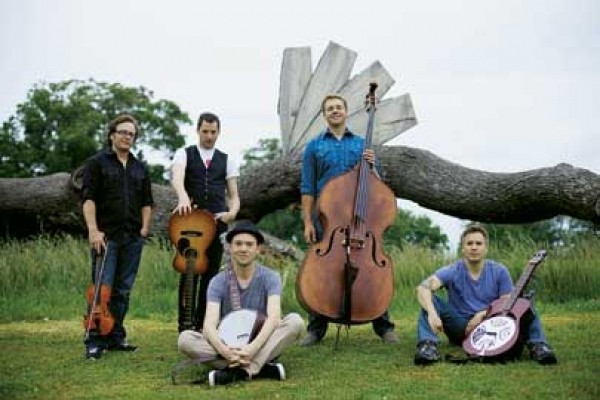 When first learning how to ski, there’s usually more crashing than progression down the mountain. But once you find your balance (and can keep both skis going in the same direction), you can not only get down the hill in one piece, but also feel comfortable enough to take risks and enjoy the ride.

And as Charlottesville, Va.-based bluegrass five-piece/outdoors enthusiasts The Infamous Stringdusters play their 2013 Ski Tour—bringing their toe-tapping ruckus of a live show to the Intermountain West—there’s no question they’ve arrived at their desired destination as musicians.

“I feel like we’ve been closing in on it for years … but I really feel like now it’s a cohesive vision,” says dobro player Andy Hall. “Now, there’s something that we all know intuitively what it is that we all work toward together. The neat thing is, when you have that level of comfort, it gives you more license to try different things musically.”

Hall, along with the other four members of the ’Dusters—acoustic virtuosos Chris Pandolfi (banjo), Jeremy Garrett (fiddle), Travis Book (stand-up bass) and Andy Falco (guitar)—allow themselves the freedom to simultaneously honor the traditions of bluegrass while pushing the genre’s boundaries. The Infamous Stringdusters’ knack for weaving traditional bluegrass instrumentals and harmonies with diverse musical influences links them to the Earl Scruggs Revue, New Grass Revival, Leftover Salmon and others.

“A lot of the music that we compose and we write doesn’t necessarily have a bluegrass beat,” Hall says. “It might have more of a rock beat and chords and even subject matter. We’re not really singing about cabins on the hill so much as we are about a variety of life subjects.

“When you study a craft like bluegrass music, where it’s very technical and there’s a lot to learn and it’s difficult,” he continues, “some of those [influences] get buried at first. But once we felt like we had done our time in bluegrass—learning the fundamentals and techniques—as we get comfortable in our skin as a band, those original influences of rock & roll, jam-band music and whatever else, jazz, all really start to come through more and more.”

That attitude of exploration, adventurous energy and an open-armed approach to life are driving forces behind both the Ski Tour—which offers plenty of opportunities for the band to hit some fresh powder between stops—and how the Stringdusters are able to effectively bring the human-based intimacy of bluegrass to large concert venues. Although best experienced live, the band’s contagious energy was effectively captured on a live-performance CD, We’ll Do It Live, released nationwide in October 2012 as part of the deluxe two-disc edition of their latest album, Silver Sky (High Country Recordings, the band’s own label).

When performing, “as opposed to being onstage and saying, ‘Look at me play,’ it’s more about … how we can make each other feel and what we can do with the energy of the space,” Hall says. “So, for us, it’s about connecting and trying to make a positive impact. There’s a lot of weird stuff in the world, so, hopefully, when people come see us … it can be something that’s uplifting and positive and also, musically, very interesting. It can be an adventure for your ears.”

With a shared musical vision in their pocket and a new album in the works, The Infamous Stringdusters’ world is full of possibilities, like a perfect day on the mountain.

“It seems like, for us, now is the beginning,” Hall says. “Once you find yourself, then you can really be productive—when you’ve got everyone going in the same direction. The future for us, musically, is wide open.”