Funny Business: Corporate malfeasance gets funny-weird and funny-ha-ha in The Informant! 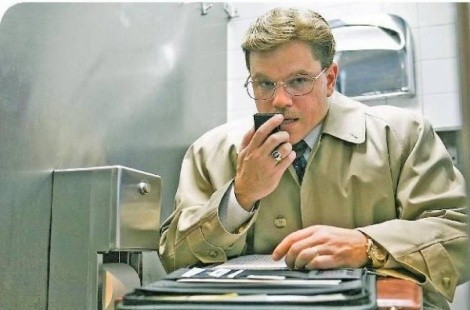 Ah, I finally figured out why I’d had it in my head—after seeing trailers and TV ads—that The Informant! was a Coen Brothers movie. Now that I’ve actually seen the movie, danged if the flick don’t feel like the Coens, if it ain’t redolent with the wonderfully odd tang of farce and feeling that they invariably bring to, at least, their lighter films.

It’s a tang that is not only wonderfully odd but, I would have thought, pretty close to inimitable. Not that I think director Steven Soderbergh is intentionally aping the Coens; I’m just absolutely thrilled that another contemporary American filmmaker is able to do what the Coens do. Here, as in the best of the Coens, Soderbergh masters tonal shifts without seeming like he’s lost control of a movie—or worse, without seeming like he doesn’t know what the hell he wants to say in the first place.

Like the Coens’ Burn After Reading, The Informant!—based on the nonfiction book by Kurt Eichenwald—is a potent satire on corporate malfeasance. It’s also a deliciously twisted—half-biting, half-poignant— portrait of the people who do corporate evil, with the added piquancy of it being based on the true story of the highest-ranking corporate whistleblower in American history. Matt Damon’s Mark Whitacre is a riddle of a man, a biochemist moved to management at Archer Daniels Midland (someday, I hope to see High Fructose Corn Syrup: A Horror Story, starring ADM as the hockey-masked slasher).

As the film opens, Whitacre is negotiating, from the victim’s side, an instance of corporate blackmail. It appears that one of ADM’s new projects—involving lysine as a feed additive, which sounds like the makings of HFCS II: The Nightmare Continues—is being sabotaged by a competitor, and the blackmailer is demanding millions from ADM via Whitacre. So the FBI gets involved, in the persons of Agents Shepard (Scott Bakula) and Herndon (Joel McHale).

And then, as the FBI is in the process of ramping up an investigation into the blackmail, Whitacre mysteriously pulls Shepard aside and tells him about something even bigger: a price-fixing scheme between ADM and its ostensible competitors that makes the blackmail look like jaywalking.

Whitacre is a queer duck; the running commentary in his head is a strange mash-up of non-sequitur trivia and reflections on brand-name products, producing a nonsense stream-of-consciousness narration for the early portions of the story that meshes beautifully with the deliberately off-kilter look to the film. Later, after we’ve learned more about Whitacre and why he behaves as he does, his narration takes on a different layer of peculiarity.

Though it’s set in the early to mid 1990s, the colors, the clothes, the haircuts and the overall look of this world reek of the kitschy ’80s (production designer Doug Meerdink deserves a special shout-out). The snappy Marvin Hamlisch score harkens back even further, to the ’50s or 60s, like maybe it was recovered from an un-produced stage musical called How to Succeed in Business by Lying, Cheating and Being a General Bastard. It all keeps you so off-balance, in the right way, that by the time you realize that perhaps the situation isn’t exactly what you think it is, it’s something even more wickedly weird and funny and depressing and piercing than you ever could have expected.

The thing about The Soup’s McHale as Herndon (who brings a zingy energy to the role) is that you might spend moments early on thinking, “Gee, I know that guy from somewhere.” Later, you may recall that he’s a comedian you’ve probably seen on TV here and there, because suddenly you’ll notice that many of the FBI agents and representatives of the federal government are played by comics—not the celebrity types, but ones that register almost subconsciously as “people I know as funny, even though they’re in dramatic roles here,” such as Patton Oswalt, Paul F. Tomkins and Melanie Lynskey (who isn’t a comic but is best known from the sitcom Two & a Half Men) as Whitacre’s wife.

Something both funny-weird and funny-ha-ha is lurking under everything going on? Sounds like modern-day corporate America to me.